“Made In —-” Re-Branding A Country for Commerce

The response to the Haitian earthquake, for example, was a global exercise in empathy. But as global health professional Alanna Shaikh implored, nobody wants your old shoes. Because, what if water is needed more than shoes? (And no, this doesn’t mean sending bottles of water instead.) Or tarp material for tents? Or heavy-duty tractors? Stick to sending money, Shaikh wrote, because only those on the ground know what’s actually necessary.

But as anyone could have predicted, the influx of donations slowed in tandem with the slowing of media coverage. So what then? As Paul Collier and Jean-Louis Warnholz convincingly argued in The New York Times, “Haitians need something more than relief from their current situation; they need jobs that they can count on for years ahead.” Read: buying shoes from Haitians is better than giving them shoes.

Indeed, we know from a cursory glance at history that trade, not aid, lifts nations out of poverty. Dismantling trade barriers and directing investment dollars to the island are givens. But can consumers also play a role in actively promoting trade with Haiti? Enter, branding. A fresh startup, BrandHaiti, aims to help Haitian businesses grow with the help of a new brand: “Made in Haiti.” By signaling the country of origin, consumers can deliberately support job creation for Haitians.

The ’Made in ___’ tag on goods is ubiquitous, but it’s hardly a featured brand asset. Rarely do we actually take the country of origin into account when making our purchasing decisions. BrandHaiti, however, would like to change that. Similarly, Oliberte is aiming to make ’Made in Africa’ a simple signal for shoe shoppers. Forget donating shoes; create jobs by buying them. The company has gone from producing 200 shoes (below) with six Ethiopian workers in 2009 to a projected 18,000 shoes this year with new operations in Kenya and Liberia. Its expansion plan includes Cameroon, Congo, Uganda and Zambia. 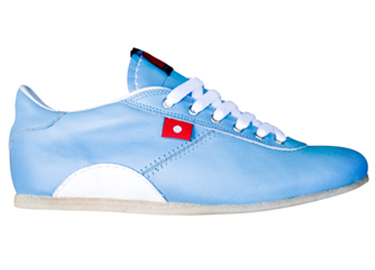 Not only is the start-up using branding to support African business, it’s dually demonstrating the manufacturing potential of a continent – that Africa, indeed, can and does produce high-quality goods. Buyers from Urban Outfitters to high-end boutiques are stocking their shelves. And that might be the golden insight of Oliberte’s endeavor: don’t just appeal to the do-gooders; use branding to help everyone re-consider the potential of an entire region.

As Xenia Viray, a buyer from a Manhattan boutique, commented, “A lot of times, consumers don’t know where anything comes from or how it’s affecting anybody. More importantly, the shoes just look really good.” Made in Africa is not meant to be a plea to bleeding heart shoppers, but to the Urban Outfitters of the world and their customers who will come to associate Africa with well-made goods. This is a long way from shoe donations.

Oliberte’s branding strategy stands in sharp contrast to the legacy of do-gooder branding campaigns like Product (RED). During the campaign, the Gap proudly noted that its (RED) t-shirts were made in Lesotho when they certainly could have been made cheaper in China. But unlike the Product (RED) campaign, which came and went and appealed to a small segment of do-gooders in between, Oliberte has ditched cause marketing for something much bolder: don’t just buy this product to support development; buy it because it’s a high-quality product you want to buy. Because that’s what Haiti and Africa produce.

Perhaps paradoxically, this message will serve development for the better. We don’t have to market altruism to make a difference. In fact, it’s probably better that we don’t. Instead of pleading with consumers to donate shoes, or to buy t-shirts out of good will, just prove that what you’re selling is of actual value to consumers. And then remind them that yes, these were made in Africa. That’s the golden association, and that’s where the power of branding will prove its worth.