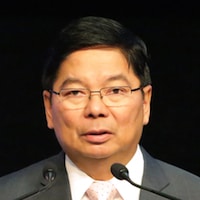 Amando M. Tetangco, Jr.assumed office as Governor of the Bangko Sentral ng Pilipinas in July 2005. He is a career central banker, occupying different positions in the organization in a span of over three decades. Immediately prior to his appointment as BSP Governor, he was Deputy Governor in-charge of the Banking Services Sector, Economic Research and Treasury.

He also represents the country in various international and regional organizations, including the Executive Meeting of East Asia and Pacific (EMEAP) Central Banks; ASEAN and ASEAN+3; South East Asia Central Banks (SEACEN); South East Asia, New Zealand and Australia (SEANZA); Center for Latin American Monetary Studies (CEMLA); and Asia-Pacific Economic Cooperation (APEC). He is the Governor for the Philippines in the International Monetary Fund (IMF) and the Alternate Governor in the World Bank (WB) and in the Asian Development Bank (ADB).

Before joining the Central Bank of the Philippines in 1974, Mr. Tetangco was connected with the Management Services Division of accounting firm SGV & Co.

Mr. Tetangco is married to Elvira Ma. Plana. They have three children: a son and two daughters.