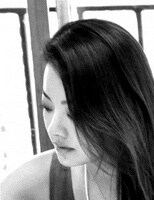 Kristie Wang is a Media Mobilizer and blog contributor at Ashoka Changemakers,a community of action that connects social entrepreneurs around the globe to share ideas, inspire, and mentor each other.