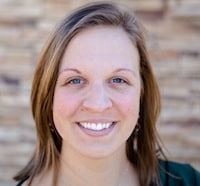 Rachael served in the U.S. Peace Corps in Benin, West Africa from 2006-2008.  She worked on nutritional product development and marketing, as well as dry season gardening to combat seasonal malnutrition.  She then moved on to U.S. food systems, where she commercial fished in Alaska and researched terrestrial protein supply chains for an environmental nonprofit.  Rachael is a MamaCarts co-founder, thinks a Colorado MBA is the way to go, enjoys fishing and camping, and also loves corgi dogs.