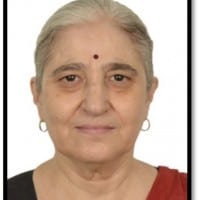 Renana Jhabvala is an economist with a decades-long association with the Self-Employed Women’s Association (SEWA) and known for her writings on informal women workers. She served as the Chancellor of Gandhigram Rural University from 2012-2017. She was a member of the UN Secretary General’s High-level Panel on Women’s Economic Empowerment, and has also been honoured with the FICCI Lifetime Achievement Award. In 1990, she was awarded a Padma Shri by the Government of India.