Empowering the Period: How Erasing the Menstruation Taboo Can Fight Extreme Poverty

Editor’s note: Throughout 2017, NextBillion is organizing content around a monthly theme, dedicating special attention to a specific sector alongside our broader coverage. This post is part of our focus on water, sanitation and hygiene for the month of August.

A wide swath of experts at organizations as varied as Goldman Sachs and the United Nations agree unequivocally on at least one thing: Educating girls makes every kind of economic sense. “Investment in the education of girls may well be the highest-return investment available in the developing world,” noted Lawrence Summers, former chief economist of the World Bank and U.S. Treasury secretary under President Bill Clinton.

According to the World Bank, the return on one year of secondary education for a girl correlates with up to a 25 percent increase in wages later in life. But wages are only part of the story. Educated girls also marry and have children later. In fact, if all girls in sub-Saharan Africa and South and West Asia had at least a secondary education, child marriage and all its grotesque social, moral and economic consequences would fall by 64 percent, from almost 2.9 million to just over 1 million, according to UNICEF.

The benefits of educating girls flow from one generation to the next: Educated girls have smaller families and raise healthier and better-educated children. 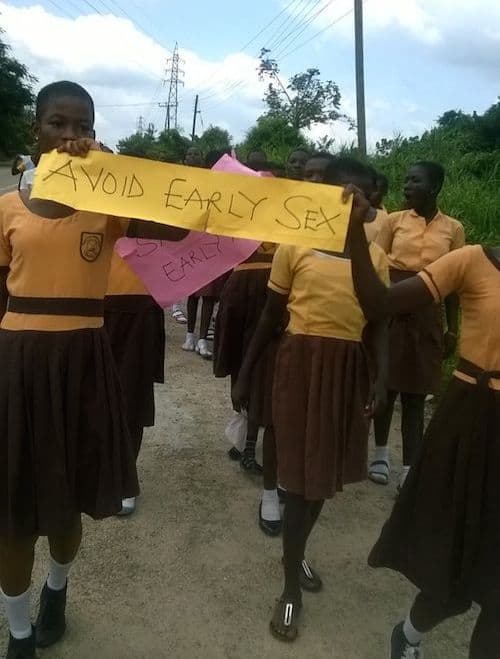 Despite the obvious benefits of education, for impoverished girls, puberty often amounts to an insurmountable obstacle to attending school. A lack of supplies, toilets and privacy are compounded by fear and shame in an atmosphere that stigmatizes menstruation, the most natural and essential biological process for half the planet. Periods can put an end to hopes and dreams.

Impoverished parents often face the desperate choice between buying food for their families or sanitary supplies for their daughters. A $5 package of pads is simply out of reach. Girls who can’t afford pads use whatever is available: old cloth, folded newspaper, even leaves. Unsanitary alternatives lead to increased infections, while a near-ubiquitous absence of toilets in schools in poor communities means there is no place to get clean during the long school day.

Some cultures even exile girls to a dirty, hot and lonely “menstruation hut” during their periods, which translates into a week of school lost each month. In Uganda, the female attendance rate drops from 85 percent in primary school to only 16 percent in secondary school, coinciding with the time girls hit puberty. Throughout the developing world, girls who must miss days of school each month have been shown time and again to fall behind and then drop out.

But there are some signs of positive change. A growing number of organizations are talking about “empowering the period,” replacing taboos and an absence of supplies with open discussion and  support. In Kenya, since 2011, the government has set aside funds to buy and distribute sanitary pads to girls from disadvantaged backgrounds, with another $5 million budgeted for the 2017-18 school year. In June, Kenya announced a new law requiring the government to provide sanitary pads to every school-going girl who has reached puberty – it becomes an obligation, rather than an option. Other nations with substantial impoverished populations should follow Kenya’s lead.

As we have seen from our own work at WomenStrong International, educated girls grow into strong, effective community leaders. At Girls’ Clubs in Madurai, India, run by WomenStrong Consortium member DHAN Foundation, adolescent girls are encouraged to study in school, learn about health and sanitation, and gain confidence and pride in being girls. We hear girls as young as 10 or 11 talk about future careers in government, law enforcement and medicine.

When a girl lifts herself out of poverty, she takes others with her. Women empowered through education tend to invest 90 percent of what they earn in their families’ wellbeing, a far higher rate than the amount invested by educated men. In addition to increasing their individual earning potential, educated women help reduce poverty in their communities and nations. A 1 percent increase in female education at the national level raises the average gross domestic product (GDP) by 0.3 percent and raises annual GDP growth rates by 0.2 percent.

To achieve the UN Sustainable Development Goal of gender equality, we must help girls develop the knowledge, skills and resources needed to determine the course of their own lives. We can help create an environment in which they have the freedom to choose their own goals, both as individuals and as members of nations they will be fully equipped to build and lead.

Sydney Rubin is a senior adviser to WomenStrong International.