Editor’s note: African countries and India may have vastly different local cultures and contexts, but they face similar development challenges. There is increasing evidence that nations in the Global South stand to benefit from learning about and replicating successful social innovations and sustainable development models created in the South and for the South. This is the first in a series of articles on this growing connection in advance of the Sankalp Africa conference in February. NextBillion is serving as a media partner for the conference.

It is a sweltering July afternoon in Cuddalore, Tamil Nadu (a South Indian state) where summer temperatures can soar above 45 degrees Celsius. Most ATMs cannot function in this heat, but innovative ATMs designed and manufactured by India-based Vortex Engineering can. In fact, they require 90 percent less power; can generate their own power through solar panels; and are about 50 percent cheaper to operate than most ATMs in the market. As a grocery store owner slides his card into the Vortex-manufactured ATM to in India, 50 such ATMs are also working across the ocean in Nigeria and Madagascar.

Another innovative financial product targeted at communities like those in Cuddalore also launched in India in 2013. m-pesaTM, is a mobile money service being jointly rolled out by Vodafone and ICICI Bank. Developed and scaled in Kenya, and also widely celebrated as a triumph of social innovation – m-PesaTM aims to facilitate cashless transactions for millions of Indians without access to formal banking services. Vortex and m-pesaTM’s examples aren’t just “what if” scenarios, but part of the growing reality of India-Africa innovation transfers.

India and Africa may have vastly different local cultures and contexts, but they face similar development challenges of social inequity and environmental unsustainability that need solutions under severe resource constraints and over crunched timescales. As early as 1987, Amartya Sen (Indian economist and Nobel laureate) wrote a white paper on “India and Africa: what do we have to learn from each other”. He explored themes of food security, political stability and women’s empowerment. The message he sought to give almost 40 years back seems clear: While developing countries can be “patriotic” about how well equipped they are to solve their own challenges; there is every reason to be “democratic” about the solution itself and be open to learning from each other.

Perhaps the biggest argument for India and Africa to build an innovation transfer corridor is that there are few other places in the world where the market is incentivized to solve challenges of low income and underserved consumers in a sustainable manner. On the “demand-side” of market incentives for social innovation – there are massive challenges. Over 225 million people in the Global South are living with malaria, and over 1 billion have no food security.

At the same time countries like Nigeria, Malawi, Ghana, and Kenya in the African continent and India are emerging as innovation hotspots. Pooled together proxies of “supply-side market incentives” in these countries like R&D investments and venture capital funding are formidable, and rival the size of similar proxies for the US. Trends at the macro-economic level are encouraging as well. India – Africa trade in 2011-12 was valued at US$68 billion and cross-regional investments at over US$90 billion. The overall trade is targeted to grow to US$ 100 billion by 2015.

How can this India-Africa innovation transfer be hastened? What are the risks? At Intellecap, we’re in the early stages of exploring answers to some of these questions. We’re using a four-part innovations transfer “lens” to identify social innovations and think through replication: 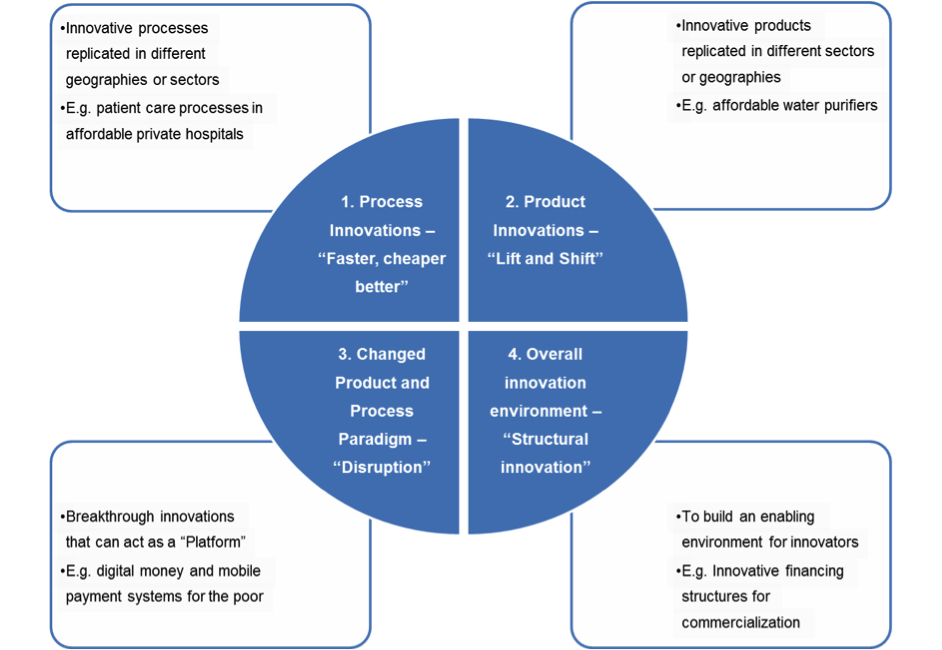 To accelerate India-Africa innovation transfer beyond anecdotes like Vortex and m-pesaTM, financial assistance as well as technical assistance must go hand-in-hand. Broader awareness about the India-Africa opportunity and greater visibility for success stories must be built. It is also necessary for local capacities to be built to implement and scale these innovations. Beyond individual innovations, the two regions can also learn more from each other about building an enabling environment for these innovations.

Of course, the are risks. Not all social innovations that are successful in one developing country can necessarily be replicated in another. Africa is a continent of 58 countries and dependent territories, of which 8-9 have the right mix of stable socio-economic conditions and minimal language barriers to form a viable innovation transfer corridor with India.

To dig deeper into this issue and also start to initiate some on-ground action; we’re expanding our flagship social enterprise ecosystem-building initiative Sankalp Forum to Africa. As part of Sankalp Africa, we will organize an industry convening of more 350 funders, entrepreneurs, intermediaries and others on February 12 and 13 in Nairobi. Social innovators like Bridge International Academies and World Health Partners poised to move from Africa to India and vice versa will be showcased as well.

Watch this space for our next article in this four-part series which will cover our on-ground learning and insights from working with African partners.

Dipika Prasad works with the Consulting Team at Intellecap where she focuses on incubation of early stage ventures. She is also part of Intellecap’s Africa expansion team and is working on a South-South knowledge corridor in inclusive development.