The 4th annual Indian Philanthropy Forum by Dasra, as usual, brought together philanthropists and investors to discuss trending social issues in India today and brainstorm effective ways of engagement with the social and social enterprise sectors.

This year a salient theme emerged through every session: the empowerment of adolescent girls. Incidentally, Dasra has announced an exciting new partnership on that very topic: USAID, the Kiawah Trust of U.K., and Dasra, have launched a $14 million partnership to address the health care needs of adolescent girls, mothers, newborns, and children in India. The alliance will focus on fostering innovation, improving health outcomes, and scaling high impact interventions (see Dasra’s research report Owning Her Future.) This constantly re-emerging theme reflects the overwhelming energy that is currently driving media attention, urgent government action, and individuals across the nation to address the innumerable social, economic, and cultural inequities that Indian girls and women face today. (The forum ended with a keynote by none other than USAID Director Rajiv Shah).

One fascinating session during IPF included a panel entitled “Not for Sale: Eliminating Sex Trafficking in India,” in which panelists precisely delineated the sex trafficking system and efforts to dismantle it. In India, 1.8 million girls (between 12 and 16 years of age) are forced into the sex industry – largely, they have been kidnapped, sold, and then trapped as slaves, and according to PM Nair of the National Disaster Response Force. This shatters them physically, emotionally, mentally, and spiritually: when he rescues them, they are “destroyed human bodies – they don’t know who they are” he said.

While eliminating sex trafficking is normally considered a thorny problem to be tackled by the justice system, policy-makers, and NGOs, there is some interesting room for market-based analysis and intervention. The key intervention points being in prevention, rescue, the criminal justice system, and rehabilitation of survivors.

Laura Entwistle from international NGO EmancipAction explained how to understand the economic drivers and how they impact behavior. She described the sex trade industry as the “most profitable business in the world, with a net profit of 70 percent.” Then, she explained, the question becomes, how do you impact the profitability of that business? Impacting the revenue (the “price” of the girl) is difficult, but “costs is where there is a big ability to make an impact. How do you drive up the cost? Drive up the risk of the business.” For example, the penalty for drug trafficking in Singapore is death – raising the stakes involved and then enforcing them can be an effective disincentive.

Nair, who has a master’s degree in sociology, a degree in law and a PhD in victimology, described innovative interventions at the justice level. For example, the ability for a defendant to videoconference in to her court case if she is refusing to be present in person has led to an exponential increase of cases getting through the system and traffickers getting convicted. From a capacity building perspective, Nair explained that business skills and resource mobilization are needed in the sector lent to this – and with a little bit of inputs, one can really see the impact on the individual. (For the Omidyar family, this potential impact must be obvious – they have invested $115 million to date in their Humanity United Foundation to end slavery, and have recently partnered with the White House and Goldman Sachs.)

Mirroring last year’s forum, this year’s IPF ended with a reputed keynote speaker – USAID’s Shah. He opened by quoting President Barack Obama, who has affirmed that the model of partnership between the agency and India has to be different today.

USAID’s current focus is to lower the under age 5 mortality rate worldwide, with the goal of eliminating child death from preventable disease or starvation in two decades. As an example of the power of collaboration, the Indian government with USAID, has set its own goals for child mortality (aiming for 31 deaths per 1,000 by 2017, saving 650,000 between 2013 and 2017.) The initiative is data-driven, using scorecards, repositioned investments, and integrated technology in every state. 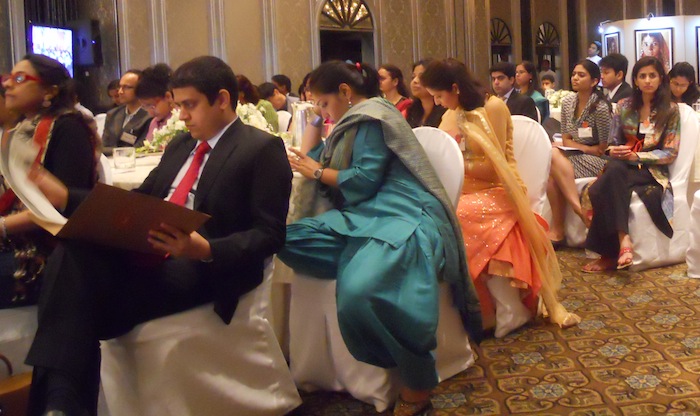 Also, in first of various references to social enterprise, Shah described the agency’s response to the earthquake in Haiti, one of the largest humanitarian efforts in recent history. Kenya-based Ushahidi helped them create SMS platform to identify the optimal locations for water delivery spots, and more. With this technology, coupled with the contributions of more than half of the families in America, about 3 million were fed, and more people had access to clean water 6 months after the earthquake than 2 days before the earthquake, Shah said. In the subsequent three years, 1.7 people have left temporary settlements, food yields have doubled, and the rate of malnutrition had decreased.

USAID is working increasingly with private sector companies – including partnership with NGO TechnoServe and Coca-Cola. He likened Coca-Cola’s engagement with farmers in Africa with a new rural partnership for Indian telecommunications company Reliance and ferilizer cooperative Krishak Bharati Cooperative Limited. In that partnership that both companies are effectively helping farmers do business better and earn greater returns. He emphasized that sustained change is not about just signing checks – for example, the logistics people at Coca-Cola and their capacity to create a product and distribute is critical.

Shah finished with a practical yet optimistic thought: “It takes years and years of sustained growth and good policies to generate meaningful development, but we have seen amazing impact in three years.”

Perhaps this is an indication that the new face of USAID is embracing better models of development and co-working with other nations in a more thoughtful way – perhaps this good work can even, in time, clean up the tarnished image of the agency of the past, borne of years of dubious intent and impact.

At the very least, it can set an example for newbie philanthropists, that investing in social change is not about just signing checks, but about equally shared collaboration with a sharp eye for metrics and methodology.