The Ford Foundation announced today the appointment of Roy Swan as director of its Mission Investments team based in New York. Swan will lead a dedicated team managing the portfolio announced in April, when Ford committed to invest $1 billion over the next ten years in mission-related investments (MRIs). His team also leads one of the nation’s largest portfolios of program-related investments (PRIs), which Ford pioneered in the impact investing field. A well-respected investment and corporate executive with a passion for using finance to achieve social impact, Swan will begin his new position on January 4, 2018.

Before joining Ford, Swan held several high-level executive roles at Morgan Stanley, most recently serving as Managing Director and Co-Head of its Global Sustainable Finance team, which has committed over $13 billion in community development investments since 2010.  Swan also served as the bank’s Community Reinvestment Act (CRA) Officer, CEO of Morgan Stanley Impact SBIC, and Trustee of the Morgan Stanley Foundation.

“Roy brings such a wonderful balance of corporate investment and social impact experience to the foundation,” said Darren Walker, president of the Ford Foundation. “We are truly fortunate to have him lead our growing team and push forward our commitment to mission investments.” 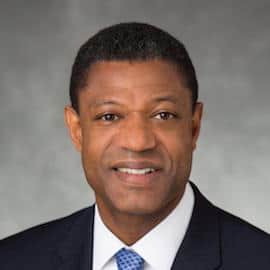 “Although we are sad to see Roy go, we are excited for him to continue to use his extensive experience with community development in this new opportunity,” said Audrey Choi, Chief Sustainability Officer and Chief Marketing Officer at Morgan Stanley. “We wish him all the best and look forward to seeing the great work to come out of the Ford Foundation in this important area.”

The foundation’s overall goals with its mission-related investments are to deliver significant mission impacts over the long-term while seeking to achieve a total return consistent with prudent risk taking. With vast investment experience, success in managing portfolios, and a commitment to social returns, Swan is perfectly suited for this position.

“I am honored that the Foundation has entrusted me to help it generate positive community impact through its historic mission investments initiative,” said Swan. “I’m excited to join an immensely talented team and bring with me the successful lessons learned at Morgan Stanley to contribute to Ford’s Mission Investments efforts.”

Swan received his bachelor’s degree from Princeton University and a J.D. from Stanford Law School, where he was an editor on the Stanford Law Review. He serves on several nonprofit boards including The Dalton School, Enterprise Community Partners, Low Income Investment Fund, and the Partnership for After School Education. He also serves on the advisory boards of several private equity funds including Brightwood Capital, HCAP, and the NEF Multifamily Affordable Rental Housing Preservation Fund.

“We’re delighted to have Roy on board,” said Xavier Briggs, vice president of Economic Opportunity and Markets at Ford. “He has immense experience and leadership ability, and with our partners in this exciting field, he’s so well positioned to innovate — to help the market grow with integrity and produce meaningful impact on people’s lives.”