Titans of Industry Turning to Social Biz : Nine former Indian head honchos who are changing the world of social entrepreneurship

You know the drill. Work hard, become a millionaire or billionaire, and now that you have it all, why not give most of it away to make the world a better place. It happens to the uber-rich including the likes of Bill Gates, Warren Buffet, Michael Dell and Pierre Omidyar. Once you make that difficult climb on Maslow’s hierarchy of needs, self-actualization becomes the final frontier. It combines new challenges with the urge to make the world a better place. At SocialStory we have scoured the universe of Indian corporate bigwigs who have scaled the heights of their chosen worlds and have now decided to make the switch to the world of philanthropy. We have left out the likes of Azim Premji and Sunil Bharti Mittal because our primary criterion is that they should have switched to the philanthropic role full-time. Read on to find out more about these ex-corporate heroes who have now assumed avatars of social investors and social entrepreneurs.

1) T.V. Mohandas Pai, ‘non’ co-founder of Infosys who nearly became CEO of the IT behemoth is now investor in social VC firm.

Former CFO of Infosys, Pai is no stranger to philanthropy. He was a seed investor in mid-day school meal program ‘Akshayapatra Foundation’ and has always been an outstanding contributor to society winning the Forbes philanthropy award in 2012. AkshayaPatra was founded in 2000 is currently the world’s largest mid-day meal program for school children, feeding 1.3 million kids daily in 8,500 government schools, across nine Indian states.

But his biggest bet in social impact came earlier this year when he joined Ranjan Pai (no relation) from the Manipal Group and Silicon Valley legend Vinod Khosla in investing in Unitus Seed Fund. “India’s biggest challenges are in the BOP (bottom of the pyramid). Government-led solutions have failed to address this fully over the last 65 years due to bad design, inadequate execution and corruption. It is time to have new engines of execution and therefore market mechanisms in the form of social enterprises, many with a profit motive, that’s what is needed to tackle this,” said Pai about the investment.

Among his other philanthropic pursuits are an attempt to make Bangalore a better place to live through the Bangalore Political Action Committee (BPAC), which he co-founded with other Bangalore luminaries like Kiran Mazumdar Shaw and Harish Bijoor. He also involves himself actively doing various charitable activities in Mangalore, where he hails from originally.

Having been an early stage investor in search giant Google, you could day that Khosla has an eye for big-ticket investments. In the recent past he has been investing in social ventures from money forked out of his own pocket. Perhaps his most famous investment in India was his grant to SKS Microfinance when it was still a non-profit, which he then followed up with an equity infusion, after it turned for-profit. Since then Khosla has set up Khosla Impact, Khosla Labs and is also one of the investors in Unitus Seed Fund. Some of the investments made from Khosla Impact include Babajob, Driptech, Eyenetra and Embrace.

In 2011, he pledged half of his then estimated fortune of $1.4 billion to charity, through the Giving Pledge, an initiative started by Warren Buffett and Bill Gates.

Sycamore Networks founder Deshpande, at one time was the richest Indian in the world, so the US-based entrepreneur is flush with the green stuff. Deshpande does most of his social entrepreneurship related work through the Deshpande Foundation. The foundation is based in the US and India has a plethora of activities.

The Deshpande Innovation Network (DeshINet) is a network of universities that encouraging innovation, supporting entrepreneurship and accelerating the creation of social enterprises that have market impact. The Deshpande Foundation in India, uses a ‘bottom-up’ approach to build scalable solutions, and is attempting to create a mini-Silicon Valley using the ‘Sandbox’ approach in Hubli, Karnataka.

The Deshpande Center for Technological Innovation (Deshpande Center) was established at the MIT School of Engineering in 2002 to increase the impact of MIT technologies in the marketplace. To date, the Deshpande Center has funded more than 90 projects, with more than $11 million in grants. The 26 ventures that have been spun off into commercial ventures have collectively raised in excess of $350 million externally. Deshpande is the only Indian appointed by US President Barack Obama to the co-chairmanship of the National Advisory Council on Innovation and Entrepreneurship, a group established to support the Obama’s innovation strategy

Shah is the founder CEO of Singapore-based investment-bank DeGroup DeConseil. Two years back, Shah decided to use a novel approach to venture investing by starting a fund focused on Indian social enterprises called India Social Fund (ISF). Shah is different because he’s not raising his money through the usual pension or college endowment funds but through corporate donations. His plan was to raise Rs 25 crore at that time. For ISF social comes before returns and therefore expects to generate lower returns from its investments. It will seek returns of 15-18 percent, much lower than the 25-30 percent that most venture capital firms expect.

ISF will invest, on average, Rs 50 lakh in social enterprises that aim to improve the lives of the poor, and in patented and mass-market technologies or innovations by scientists outside government institutions. Example: ISF is backing a scientist of a vehicle exhaust system that would completely eliminate particles emitted from cars. Another investment was in Shine Retail, which hires a team of shoeshine boys and put places them in places like airports. Their income has apparently gone up from Rs 3,000 to Rs 7,000 per month. 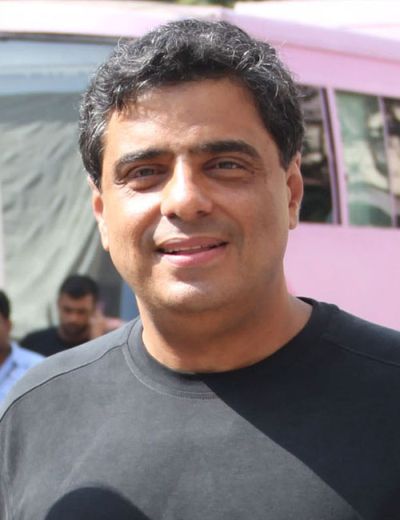 Screwvala, MD of Walt Disney, is one India’s best known media barons believes in investing both his time and money into social enterprises that have potential for impact. He may have money to burn- he cashed in on 50 per cent stake sold to Walt Disney for Rs 2,000 crore- but time comes at a premium, especially when he logs in 70 hours at Walt Disney.

Screwvala deploys his capital through Swades Foundation, which invests in rural development, and has a team of about 200. The areas of their work include water and sanitation, livelihoods, agriculture, health and education. Their goal? Impact the lives of one million people in rural India by 2017. His foundation, which has a capital outlay of Rs 1,000 crore, over the next five years is supported by Unilazer Ventures, a company that Screwvala founded and supports with his own funds.

6) Vineet Nayar, the HCL man who made his company respected and feared now embarks on a second journey:

Nayar, is a doyen in the Indian IT services industry, his philosophy of putting employees ahead of customers and innovative business strategy, helped HCL Technologies go from a $700 million to a $4.5 billion company.

After cashing in on his stake in HCL (Rs 43 crore in 2010 and 133.58 crore in 2012) and exiting the company he has been devoting himself fully to his non-profit Sampark Foundation, which he established in 2004. He was itching for a full-time role way back in 2005, but being offered CEO’s job at HCL meant that he had postpone his plans: now he’s ready. Sampark wants to create a million smiles through work in livelihoods, education, climate sustainability and entrepreneurship.

His work has earned him a mention in ‘48 Heroes of Philanthropy List 2013’, an initiative from business magazine Forbes. 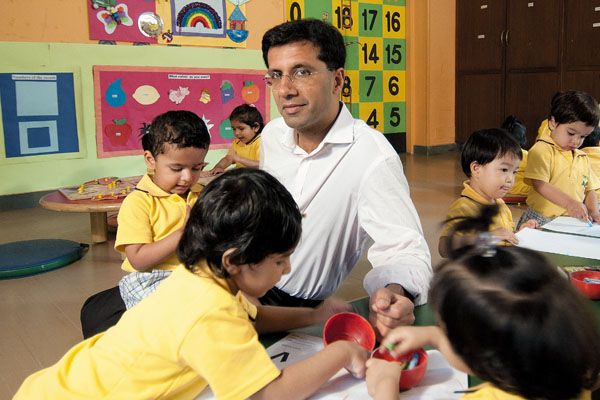 When Dhawan was 30 he started private equity firm ChyrsCapital. But he promised himself that he would embark on a second career before he turned 45. He made good on that promise when he started Central Square Foundation in 2012.

Dhawan was already on the boards of not-for-profits in the education sector, like Teach For India, Centre for Civil Society, Janaagraha and GiveLife, so he wasn’t a complete greenhorn when he decided to turn his eye to the education sector. The education sector has always been close to his heart. He won a best teacher award when he was in school and also used to teach low-income children in the Harlem area in New York.

Dhawan’s ambition is not just invest in the education sector but to revolutionize it. CSF’s investment philosophy is two-fold: one, make seed-stage investments in non-profit education startups, and secondly boost research and advocacy efforts to better understand the education sector. In 2012 he was one of the winners at the Forbes India ‘2012 Philanthropy Awards’. (Image credit: Forbes)

CSF already has made a few investments: 3.2.1 Schools is a network of affordable schools, Mindspark Learning Centers, offers blended learning for math and hindi, India School Leadership Institute (ILSI), is a programme for training existing and aspiring school principals and Akanksha, is a network of 13 high performing schools in Mumbai and Pune.

Dikshit may be infamous for avoding jail time while pleading guilty to violating US laws through his company Partygaming and forfeiting $300 million as part of the verdict by the US Department of Justice. But he most certainly will be remembered for his tremendous charitable efforts in the years to come. A self-made billionaire, who is media shy, Dikshit set up the Kusuma Trust UK (Kusuma), an independent grant-making organization in 2008 that all its work in India.

The areas that the Kusuma Trust focuses on are education and life opportunities for disadvantaged children and young people. It also supports innovation, new developments in higher education and training and advocacy. Dikshit’s generosity, has helped spawn many stellar non-profit organizations, including Bangalore-based Centre for Internet and Society, an organization that has been doing exceptional work in research and advocacy.

Other partners that Kusuma supports are Sadhana, the Tata Institute of Social Sciences, the Juvenile Justice Department and UNICEF, the Kusuma Seva project.

Padaki co-founded MeritTrac in 2000, and turned it into one of India’s most most successful training and assessment companies. After Manipal Education bought a 70 percent stake in MeritTrac, he continued to manage the company but relinquished his role in April 2013. Now he has decided that he wants to change the face of rural entrepreneurial ecosystem through Head Held High, a social enterprise focused on villages.

Padaki’s eyes light up every time he talks about his latest project HHH, where he first started as a mentor and investor, but then decided to become on a full-time role because he saw the tremendous potential the startup had. He’s proud of the company’s progress so far. The first of which was to take a bunch of uneducated youth, put them through a rigorous 12- month training, through their subsidiary Village BPO Pvt. Ltd and turning them into white-collar BPO employees servicing MNCs.

He believes he’s just begun and has a great big plan to change the face of rural India through entrepreneurship. Padaki has even coined a term for it: ‘rubanomics’, a combination of rural plus urbans and economics. His goal for HHH is to make a hub for all village entrepreneurs, create employment opportunities for rural youth and boost trade in villages.

Nelson Vinod Moses is the editor of SocialStory, a NextBillion Media Partner.

Tags
Base of the Pyramid, impact investing, philanthropy