UPDATE: Landwasher was selected by Fast Company for its list of The World’s 50 Most Innovative Companies 2013 sharing the stage with companies such as Nike, Amazon, Apple, Google and Samsung.

When I was heading up New Ventures Global, one thing I very much enjoyed doing was spending time with entrepreneurs on the ground whenever I got the chance. At the time we were also trying to find a way to make New Ventures Global self-sustainable to some extent rather than purely grant-financed. Since China is the place where New Ventures’ companies tended to grow bigger and more internationally ambitious, I thought we might have our solution there.

Even though I am a Chinese national myself, it was usually at the third meeting when an entrepreneur truly opened up his or her mind to me, after they figured out that I was genuinely seeking a way to better support them rather than just going through a formality. As it turned out, as much as our entrepreneurs appreciate those “free” business acceleration services from us, they also wanted “our skin in the game” to make the relationship longer term and business-oriented. Multiple entrepreneurs said almost the same thing to me: “Why don’t you guys provide financing yourself? We apparently have no access to patient capital, and you sure need to reduce reliance on grant money. We should be in this together!”

The entrepreneurs also told me that we were only scratching the surface of their problems with conventional services such as capacity building and investment facilitation. Instead of lack of specific skill sets and connections, their root challenge is lack of an ecosystem of support that would have encouraged patient capital and facilitative policies to begin with, among other things.

The collective wisdom of these entrepreneurs thus led to the idea of establishing China Impact Fund (CIF) in early 2012 to work with New Ventures China (NVC) under an impact financing plus accelerator hybrid model. The bigger vision for CIF/NVC is that it will play a leadership role in constructing an ecosystem of support that China’s environmental and/or social entrepreneurs very much need. From our side, since most of the local entrepreneurs that we have worked with don’t speak English, we also see CIF/NVC play a key part in more effectively communicating their impact stories moving forward.

Fortunately, we got some generous support from the RS Group, a Hong Kong-based family foundation, as we moved forward to look into the feasibility of setting up CIF. As encouraged by the RS Group, we saw the need to turn the feasibility report into an external study to give the rest of the world a more structured view of China from an impact investing perspective. Hence Creating the Chinese Dream, which to our knowledge, is the first English-language report on impact investing in China.

What makes this report unique is that it serves as a practitioner’s guide to impact investing in China’s green SMEs and all the case studies are based on existing CIF and/or NVC-supported companies. We interviewed many people on the ground, including investors, entrepreneurs and policy makers, to make the report comprehensive and help set out 11 action-oriented recommendations at the end. Nevertheless, although we cover them in the report, there are a few misperceptions about impact investing in China that I believe deserve even more attention:

China may have a lot of investment capital going around, either domestic or from overseas, but patient capital is few and far between if any. Government agencies at different levels, like their counterparts in other countries, simply don’t have the experience and capacity to do impact investing by themselves, let alone the fact that the concept is still totally foreign to them.

Compared with the vigorous activities occurring to build impact investing in other developing countries, the Chinese market remains a relative “white elephant” in such discourses. Meanwhile, the global importance and inter-linkages of the Chinese economy, and its growing influence in other emerging markets, is increasingly apparent. More importantly, facing worsening environmental problems and social inequality, China is now at the crossroads where innovative but realistic approaches will need to be introduced from outside to help transform its development model. Impact investing, with its focus on maximizing social and environmental impacts without letting go economic yields, seems to be a viable solution. This suggests that impact investors who are concerned with international emergence of this asset class cannot afford to remain disengaged from its development in China.

?Despite the fact that China is now the world’s second largest economy, it is still a developing country and will remain so for a long time to come. China ranks around 90th worldwide in terms of per capita GDP,[1] barely half the world’s average, and China still has a population of at least 150 million people below the UN poverty line of US$1 a day per person.[2]

In China’s context, BoP refers to low-income people and disadvantaged groups, including rural villagers with a below-average living standard, the vast population of migrant workers and their children, and the so-called “ant citizens,” whose salary barely covers the costs of the reaching a basic living standard in urban areas. By this definition, China’s BoP should stand at a minimum of 400 million based on our rough estimation.

BoP issues tend to be community-based issues, and by their nature, Chinese SMEs are well positioned to contribute to impact on BoP living conditions mainly because: 1) SME employees often come from the BoP segment; 2) SME supply chains and/or business models are integrated with other businesses or services provided by the BoP segment. A good example would be Landwasher, a CIF portfolio company that manufactures environmentally responsible toilets utilizing water-free flushing technology. The majority of Landwasher’s nearly 200 employees are from a BoP background. Because of this, Landwasher is particularly keen on enhancing its R&D efforts for waterless toilet solutions targeting at China’s rural communities and even expanding its business to other emerging markets with similar BoP needs.

Local investors are indeed very commercially focused in their objectives, which is really not a surprise given China’s current stage of development. However, this does not necessarily mean that these people don’t have impact in their genes. On the contrary, the spirit of impact investing could actually be traced back to some of China’s traditional concepts such as Ren (meaning benevolence or humanity especially towards disadvantaged people), as we argue in the report. The impact pulse of local investors can be fully harnessed given time and proper stewardship. In the meantime, the following three things need to be done to help the process:

3) An impact ecosystem of different stakeholders. 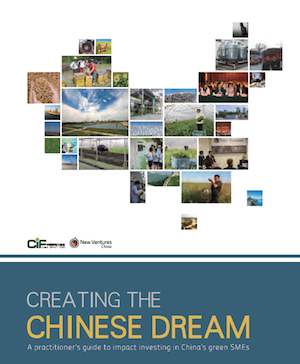 Having worked across different emerging markets, I feel strongly that China has an abundant supply of “feel good” and “feel right” ventures as combined impact investing opportunities. As we explain in the China report, impact investing, if properly leveraged by all stakeholders, is well positioned to serve as a catalyst for positive transformation of China’s development model over the coming decades. More importantly, with the Chinese economy being increasingly integrated with rest of the world, impact investing has the potential to not just change China – it could change the world.

About CIF: CIF is China’s first impact investor focused on “missing middle” environmental SMEs, including those with an environmental value proposition for the country’s BoP population. CIF works with New Ventures China under an impact investment plus accelerator model to support these companies in financing, enterprise acceleration and impact assessment. To date, CIF has selectively invested in New Ventures China companies from several different environmental sub-sectors. CIF can be followed on Twitter @cifund and on its Facebook page.