Achieving Sustainable Energy for All Hinges on International Cooperation and Leadership

Sustainable development is simply not possible without sustainable energy.

This message was at the heart of a recent event organized by the Center for Global Development (CGD), Embassy of Denmark, and Climate Advisers, “Delivering Sustainable Energy for All: Opportunities at Rio+20.” At this event, UN Secretary General Ban Ki-moon and other distinguished speakers gathered to discuss how to move beyond the message to tangible action and solutions, with a specific focus on how and why the United States can, and should, take a leadership role.

About 1.3 billion people in the world, one in five, lack access to electricity and an additional 1 billion have only intermittent access. Meanwhile, 2.7 billion people—40 percent—lack access to clean cooking fuels and rely instead on wood, coal, charcoal or animal waste for cooking and heating. Over 95 percent of the energy poor live in sub-Saharan Africa or developing Asia, and 84 percent are in rural areas.

Without access to energy, “it is not possible for people to work themselves out of poverty,” CGD Founding President Nancy Birdsall pointed out in her opening remarks. Yet, we are confronted by the reality that progress in global poverty reduction could be reversed by climate change if the world does not shift toward sustainable energy, and fast. As Ban later told the audience, “we cannot power ourselves to prosperity as we have done in the past.”

The Sustainable Energy for All Initiative

Ban is leading a global initiative on Sustainable Energy for All that engages stakeholders from all sectors (public, private, and civil society) to propel a global shift towards sustainable energy. To achieve this shift, the initiative has set three interwoven and complementary objectives set to be accomplished by 2030:

This year was designated the International Year of Sustainable Energy for All by the UN General Assembly to raise awareness and promote the three objectives: clean energy access, energy efficiency, and renewable energy. 2012 is also the year of the Rio+20 UN Conference on Sustainable Development, to be held in late June. The moment is ripe for action, and lofty goals have been set, but where to begin? 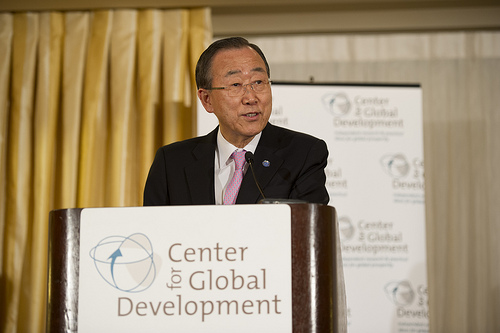 Sustainable energy for all cannot be achieved without a concerted effort at the local, national, regional, and international levels. The effort will require action from business, governments, investors, community groups, and academia. As Rio+20 approaches, the UN Secretary-General is trying to give the conference more focus by getting world leaders to commit to a single goal—sustainable energy for all. Many, including the Secretary General, are looking to the United States to play a more active role. Yet President Obama still has not committed to attend, and he may not, since some think this type of UN summit could be politically risky for him during an election year.

Nigel Purvis, visiting senior associate at CGD and CEO of Climate Advisers, spoke at the event to launch his report, Energizing Rio+20: How the United States Can Promote Sustainable Energy for All at the 2012 Earth Summit. In the report, he and Abigail Jones call on the U.S. to take a leadership role in sustainable energy for all.

Rio+20 represents a significant opportunity for progress and Purvis and Jones believe that the U.S. can energize Rio+20 if it follows these four major recommendations:

Purvis and Jones argue that it is in the U.S.’ interests to follow these recommendations, since doing so would advance U.S. economic, development, and climate goals in addition to boosting its political capital domestically and abroad.

Beyond the United States: Who is Already Taking a Leadership Position?

Some regions have already been working hard to achieve sustainable energy for all. For instance, in 2009 the Asian Development Bank (ADB) launched the Energy for All Partnership to provide modern energy access to 100 million in Asia and the Pacific region by 2015. Based at the ADB Headquarters in Manila, Philippines, the partnership serves as a regional platform for cooperation, exchange, innovation, and project development. Just as the UN Secretary General envisions for his own initiative, the partnership engages stakeholders from all different sectors; the steering committee has among its members an impact investment fund (E+Co.), an investment banking boutique (ReEx Capital Asia), and a national government body (The National Electrification Administration of the Philippines), to name a few.

The ADB-led partnership is not just a concept, very real things are happening on the ground. On June 4, 2012, the ADB will hold its second Energy for All Investor Forum, in partnership with New Ventures, the World Resources Institute’s center for environmental entrepreneurship. The Investor Forum will convene a select group of clean energy access companies and investors as a pre-event to the 7th Asia Clean Energy Forum. Companies will have the opportunity to present to the investors, financial institutions, and donors that are part of the Energy for All Partnership, along with ADB investment/project officers.

The Investor Forum also will give the ADB an opportunity to add more companies to its project database, helping to strengthen its investments and increase its project portfolio so that 100 million more people in Asia and the Pacific region really will have energy access by 2015.

This example of a regional partnership in full swing is a clear move toward action. Imagine what could be achieved if there was the same level of commitment and coordination at an international scale, starting with Rio+20. Sustainable energy for us all could be within our reach, and with that, our sustainable future as well.