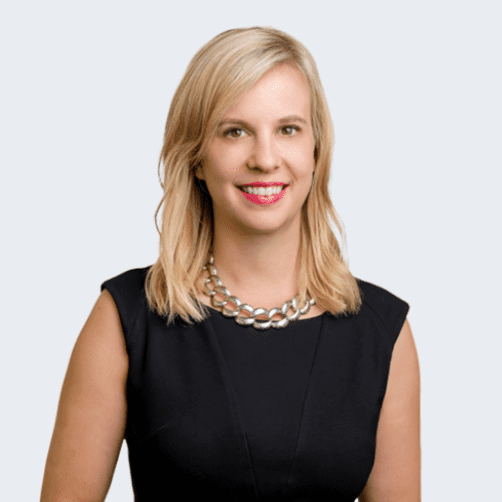 Inspired by the opportunity to reinvent the way we back new ideas and support entrepreneurs who are creating a more equitable and sustainable world, Allie joined Village Capital in 2016, and was named CEO in January of 2019. In her role at VilCap, she’s responsible for overseeing our team of “rabble rousers” who are dedicated to creating new opportunities for entrepreneurs who have been traditionally overlooked by early stage investors.

Prior to joining Village Capital, Allie spent seven years working directly with technology pioneers Steve and Jean Case, supporting their work in venture capital, philanthropy and impact investing. As a senior executive at the Case Foundation, Allie was responsible for oversight of the organization’s communications, marketing and partnerships functions. In that role she helped to create campaigns that advanced the Foundation’s philanthropic mission, including the development of the “Be Fearless” campaign, which later inspired Jean Case’s bestselling book of the same title; as well as a number of campaigns to support the organization’s field-building work in impact investing. She was also part of the team that co-created the Startup America Partnership, a private sector initiative of the Case and Kauffman Foundations created in response to President Barack Obama’s cross-agency effort to promote entrepreneurship around the country. Within two and a half years, the Startup America Partnership helped launch 32 startup states, cultivate corporate partners and resources, and build a network of more than 13,000 startups across the country.

Allie’s work on helping to build entrepreneurial ecosystems outside of major venture capital hubs extended to her role at Revolution, the venture capital firm created by Steve Case, where she served as part of the core team who created and launched the Rise of the Rest initiative. Starting with a four-city pilot, the Rise of the Rest has gone on to become a significant national effort spearheaded by Case, along with a $150M venture capital fund focused on supporting entrepreneurs outside of New York, California and Massachusetts. As the SVP of Communications at Revolution, Allie also helped to build the profile of the firm’s first institutional funds, Revolution Growth and Revolution Ventures, and worked closely with its portfolio companies to provide strategic guidance on marketing and communications strategies.

Prior to joining Revolution and the Case Foundation in 2009, Allie worked in the technology and media space, holding communications roles with AOL and Discovery Communications, and began her career in financial and corporate communications, working closely with early stage venture-backed B2B companies in the early 2000s.

Allie’s passion for supporting entrepreneurs solving some of the world’s toughest challenges also goes beyond US borders: from 2013-2018 she served as a board member to Nairobi-based Sanergy, a hybrid enterprise focused on providing affordable and accessible sanitation in urban slums. She also currently serves on the Advisory Council for the Center for Innovation and Entrepreneurship at the George Mason University School of Business.

Allie holds an undergraduate degree from Boston University and an MBA from Thunderbird School of Global Management.