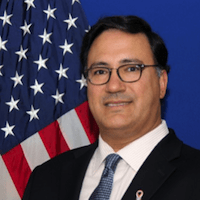 Ariel Pablos-Méndez is a physician, scholar, diplomat and creative leader in global health. He was appointed in 2011 to lead the Global Health Bureau of USAID, the premier agency in international development. During his tenure, he catalyzed the vision to End Preventable Child and Maternal Deaths and contributed to shaping an AIDS-Free Generation while supporting health systems strengthening, family planning and country ownership during the economic transition of health.

Dr. Pablos-Méndez began his public health career at Columbia University working on the emergence of multi-drug resistant tuberculosis in New York City in 1991; in 1997 he led the Global Surveillance Project on Anti-Tuberculosis Drug Resistance at the World Health Organization (WHO). He also served as Director of Knowledge Management at WHO in Geneva, 2004-2007, creating WHO Press, working to bridge the know-do gap in public health and promoting e-Health in the developing world.

In 2007, he returned to the Rockefeller Foundation as Managing Director, where he was a program officer from 1998 to 2004 spearheading public-private partnerships in R&D for diseases of poverty (e.g. the Global Alliance for TB Drug Development), the Foundation’s strategy on AIDS treatment in Africa (2001), and the Joint Learning Initiative on Human Resources for Health. From 2007-2011 he developed and led the Foundation’s initiative on the transformation of global health systems towards universal health coverage.

Dr. Pablos-Méndez received his M.D. from the University of Guadalajara (Mexico) and his M.P.H from Columbia University (New York), where he was a Professor of Clinical Medicine and Public Health. He has over 100 publications and has been a member of various boards and international commissions.