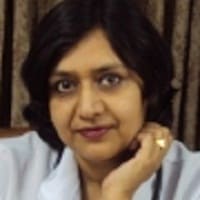 Dr. Shelly Batra, the founder and president of Operation ASHA, is a gynecologist and obstetrician in New Delhi, India. For the past two decades, she has provided consultations and performed free surgeries for the poor. She is the author of two books published by Penguin India, is a fellow guide and professor in the gynecology department at Batra Hospital, the largest private hospital in New Delhi, and was named an Ashoka Changemaker. She earned medical and master’s degrees from King George’s Medical College, Lucknow, India.