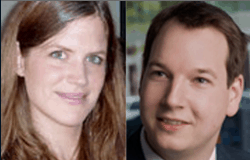 Konstanze Frischen first heard about Ashoka while working as a journalist and researching a story on social change. Fascinated by Ashoka’s concept and the stories of its Fellows, she decided against merely writing about social entrepreneurs and instead joined Ashoka in 2003. She founded and was managing director of Ashoka Germany before joining Ashoka’s global leadership group in 2008 where she is now responsible for the social business platform and Ashoka Globalizer program. Born in Germany, she spent formative years in Costa Rica and the United Kingdom. Intrigued by how different people see the world, Konstanze studied social anthropology at the University of Heidelberg, the School of Asian and African Studies and the London School of Economics, and worked on questions of identity, politics, and development in Israel and in Indian shanty towns. She originally became a journalist to communicate her findings to a large audience, and worked for reputed outlets such as CNN International in London, Canal Siete in San José, and Die Zeit in Hamburg, as well as for Germany’s distinguished FAZ where she was a business correspondent for three years.

Felix Oldenburg serves as Europe Leader and Director Germany. An entrepreneur and expert at the interfaces of the social, business and political sectors, Felix has launched a number of national and international programs that accelerate the spread and impact of social innovations. Before joining Ashoka, Felix started an online business and worked for management consulting firm McKinsey&Company in London. As director at a political consultancy, he pioneered citizen consultations for governments and foundations, including the European Citizens’ Consultations in 27 countries. He speaks and publishes on social entrepreneurship, citizen engagement, and corporate social responsibility. Felix studied Philosophy at the universities of Bonn, Tübingen and Oxford and acquired an Executive Master in Policy Management in Washington DC (Georgetown).