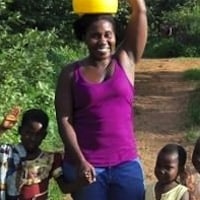 Imani M. Cheers is an award winning multimedia producer and Assistant Professor in the School of Media and Public Affairs at George Washington University in Washington, D.C which she joined in May 2013. Before joining the faculty at GWU, Cheers was director of educational resources for PBS NewsHour, where she managed all educational resources for the program’s website, which averages more than 50,000 hits a day and more than 10 million unique visitors a year. She also managed the NewsHour’s student reporting labs program, a global journalism initiative that has partnered with sites in the Middle East, Africa and South America. Previously, she was a producer/writer at Howard University Television and a multimedia producer/intern at Newsweek.com.

Before that, she was a community organizer at the DC Rape Crisis Center in Washington, D.C. She received her BFA in photography at Washington University in St. Louis, a Master’s degree in African Studies and Research from Howard University and her doctorate in Mass Communications and Media Studies at Howard. She is a member of the National Association of Black Journalists, the National Association for Media Literacy Education, DAWN (Diaspora African Women’s Network) and a 2013 New Media Fellow with the International Reporting Project.