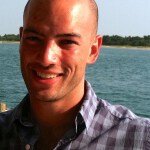 John Converse Townsend is a writer, editor and a connector of people across the world of social good. John is a media manager at Ashoka Changemakers covering entrepreneurship and smart solutions to social problems.Follow John on Twitter @JohnCTownsend