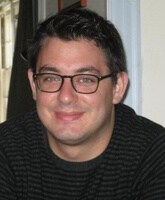 Michael joined the GBF team in 2010 as communications officer. He is responsible for leading their communications staff in branding and messaging, as well as media outreach, speaking engagements and activities.

Prior to working with GBF, Michael worked with Africa Action to direct policy and communications. He also has experience at the Institute for Policy Studies, Service Employees International Union, and several non-profit organizations in Southern Africa.

Michael’s work in the field of development and human rights has led him to travel extensively in Ghana, Rwanda, South Africa, Uganda and other parts of the world. He holds a B.A. in Sociology from Bluffton University in Ohio and has taken graduate courses at the University of Cape Town, South Africa. In his time away from work, Michael enjoys hosting social engagements and building relationships with people from all around the world with diverse professional backgrounds.