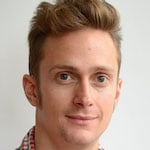 Phil Mader is a research fellow at the Institute of Development Studies in Brighton and author of the 2015 book “The Political Economy of Microfinance: Financializing Poverty.”