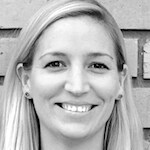 Sarah Hewitt leads Fundación Captial’s operations in Tanzania. She is in charge of the implementation of the Graduation project in Tanzania, which will be implemented under the Tanzanian Social Action Fund. She has worked in East Africa since 2009 and has a decade of experience partnering with governments, NGOs and private-sector organizations. She earned a master’s degree in business and has a passion for economically empowering women and youth living in poverty.