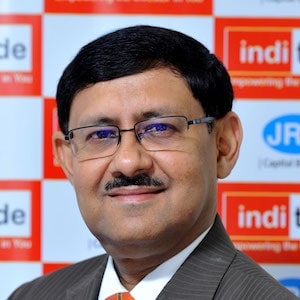 Sudip Bandyopadhyay is Group Chairman at Inditrade Group of Companies. Recognized by the International Who’s Who, he is a Chartered Accountant and Cost Accountant with more than three decades of experience in various areas of finance and financial services. He has been part of various large conglomerates such as Hindustan Unilever, ITC and Reliance amongst others.

During his 16 years stint with ITC as Head of Treasury and Strategic Investments, he managed investments in excess of $1.5 billion. Sudip was also responsible for the acquisition of strategic stakes in several other companies, by ITC. At Reliance Anil Dhirubhai Ambani Group he was instrumental in leading its foray, amongst others, into Equity and Commodity Broking, Financial Products Distribution, Commodity Exchanges, Gold Coin Retailing, Money Changing and Money Transfer. Sudip was also responsible for the acquisition of AMP Sanmar through which Reliance launched its Life Insurance business.

In his last assignment, Sudip was the Managing Director and CEO of Destimoney, a full service financial organization, promoted by New Silk Route – an Asia focused growth capital private equity firm with over $1.4 billion under management.

It is Sudip’s long term vision to ensure Inditrade is an active participant in nation building. He firmly believes that Inditrade is today at a stage where it can take a quantum leap by pioneering change in the agri lending & micro lending space, while building on its strength in the personal finance domain, in a substantial and sustained manner.

Sudip sits on the Boards of a number of listed and unlisted domestic companies and is also an investor in many Fintech and other Technology related ventures. Sudip also has regular presence in electronic and print media.

A visionary, Sudip is always on the lookout for emerging trends and new opportunities that they would unfold; a trait which he tries to inculcate amongst those who work and interact with him.