A Missing Opportunity for Investment: Bringing the Bedroom to the Boardroom

Last week, 1,600 venture capitalists, philanthropists and entrepreneurs gathered at the 2012 Social Capital Markets conference to discuss the question at the heart of impact investing: How can investments do well while also doing good? Consistent with the in-depth nature of SOCAP, panels examined every aspect of capital flows, including how to structure a business, how to move an idea from a prototype to scale, and where to invest for maximum impact. The resulting conversations gave rise to multiple technical suggestions—and one paradigm shift. In order to do well and do good, multiple conference participants argued, investors must incorporate a gender lens into their portfolio.

One session at the end of the week explored an investment that capitalizes on the social, environmental, and financial returns made possible by the gender lens approach. This investment would yield huge returns for women, children and families, and even for the planet itself. And while some might see it as an “odd duck,” as moderator Peggy Clark, vice president of Policy Programs at The Aspen Institute and executive director of Aspen Global Health and Development, described it, panelists confirmed that it is imperative, a triple-bottom-line investment. “It’s really impossible to make a serious dent in the development challenges we face today without addressing this issue,” explained Karl Hofmann, CEO of Population Services International (PSI).

Then why, Clark pushed, has such a powerful investment been historically limited to support from philanthropy and grants? Was it an undeveloped idea stuck in R&D? Was the potential market not large enough to incentivize investors?

No, and no, Dana Hovig, CEO of Marie Stopes International (MSI) explained: “We have the technical knowledge; what we need are the resources, the financing, and the political will.” Moreover, “There are at least 215 million women in developing countries alone who want the outcome achieved by this technology but can’t find it, can’t afford it, or don’t trust it.” Filling this unmet need would save the lives of 150,000 women; moreover, in places like Bangladesh, every $1 invested in this area has been shown to save $10-15 in healthcare, utilities, education, and infrastructure, Hovig said.

Then why? the moderator asked, what has kept this issue from the mainstream?

Controversy, the panelists agreed. The intervention is family planning.

In recognition of the highly charged issue of family planning – which Clark pointed out, “almost shut down the United States government three times” – the panel was named “Stepping on the Third Rail: Family Planning and Social Capital Markets.” Decades of controversy have marginalized family planning in almost every development arena; for example, when the Millennium Development Goals – the priority social and economic growth targets for 2015 – were set, family planning was added as an afterthought. Today, it remains an under-achiever among the goals. Recently, however, there are new signs of readiness on the part of mission-driven organizations to include family planning as a key piece of their work, whether they focus on the children, the communities in which they live, the environment, or the women themselves.

This past summer, for example, some of the world’s biggest investors stepped up to embrace family planning. Panelist Julie Bernstein, a senior communications director for the Bill & Melinda Gates Foundation, described how Gates collaborated with the UK’s Department for International Development (DFID) to line up commitments to reproductive health from investors and developing country governments alike.

Gates and DFID’s joint venture, the Family Planning Summit, raised more than $4.6 billion in commitments – including $40 million from Bloomberg Philanthropies and $25 million from Merck for Mothers. The money pledged will reach an additional 120 million women and girls in the world’s poorest countries over the next eight years, preventing an estimated 110 million unintended pregnancies and 50 million abortions and saving the lives of 3 million babies and 200,000 women and girls, supporters say. At the same time, Bernstein said developing country governments are making new efforts to establish reproductive health as a priority, and donors like the Gates Foundation and Bloomberg Philanthropies are working to unroll new family planning programs.

Other major players are following suit. In the week before the panel, former President Bill Clinton announced another groundbreaking partnership: In exchange for a six-year purchasing commitment from a coalition composed of the UK, US, Norwegian and Swedish governments, the Clinton Health Initiative and the Children’s Investment Foundation, Bayer HealthCare agreed to slash the price of its long-acting implant, Jadelle, by 50 percent. As a result, 27 million more women in developing countries will have access to contraception.

Yet even with these steps forward, and despite evidence of its cost-effectiveness and its cross-sector impact, family planning remains dramatically underfunded. In order to explore why, Clark led Bernstein and fellow panelists Hofmann, Hovig, and Astrid Zweynert, deputy editor at the Thomson Reuters Foundation; in a discussion of the role that investments could play in realizing the triple-bottom-line of family planning.

The first step, they agreed, is simply naming family planning as an impact investing priority. This requires moving the issue from the margins, where it currently stands, to the center of social causes, Zweynert advised: “Family planning is not seen as a global issue that affects women or has repercussions for other issues. It’s isolated.”

It also requires courage to claim the issue despite controversy. “Investing in sex takes bravery,” said Hovig. Clark agreed, answering an audience question with the statement that “There’s no way around it – we have lost ground on this issue.” The controversy surrounding the issue prevents people from talking about it – and, she added, “If we don’t talk about family planning, we probably aren’t going to invest in it.” 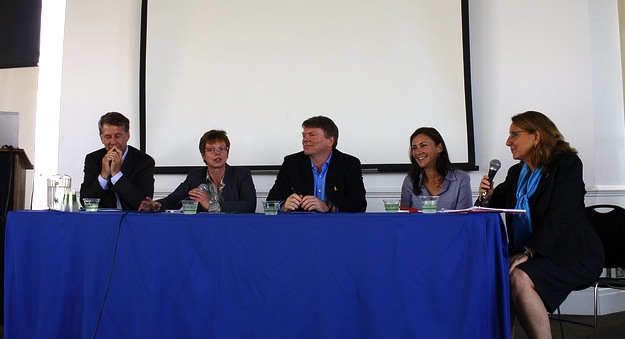 To this end, Bernstein explained Gates has launched a communications campaign around contraceptives called No Controversy that has been well received in removing the taboo on parents’ ability to determine the timing, spacing and number of their children. “Every girl and every woman deserves the ability to control her future.”

Hovig underscored Bernstein’s point – family planning changes lives, and saves them. “If we delivered family planning to these women who want it, we would save the lives of 150,000 women each year,” he said.

Empowering women to space their children makes them more resilient in the face of increasingly volatile weather patterns, including the rising instances of natural disasters, drought and famine, while simultaneously slowing population growth for lessened carbon emissions, environmental impact and competition for scarce resources.

So what nascent mechanisms can be implemented to funnel money from social capital markets to family planning?

Hofmann explained the need: “Organizations like PSI have been financed largely by government. However, that capital flow is drying up a bit, and in this climate of limited resources risk-averse tendencies are growing. … Performance-based finance is one way to get around this; we guarantee a specific outcome. Investors in this area essentially buy future outcomes. And if this works, everyone wins.”

To harness the power of the private sector, PSI hopes to release an Impact Fund in the coming months that investors could pay into – and be paid back out of, plus returns. Hofmann added that he hopes to get a program up and running in Niger, the country with the highest total fertility rate in the world despite already lacking the food and water to sustain its current population. For $2 million over the course of three years, he said, “I could get up and running a meaningful social marketing campaign for contraception that would raise the prevalence of contraception and achieve results.”

Hovig agreed on the power of the private sector’s role to expand services and information. “We’re talking about huge scale. We have scalable solutions. Investing in this space can make a huge difference in hundreds of thousands of women’s lives.”

His suggestions? First, exploring social impact bonds, which have been piloted by the UK and are in development in countries like the United States and Australia, as a results-based financing mechanism that could enable MSI to expand its current 2,000-plus clinical sites in 38 countries.

Second, a building a social investment fund to provide bridge financing for MSI as it works to broker deals with pharmaceutical contraceptive supply companies and other manufacturers in China, yielding a surplus that would be split between MSI and the investor. And third, supplying program-related investments (PRIs) that would allow MSI to purchase their franchised clinics, paying out returns with the money saved on rent in the long run. These suggestions are expanded on here.

Bernstein suggested creating an arm of community health workers similar to the health extension workers in Ethiopia who go door-to-door, making injectable contraceptives easy and portable. And Zweynert circled back to the communications cause: setting up a news wire to train journalists in developing countries to discuss contraceptives and broader reproductive health.

The panelists concluded SOCAP’s first-ever panel on family planning with the hope that their conversation would ignite the creativity of the social capital marketplace, exploring these and other investment mechanisms to help bring access to family planning to scale.

SOCAP is devoted to the concept that there is a false barrier drawn between doing good and doing well; that there are investments that can serve the twin human impulses to help oneself and to help one another. The ethos of the conference unites the brain of the private sector, the spirit of the entrepreneur, and the heart of the social sector.

Family planning has the returns, the challenges, and the impact to speak to all three. But are we listening?