Counterfeit pharmaceutical drugs, a $75 billion dollar industry as estimated by the U.S.-based Center for Medicine in the Public Interest[1], represents a huge industry tapping into the BoP. The converse, anti-counterfeiting, is also a large market and a report by Global Industry Analysts, Inc. estimates that by 2015 anti-counterfeiting technology will be an $82.2 billion dollar global business. While the innovation counterfeiters employ to evade getting caught can be impressive, within the pharmaceutical sector counterfeits contributes to 700,000 deaths annually.

Sproxil is trying to limit counterfeiters hold on the pharmaceutical market in emerging economies by literally putting the power in the hands of the end consumer through cell phones.

As Ashifi Gogo, founder and CEO of Sproxil, explained in a talk hosted by the William Davidson Institute, giving end consumers the ability to check for counterfeits allows Sproxil to create demand from the bottom-up. When consumers demand that retailers only offer original medicines, those retailers then demand the same of the distributors, which in turn put pressure on independent wholesalers.

Here’s the model: Each pharmaceutical product using Sproxil’s technology has a scratch-off code on the back of it. The consumer sends a free text with the revealed identification code to a pre-identified number. A text is then automatically sent back to the consumer with either a confirmation the drug is genuine or a notification that it’s fraudulent. In the text, Sproxil also notes whether the identification code has been sent to a consumer before. Consumers also have the option to call and speak with a representative if they can’t read the text returned by Sproxil. Thus far Sproxil has received more than 750,000 texts from over 500,000 consumers, Gogo said.

Using scratch off technology, the same method used for topping off cell phone minutes in emerging economies, ensures most consumers already understand how to use the system; that is, they know that a pre-scratched code is no good. Since Sproxil’s launch the company has caught numerous new counterfeiter ploys including dilution of real drugs, deception of consumers by telling consumers certain brands are no longer using Sproxil, and cargo theft that resulted in stolen products being sold to unsuspecting consumers. 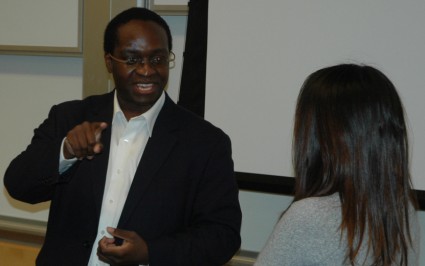 (Ashifi Gogo, founder and CEO of Sproxil, speaks with University of Michigan students at a WDI talk).

Sproxil often partners with governments in the countries where they operate, and currently has staff in India, Kenya, Ghana, Nigeria, the USA, among other countries. The relationship helps governments reduce the amount of resources they need to put into counterfeit crackdowns as well as reduce the number of deaths due to counterfeits. In turn governments help Sproxil draw attention to the issue of counterfeits and raise awareness so Sproxil gets more texts. In fact, in most places Sproxil resembles a government program to consumers.

Sproxil’s customers include Johnson & Johnson and GlaxoSmithKline. The value for these manufacturers is multifaceted: avoiding brand damage, increasing sales from regaining market shares previously covered by counterfeits, and gaining market intelligence. As you imagine, there are also many possibilities on the type of product information that Sproxil can collect for their customers beyond where counterfeits enter the supply chain. Such data includes information on the distribution of different products across the country, how long it takes products to be sold once they reach a retailer, as well as how long it takes the drugs to move through the supply chain starting with the manufacturer.

Earlier this year, Sproxil received a $1.8 million Acumen Fund. Sproxil aims for each subsidiary to be profitable in two years, so far their operations in Ghana and Nigeria are already profitable, Gogo said. Sproxil charges customers for authentication, analytics, advisory services, and next year it will offer text-based advertising to its list of services. Those ads will be tailored for different products in the authentication SMS.

Sproxil is competing with companies offering a range of validation systems. But Gogo said many of those technologies have downsides. He said holograms can be easily imitated, chemical tests are expensive, bulky and slow; and so-called briefcase testing can be useful, but is thus far difficult to scale. Sproxil also faces competition from companies with similar technologies, but so far, Gogo said that these competitors have concentrated on different geographic regions than Sproxil has.

(Check out a CNN story on Sproxil below):