The Companies Act has Promise, but Will India Inc. Cash In?: Business value and social good can converge if companies shift focus from compliance to results

There is much excitement here in India around the potential of the year-old CSR component of the 2013 Companies Act to deliver on social impact. It’s the world’s first nationally-mandated CSR law and stipulates that 2 percent of corporations’ profits must be spent on CSR.

However, the surge in CSR spending stemming from the new law will only be successful if execution looks markedly different from how CSR and philanthropic money has been spent in the past.

Two percent of profits is a sizeable number for any major business. For some of the larger corporations it represents over 100 crores (over $16,000,000 USD) of annual expenditure, and approximately 15,000 crores ($2.4 billion USD) for the economy as a whole, annually. To put that in context, 15,000 crores is enough to provide clean solar lighting to all the 400 million people currently dependent on unsafe kerosene lanterns or candles, according to calculations from the work we’ve done in the sector. These funds can send 40 million children back to primary school, and keep them there for an entire year, based on Dalberg analysis. Hence, it is imperative that such funds are used wisely.

Sub-scale, Unsustainable or Both

Most traditional CSR spending has suffered from either being sub-scale, unsustainable or both.

Some of India’s largest corporations have compliance-based CSR programs that provide an unending drip of funding year-on-year, with no clear sense of what change that is really achieving on the ground. Consequently, instead of creating both social and economic value, many have simply created a culture of dependency between the community, the partner NGO and the company.

With the new act in play there will be increased management scrutiny, especially given the level of financial outlay. The added accountability itself means that companies need to think about what they are getting from their investment. This is where the opportunity lies.

Every company has a set of social issues, conspicuous or not, which play a strong role in its profitability and financial health. A successful CSR strategy can help address these. We see three core principles for the creation of an effective CSR approach.

Most social initiatives, government led or not, suffer due to weak implementation. There are massive funds, at both the state and national level, to tackle nearly every major social challenge. Yet hundreds to thousands of crores lie unspent for want of execution capacity. A recent study by the National Institute of Public Finance and Policy revealed implementation gaps in the central government’s flagship social development schemes. In 2012, the unspent balance across these schemes was 24,519 crores (over $4 billion USD). Corporations have strong execution capacity, which is why it is critical that CSR activities be designed according to the core skill sets that a company can bring to bear. In many cases these skills not only relate to the end product, but also are embedded within the processes of the company.

For example, many food and beverage manufacturers are in reality highly efficient logistics and marketing companies. They can tap into existing knowledge and resources to help deliver medicines at minimal costs in hard-to-reach areas, or create health awareness campaigns. Similarly, Ashok Leyland, a truck manufacturing company, runs AIDS awareness and prevention programs in its factories in Hosur (Karnataka), for about 350,000 commercial vehicle drivers. The initiative stems from the company’s access to a high-risk group, existing training facilities, and its long-term stake in the health choices of the driver community. There remains significant opportunity for corporate India to leverage actual execution strengths in its approach to CSR.

Promote the Broader Objectives of the Company

Similarly, it is critical that corporations link CSR tightly to broader strategic aims. Social initiatives often change based on the personal passions of senior management or short-term pressures. Prioritizing issues to target on an abstract sense of need is the wrong place to start—need is everywhere. This limits social and business value creation. Aligning CSR initiatives with broader strategic business objectives maintains long-term focus and effort. 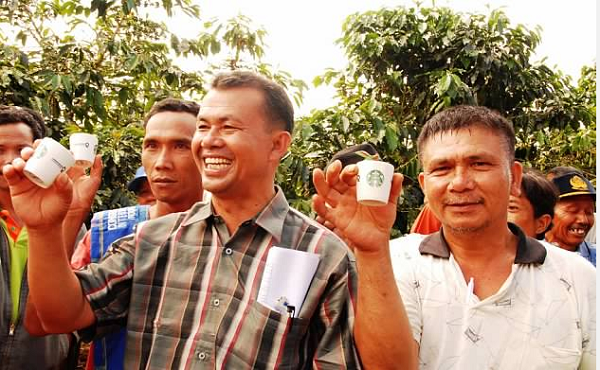 Starbucks, in its bid to both secure its supply chain and enhance its brand, launched the C.A.F.E. Movement. This initiative helped coffee farmers become more productive and self-sustaining, and improve their skills. Several large-scale NGOs are now partnering with Starbucks to continue expanding this initiative. It’s a clear win-win for the business and farmers.

Novartis’ Arogya Parivar initiative in India has similarly driven value by combining health education and low-cost sales force models to provide medicine to previously untapped markets. While it began as a social initiative, its success can help position the company to more profitably serve a large market at the base of the pyramid.

Beyond strong execution and link to strategy, a connection with employee passion is a must.

Palpable evidence of change—in even the most well-designed and brilliantly executed initiatives—becomes visible only over an extended period of time. Shared passion can help sustain effort and provide an important emotional connection with employees. Many companies have been able to use the internal and external goodwill driven from social initiatives as a way of achieving either cultural change or winning the war for talent.

A 2013 global survey found that Indian employees place a premium on corporate social responsibility, and 51 percent of the employees surveyed believe that it is important that their employers act responsibly towards society. Both the Tata and the Mahindra groups continue to enjoy a significant premium in the marketplace with their reputation for ethically minded senior management, and for being frontrunners among businesses that contribute to the social fabric of India.

The above are simple principles, yet these are often lost when companies have to either be reactive or respond to an influx of proposals from well-intentioned civil sector organizations. Doling out cash is the easier way out. To create tangible impact requires that company managers think of implementing CSR initiatives like they would think about a new line of business. This means starting with strong leadership alignment and commitment. It is time to move beyond compliance and use CSR to more effectively drive business and social value.