Leading India’s philanthropy sector forward with clear direction and ever-increasing energy, Dasra hosted its fifth annual Dasra Philanthropy Week March 5-7. Over the years, it’s grown into a powerful initiative convening more than 600 prominent philanthropists (including, this year, Jennifer and Warren Buffet via webcast, and Nadir Godrej), corporations and impact investors to catalyze funding to India’s social sector. According to Dasra, the event has catalyzed INR 172 crore ($27.8 million) in funding and increased media mentions of philanthropy by 44 percent in the months following the forum.

A notable and strategic shift in Dasra’s strategy is its central focus on adolescent girl empowerment, with a five-year, $14 million initiative in collaboration with USAID, Kiawah Trust and the Piramal Foundation. The shared goal is to achieve systemic change in several girl-related issues including child marriage, domestic violence, menstrual hygiene and nutrition.

According to Lynne Smitham, co-founder of Kiawah Trust, “Work around adolescent girls in India has typically been isolated and scattered and there has been little or no collaboration among stakeholders. The Dasra Alliance aims to alter this approach and build a collaborative ecosystem in order to foster, drive and deliver knowledge, innovation, funding and achieve impact at scale.” 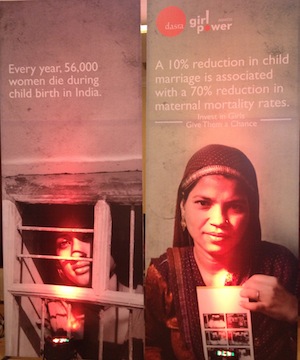 But why this sector, and why now, in India? According to Dasra’s report “Owning Her Future,” there are 113 million adolescent girls in India, accounting for 11 percent of the population, who are largely invisible and powerless. In some of the country’s least developed, most populous states, over half of all adolescent girls get married before age 18, up to 95 percent drop out of school, and over 50 percent face domestic violence. However, collectively they hold the greatest untapped potential to eradicate poverty in India. In fact, $110 billion would be added to the Indian GDP over their lifetimes by empowering adolescent girls to stay in school and delay early marriage and pregnancy, according to the report.

Toward this end, Dasra is quickly producing much-needed research on more themes affecting adolescent girls, announcing the launch of their Domestic Violence Report – No Private Matter. Dasra also announced the winners of its newly launched Girl Power Awards, in collaboration with DSP Blackrock mutual fund, which awarded grants of INR 10 lakh ($16,194) each to three high-impact organizations empowering adolescent girls. Chosen from a pool of almost 200 applications, the winners were:

• Centre for Unfolding Learning Potentials, which provides bridge courses for 700 out-of-school girls in the state of Rajasthan;

Perhaps it’s time for the next breed of Indian social entrepreneurs to take the cue and focus on the levers that make a big difference to poverty alleviation – namely, empowering adolescent girls.

Nilima Achwal currently leads the SEED program at Villgro Innovations Foundation, an India-based social enterprise incubator that provides seed funding and mentoring to social enterprises that have the potential to scale up and transform rural India.