Since PopTech’s conclusion I have been in a stupor, experiencing what I have affectionately come to term PopTech Paralysis, or, the absolute shut down of cognitive thought, typically from an imbalance between new ideas and mental processing power.

Yet over the last week my feeble and addled brain has been able to process my inaugural attendance of this self-proclaimed “idea factory” and started to apply it to my experience at the BoP. And, strangely, insights are coming from the most unlikely places. For instance, I now spontaneously “cluck” as I approach a wall. While my son sees this as some new game (and not the actions of an unbalanced father), in reality I am experimenting with the pioneering work of Daniel Kish (pictured below), who teaches human echolocation for the visually impaired. 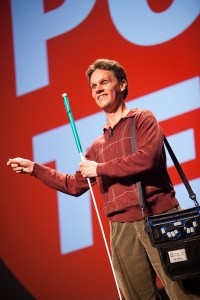 Kish’s therapy is not unlike the echolocation methods used by bats in a dark cave: by clucking at objects, Kish is able to “see” an object after listening and interpreting the cluck’s reverberation from the surrounding environment. Students from his program are so adept at echolocation that they participate in activities once reserved for the sighted, such as mountain biking. His work is a wonderful reminder that solutions to pressing issues can be undeniably simple – personally I often jump to technology as the solution to problems, when instead I should be asking myself if a humble cluck could do just as well (if not better.)

Or take the New York Times Co. R&D Lab’s prototype of its memory map application: picture a self-curated image based time-line focused on events from your life, with topics of interest appearing larger in scale and changing over time. To better see what I mean, download the World Rebalancing PopTech app, which includes a version of the NYT’s memory map. Platforms such as this may very well be the new standard for how we interact with online content, and the smart phone friendly nature of these platforms may mean it is the first and only way many up-and-coming populations at the BoP will interact with online content (hint hint: BoP focused social entrepreneurs would be wise to anticipate this change and act accordingly). 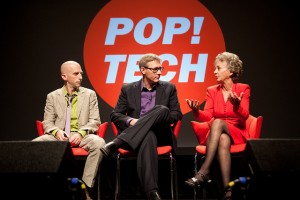 Some insights have come directly from speakers involved with the BoP. Take Bob Neuwirth (pictured at far left with Nils Gilman and Stephanie Coontz answer questions). Ever thought deeply about the global role of informal economies? Yep, me neither. Thankfully, Neuwirth has. While I am no stranger to street vendors and impromptu shops, the stalwarts of the global informal economy, I have never stopped to think about the economic significance of those same vendors when taken in aggregate. The reality, according to Neuwirth, is staggering: the combined value of global informal economies is $10 trillion (if this were a formal economy it would be the second largest in the world). Many multi-national corporations and social enterprises opt not to work within the informal economy because of the stigma that such economies operate in moral grey areas (think pirated movies). However, the majority of operators are selling legitimate goods albeit through unofficial channels (to learn more take a look at Neuwirth’s new book, Stealth of Nations.). In my own experience marketing solar powered LED lamps at the BoP, those unofficial channels were regarded as both nebulous and dubious, and so were largely disregarded – sort of an economic elephant-in-the-room. After listening to Neuwirth, though, I see that the informal economy is just too big and powerful to ignore. I now realize the enormous latent potential which I had overlooked, and urge social enterprises to find ways to work efficiently within the informal economy in order to truly maximize potential.

The most exciting and mind-blowing presentation of the three-day conference was not an incredible musical act (Reggie White was wholly entertaining), the unveiling of new technology (robots that give fist bumps and desktop DNA sequencing) or one of the seriously talented Global Innovation or Science Fellows (they made me feel like I have spent my career twiddling my thumbs). 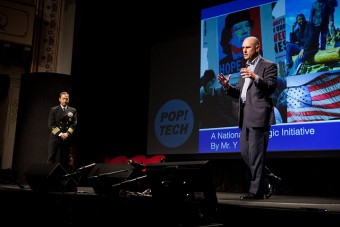 The big surprise came from Capt. Wayne Porter and Col. Mark Mykleby (respectively pictured here from left to right), who recently proposed a sweeping re-invention of U.S. foreign and domestic policy. Their proposal, titled A National Strategic Narrative, is a holistic strategy focused on “sustainment” and the overall health of “an interconnected global ecology.” My first thought listening to them was “Seriously, the DoD actually let these guys come here? They didn’t have to sneak out?” Captain Porter and Col. Mykleby are fighting against the institutional grain of global politics and envisioning a world that is not a zero sum game, but instead a world where the U.S. only wins when everybody else wins. Watch this video, whether you are American or not – YOU WILL NOT REGRET IT. If these ideas become policy it will profoundly impact BoP focused social enterprises, and I believe the impact will only be for the better.

I have mentioned only a smattering of the diverse range of quality speakers from PopTech 2011, choosing to comment on a few of the speakers whose work is directly applicable to social enterprise work at the BoP. However, I feel that this kind of direct technology and idea transfer is only an ancillary benefit of PopTech’s purpose. The real purpose of PopTech is to break down paradigms and standard modes of thinking and expose the audience to new and foreign ideas. The hope is that somewhere, in the messy and confused state this creates, a “POP” will resound from someone’s head, and this new and foreign idea will be applied in ways never imagined. So, I recommend that all of you take time and watch the videos from the 2011 presenters. But don’t just watch videos directly applicable to your field – to do so would dishonor the intention of PopTech. Instead, watch someone you would not ordinarily watch, and see what happens.

Your mind may go POP! (Or you may experience paralysis – both are normal).