Editor’s Note: NextBillion has launched month-long series on Housing for All in partnership with Ashoka. This special series coincides with two upcoming Ashoka publications on best strategies to achieve Housing for All, Ashoka’s initiatives using its Hybrid Value Chain framework to leverage changes in the affordable housing sector in Brazil, Colombia and India. Please follow the series HERE and Join the discussion with your thoughts and insights. (All photos courtesy of micro home solutions).

The megacity of Delhi, India, is home to more than 18 million people, 70 percent of whom earn between US$150-$500 per month and live in low-income settlements (urban villages, resettlement colonies, slums, and unauthorized colonies). Self-construction or incremental housing is rampant in these colonies. In reality, it is more the norm than the exception across India. Owner-supplied housing (approximately 67 percent of the total stock) currently accounts for the majority of housing and affordable rentals for millions of urban dwellers.

Although these settlements vary in density, size of plots, kind of structure and property documents, they share a common characteristic: the poor structural quality of the units. Clearly, those building the most housing in India also are those with the least access to finance and professional technical assistance. As a result, these urban households are living in precarious structures, with poor lighting, hygiene and safety conditions. 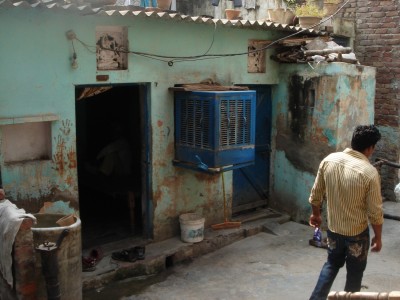 (Above: This dwelling, before remodeling or TA, housed a family of six)

Sadly, the debate on housing in India lacks the larger perspective of creating inclusive cities through the principles of urban design and planning. There is little agreement on the need to bring together interdisciplinary skill sets to address the problem. As we saw it, highly subsidized government programs are not going to solve the problem and private efforts will only work where land is extremely cheap – often on the outskirts of cities and away from livelihoods. Passionate to contribute to and further this debate, we founded micro Home Solutions on the three principles of community, sustainable design and affordability.

Thus began our task to understand the large self-construction market and design solutions that could be innovative, viable and scalable. After the first months of field research and studies, we faced an uphill task: how to enable safer and more affordable construction that is both valued by the households and serviceable by the local technical assistance (TA) providers? 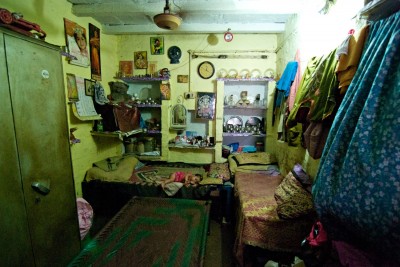 (Above: The inside view of the same house from above – where six people sleep and store everything. Below, the inside of the same home after TA – quite a contrast in light, order, storage space, and privacy). 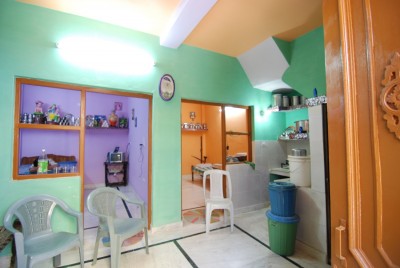 mHS conceptualized a housing product and service that would bring customized design solutions and access to finance to households in low-income settlements. In partnership with BASIX, a large microfinance institution, we developed a home-improvement finance product (US$6,000) and provided access to customized engineering and architectural advice. Our aim was to bring safety to home structure and, through better layout design, improve ventilation and lighting. The client would pay a fee of 3.5 percent per loan to cover the costs.

The pilot began in Mangolpuri, a low-income urban settlement in Delhi where residents are given a 99-year license by government as part of a slum re-settlement program. A typical plot is a meager 21 sq. meters with an opening in the front, and with neighbors on all three sides. With ground floor quickly reaching its maximum capacity, many households are adding rooms vertically to accommodate family expansion or additional income by offering rentals.

Is safety a value-proposition?

We learned quickly that households have emotional investment in their house that overrides safety issues. The façade and aesthetics are as important as its functionality, or its role in safety or hygiene. For example, many have used ceramic tiling to cover the exterior facade, and marble floors for the kitchen, even at the cost of not finishing the full construction.

When colleagues from Mumbai came to evaluate our work and met the residents – structural safety ranked low among their list of priorities. Neighbors were quick to dissuade our clients from shoring up weak infrastructures, pointing to homes that had been standing for the last 20-30 years, asserting (without facts) that the probability of an earthquake is low. 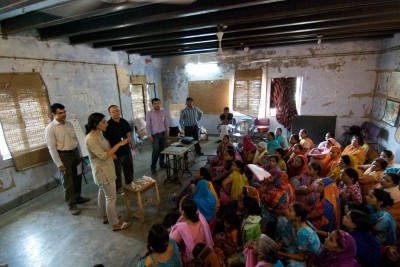 (Above: Rakhi and Marcos Ferrario explaining the value of TA to potential clients)

In addition, safer structural strength often means a bigger column that compromises the precious floor space inside the house, a cut that many residents are unwilling to take. Even though not a high priority for their investment, many residents complain of leaking roofs and continuous and costly maintenance efforts. Regardless of their concerns, their “perceived risk” or “safety concern” is not imminent enough to make the investment.

Among the families who participated in the pilot project, there is now some pride in differentiating their house as safer from the others. This was especially true after Delhi experienced three tremors in the last two months (Delhi is located in Earthquake zone 4 out of 5) and an unfortunately collapse of a 6 story building in East Delhi that killed over 70 renters.

The majority of the units are three and four stories, built on single brick masonry walls or with reinforced cement concrete frames that in most of the case are completely inadequate to support upper floors. These structures may work well to sustain vertical loads, but have no chance to endure lateral forces, for example, earthquakes or strong wind. We didn’t yet have a solution for retro-fitting existing buildings to make them safer, so at first, we only worked with households building from scratch, or families living in one-floor structures who were ready to demolish it.

The TA package included two initial visits, one to understand the household needs and preferences, and a longer meeting to develop a customized solution along with input from the clients. Families were shown 3D images, and actual layouts and plans. During the pilot, the most intensive part of the TA was the monitoring visits. Initially programmed bi-weekly, it soon became clear that this was the most challenging part of our project and eventually our visits were almost daily, in particular during the foundation/plinth laying stages. 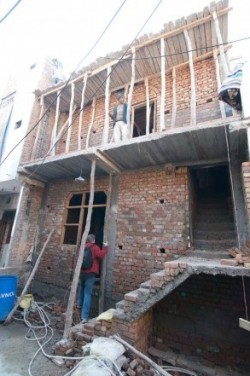 The mason is the driver of the construction process

There was initial resistance on the part of households and local masons to adopt structural safety measures in self-home-construction. Masons are highly respected in these communities. They also have a large network that has developed over generations. Since the clients select their masons, our team was seen as outsiders and it was difficult and foolish to suggest that the current construction building process was not safe.

(Pictured left: The safer bricks and mortar construction for their new home).

Given the initial resistance, we had to make sure the technical solution catered to the poor families’ need to prioritize space and cost. A large part of the effort was the investment in technical R&D that would lead to the design of a house that is safer, would not require a larger investment, uses local materials (such as bricks, cement) and can be constructed by a local mason. This did not come easy, even as we consulted more than 18 engineering studios in India and Europe. Eventually, several masons were slowly co-opted into designing the solution. We also initiated community workshops to begin training and increase awareness on construction practices in these neighborhoods.

We also pushed BASIX to make the provision of TA mandatory to get a loan for construction finance. This was key, since making finance more affordable without ensuring structural safety would only encourage unsafe housing and put more lives at risks. Given the lack of acceptable building codes and outreach of municipal regulation and enforcement, it was critical the financial providers provided the incentives to make TA mandatory.

Making the provision of TA commercially attractive for local architects and engineers on one end and valued by the households on the other continues to be the most challenging part of the business proposition.

Despite the high level of awareness and information we brought to communities about safety, hygiene and good construction, word of mouth by satisfied customers was our best marketing strategy. Referrals by masons and previous customers are key. We also learned that along with advice on safety and construction, the households were interested in other technical services, such as cost estimates, layout designs, and eventually valued the monitoring and problem- solving provided by the team of professionals.

We know that the system we developed needs to leverage the economies of scale. The drivers for a viable delivery model would be to centralize the R&D efforts, standardize the technical designs and develop a monitoring plan that comes with checks and balances in place. A more informed clientele and a favorable regulatory environment would go a long way to support scaling these best practices.