Fewer Poor People are Saving: What Does That Mean for Microfinance and Mobile Money?

Editor’s note: This is the third in a four-part series from FINCA International on what the World Bank’s latest Global Findex report reveals about the state of financial inclusion and the challenges ahead as we strive for a fully inclusive world. Read the first post in the series here: Don’t Throw the Banks Out with the Bathwater: Why the 2017 Findex Shows Opportunity for Microfinance Institutions. Read the second post here: A Shifting Frontier: How Mobile Money is Reshaping the Gender Gap in Financial Inclusion.

Take a moment to picture this: Less than half of all adults on the planet have saved anything in the last year.

That’s one surprising takeaway from the 2017 Global Findex: Throughout the world, the share of people who have saved money, whether through formal or informal means, has fallen from 56 to 48 percent in the last three years. This includes bank deposits, savings clubs, jewelry and cash stuffed in drawers.

This development cuts to the heart of one of the most cherished goals of financial inclusion, which is to provide people with safe and convenient forms of saving. Luring cash out from under the mattress should help the poor manage their savings, while providing banks with a source of less-expensive, local funding for on-lending. But if fewer people are able to set aside small amounts of money even informally, what are the chances that formal savings mobilization will succeed, either for low-income clients or for the financial institutions that serve them?

Sizing Up the Issue

Our organization, FINCA International, is the founder of and majority shareholder in FINCA Impact Finance—a global network of 20 community-based microfinance institutions (MFIs) and banks. So the declining rate of savings around the world is something we deeply care about – particularly since, as shown below, the drop in savings is limited to developing countries. 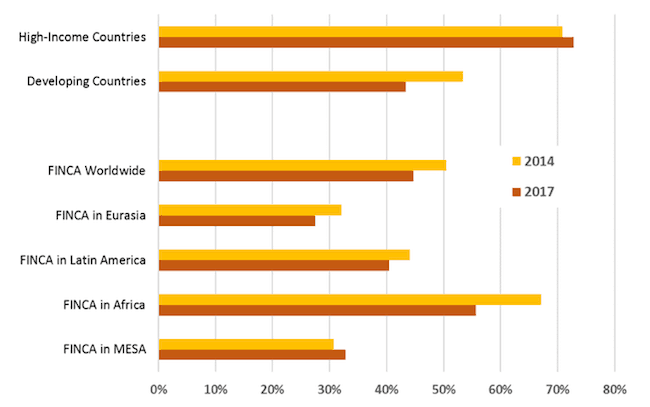 Some changes are close to the margin of error, but the overall downward trend is unmistakeable. Among the regions served by FINCA Impact Finance, the biggest relative decline since 2014 happened in Africa.

Outside of FINCA’s footprint, East Asia and the Pacific fell the most, from 71 percent to 53 percent.

Roughly speaking, savings is the result of income minus consumption. From that perspective, an economist could see the drop in savings as a positive sign that consumption opportunities are expanding. Poor countries have a higher propensity to consume than richer countries, because there are so many unmet needs. As more households have electricity, for example, they will prefer to purchase a television than to hold savings. In other instances, though, falling savings can reflect a drop in real income, especially when there isn’t a lot of fat to trim from the family budget. The explanation will lean one way or the other depending on the circumstances.

It’s worth repeating that we are not just talking about formal savings at a bank account, which is only a fraction of total savings. As seen in the chart below, the rate of formal savings is abysmally low in all regions, but it has not really changed outside the margins of error anywhere except in Africa. Instead, among all regions and categories, the biggest drop is in “any savings”— and again, Africa stands out.

What Does this Mean for Microsavings?

There could still be an opportunity for financial institutions to capture more of people’s informal savings, but it is proving difficult—perhaps more so than we expected. The last decade has seen a multitude of efforts to transform microlenders into deposit-taking institutions and to get banks to “downscale” their savings business, often by linking-up to informal savings groups. There have been some successes, including FINCA Pakistan. But unfortunately, Findex data tells us that, on a global scale, these supply-side interventions are not bearing a lot of fruit.

From the bankers’ side, the economics of small-scale savings mobilization are still hard to overcome. Agency banking can substantially lower the front-end costs, like tellers, cameras and bank vaults.  (See, for example, this study of FINCA Express agents in Tanzania.) But the back-end outlays, including the core banking infrastructure and marketing costs, are still substantial. Evaluating the results of a seven-year downscaling project funded by the Gates Foundation, the World Savings and Retail Banking Institute concluded that in the poorest markets, a viable savings program, using a combination of tellers and banking agents, requires up to 1 million active customers – a threshold that very few MFIs in these markets can likely cross.

If such massive scale is needed to make microsavings work, what are we to make of the fact that a declining number of people are actually saving in any form? For one thing, the microsavings job is getting harder, not easier—whether the drop in savings is a result of rising consumption or falling incomes.

FINCA’s mission is focused on reaching customers at the base of the pyramid, where meeting basic needs is still a struggle, and where unforeseen events can upset the fragile balance between income and expenses. In this light, another worrisome result of the 2017 Findex is that fewer people are able to mobilize resources to cope with an emergency.

Percentage of Adults Who Can Mobilize Emergency Funds 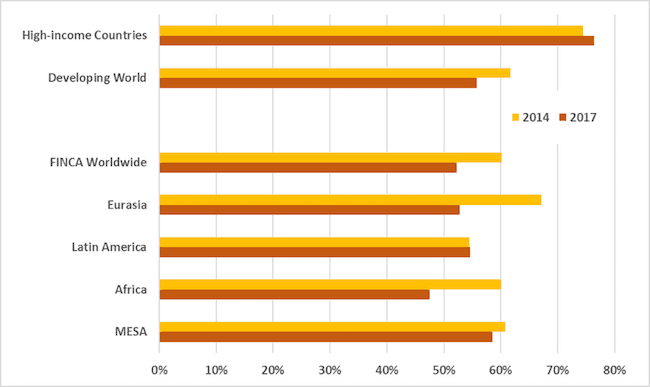 The most common strategy for handling an emergency is drawing on friends and family. While this  approach might seem less than ideal, it is flexible, enduring and vital to low-income people around the world. These informal support systems are holding strong in Latin America, where many people have access to remittances from relatives working abroad. But they are clearly coming under pressure, especially in Africa and Eurasia.

The Implications of Mobile Money for Microfinance Institutions and Savings

For microfinance institutions and banks, the case for switching from tellers to mobile money agents is as strong as ever, even though new costs, like agent recruitment and compliance, will offset some of the gains. Beyond cost, however, the strongest argument for agency banking is that it is the only viable way of bringing banking services within physical reach of most people, especially in rural areas. In Uganda, for instance, there are 200 mobile money agents for every bank branch. More than half of adults now live within 1 kilometer of a mobile money agent, versus 15 percent for banks. Nobody can doubt that this is the most effective way to reach and serve the unbanked, especially where easy access is a key driver of value.

But the Findex data should temper our expectations about the impact that this transformation will have on savings mobilization. In roughly the same period that Uganda was dramatically scaling up its mobile agents, the number of people saving money dropped by 6 percent. Every market is a function of supply and demand; when the evidence suggests that the demand for savings is decreasing, then supply-focused efforts are swimming against the current.

Mobile money will ultimately provide the infrastructure for savings, but its value for customers today revolves around sending and receiving money. Customers are using mobile services to effect personal and government transfers, to purchase airtime, and to pay utilities – not to save or borrow money. Nevertheless, as users become adept with the technology, financial intermediation—through credit and savings—can gain traction. Data from last year shows that 14 percent of adults in Uganda were using their mobile wallets to store savings—more than twice the number of people who have a savings account. Building on this trend, microfinance institutions and banks can use mobile banking to engage their customers and promote healthy financial habits, which will cultivate the demand for savings services in the future.

Scott Graham is the director of Customer Research and Field Data Services for FINCA International.