The BoP Project: Focusing on Quality, Not Quantity, in Rwanda Coffee

(Editor’s note: These photos and post are part of an occasional series of photo essays The BoP Project is making available to NextBillion readers. All images by Jonathan Kalan).

Ask most anyone about the positive impact of coffee in developing economies, and you can guess the most common response: fair trade. Consumers pay a higher price to feel good, and a low-income coffee farmer gets more money – a fair wage – for their coffee, right?

Well, it’s partially true, and in theory it’s a great idea. But as a market-based approach, fair trade doesn’t quite make sense. It prices coffee higher than the market as a tool to help farmers, but not necessarily because there is any added value. Basically, the coffee is the same quality, but everyone pays more. It doesn’t work this way in the wine industry (arguably, grapes used to make wine are the only other agricultural products in which quality and processing are as important to taste as a coffee bean), so why then does it work this way for coffee? Wouldn’t improving quality, something that increases the value of the coffee for buyers and sellers, farmers and consumers, be a better strategy for development? 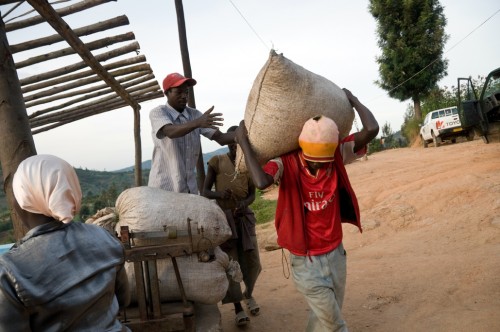 (Above: At Nyarusiza Coffee Washing Station in Southern Rwanda, workers weigh bags of freshly picked red coffee cherries at the end of each day, to than be de-pulped and processed throughout the night).

Over the past ten years, a unique program has been brewing in the Rwandan coffee industry, relying on the international demand for high-quality, specialty coffee (not always “fair trade” certified), and helping increase the income of small coffee farmers in this rapidly growing country.

Because of the sensitivity of the coffee beans (similar to grapes and wine), highly detailed attention needs to be paid to the entire process of coffee production. From good fertilizers and inputs, to the time between when the ripe coffee cherries are picked and processed in a de-pulping machine, to the painstaking task (usually done by women) of picking out the unripe or damaged parchment, there are many things that can cause coffee to taste like charcoal. Or, hopefully, like a richly caffeinated gift from the gods.

Though it’s not quite on the international map yet, Rwanda is a perfect place for specialty coffee: ideal altitudes, perfect rainfall, rich volcanic soils, and an abundant labor force. After the 1994 genocide, the coffee industry underwent privatization, allowing new coffee exporters, millers, and washing stations to open. Yet even by 2001, less than 1 percent of the coffee exported from Rwanda was classified as “specialty”, fully-washed coffee, meaning it scores above roughly 80 points according to coffee cuppers (geeky coffee gurus who loudly slurp coffee samples, spit it into bucket, and judge it based on several factors, including aroma, acidity, body, and flavor).

Fast forward to 2010. Nearly 27 percent of Rwandan coffee exported was marked as “specialty,” resulting in a considerable increase in profits per pound. This year, regular green coffee beans are being exported from Rwanda for around $5 per kilo. Specialty coffee beans are going for anywhere between $6-$8 per kilo.

The story of this jump is quite an interesting one, and after spending a few days touring coffee washing stations, cooperatives, cupping rooms, and roasters, I learned that in fact a handful of NGO’s are responsible. 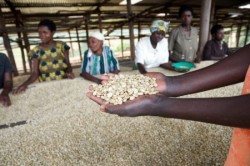 (Above: Parchment, which is what the coffee cherries become after being de-pulped, is sorted by women- most who get paid around $1.50 per day in Rwanda).

PEARL, a USAID funded project in partnership with Texas A&M University, Michigan State University and the National University of Rwanda, launched in 2000, and helped construct several new coffee washing stations (there were previously only two in the entire country and fully-washing coffee is essential to making it “specialty”). The project introduced agribusiness curricula to Rwandan universities, provided extensive training to promising young students in Rwanda in agronomy (most people with expertise in this field, as in other fields, either fled the country or were killed during the 1994 genocide), and helped local communities form coffee cooperatives.

Partnering with other organizations like TechnoServe, PEARL, which in 2005 morphed into SPREAD (Sustaining Partnership to Enhance Rural Enterprises and Agribusiness Development), was able to bring coffee farmers together, aggregate training and education, and attract international specialty buyers who cared as much about the quality of the coffee as the farmers who produce it. Most significantly, they provided a launch pad for and encouraged the growth of a local specialty coffee industry to emerge from former employees. This lead to a brand new talent pool of local coffee consultants, agronomists, cuppers, and more who have now opened their own export companies, consultancies, and washing stations.

Now, the tricky question is if, and how, these profits from specialty coffee get back to farmers. I’m not aware of any data [I asked many times] on what percentage of cooperatives pass the profits earned back to the farmers at the end of the season in what’s called a “second payment.” One official estimates that of the 224 cooperatives in now Rwanda, 50 percent are producing higher grade specialty coffee, but perhaps only 20 percent offer the second payment. Of the cooperatives which SPREAD and TechnoServe work with, nearly all offer the second payment. 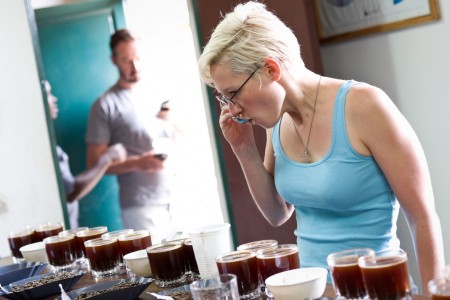 (Above: A coffee buyer from an american speciality coffee roaster “cups” freshly ground coffee from washing stations and cooperatives visited earlier in the day).

While consumers are still discovering Rwandan coffee, and specialty roasters are helping put the country on the map, attention to quality seems to be the more viable, market-based alternative to fair trade. The global skyrocketing of coffee prices also has certainly fueled an increase in profits for Rwanda’s 400,000 coffee farming families, yet regardless of the global price for coffee, farmers should have incentives to produce better output, in any industry.

We’re not talking small change here. An average Rwandan farmer with 300 coffee trees is producing about 45 kilos of beans per season, meaning a second payment could be anywhere between an additional $30-$100 per family annually, factoring in a 25 percent overhead for the cooperative.

In an agriculture dependent country with limited space (Rwanda is one of the most population dense countries in the world,) this may be the best path to fuel growth in the agricultural sector – encouraging quality and specialty, not quantity.