From ‘A-Ha’ to Impact: Making it to Market

But like many “breakthrough” innovations such as digital cameras, tablets, and Apple’s pinch-and-zoom screen function (born in 1983), social impact technologies often languish before really reaching the market. As such, some social challenges don’t necessarily require more technology; many just need capable entrepreneurs to take existing technology into action. And those entrepreneurs need money, networks, and organization building capacities in order to take an innovation like affordable eyewear to scale.

The difference between the cheap eyeglasses and VisionSpring, which has sold more than 600,000 pairs of eyeglasses to low-income customers is what separates “a-ha” from impact.

With Open Minds 2012 happening in San Francisco this week, I took the opportunity to take a step back and talk with some leading thinkers, including Phil Weilerstein and Steve Blank, about how we get there.

Weilerstein is the Executive Director of the National Collegiate Inventors and Innovators Alliance (NCIIA). In his words, his job boils down to “stimulating and supporting the next generation of entrepreneurs.” Blank is author of The Startup Owner’s Manual and Four Steps to Epiphany as well as being a serial entrepreneur. Blank now teaches entrepreneurship at Stanford, Berkeley, and Columbia. Blank and Weilerstein are frequent collaborators and share some common perspectives on how to produce innovation and get it to market.

Our discussions began with one very simple concrete premise: if you don’t know your customer and experience their lives deeply, your chance of producing a technology or process meaningful to their lives is close to zero. In Blank’s ever-succinct terminology: “A smack on the face from reality is an integral part of creating solutions.”

Both individuals spent hours laboring on the details of getting more people out into the middle of a world they spend so much time guessing about. For Blank, that’s meant building a process for starting a company grounded in iterations and rapid prototyping based on customer interactions. As he detailed in our conversation as well as in numerous publications and presentations, “startups are not small versions of a large company.” Rather, startups are temporary organizations used to search for a repeatable business model. To get to a successful model requires “searching and pivoting,” essentially testing and reiterating the model. It’s not too complex of a process. The real juicy learnings come from the “pivot;” when the customers are dismayed with your offering but have provided real insight into where to go next. But the implications are that without what Steve constantly refers to as “getting out of the building” or Customer Development, your startup will go nowhere.

This process of customer development is also where NCIIA has planted one of their swords, dedicating a large portion of their work to promoting experiential learning, specifically for engineering students. The fruits of this process are on display this week at Open Minds.

Obviously the journey to an “a-ha” moment has wild variations and many unexpected turns. Yet as Blank and Weilerstein note, the critical “ground truth” component has no substitute. The take-home message: get outside of your office/classroom if you want to solve something and produce an idea worth spreading.

In their personal work and guidance to entrepreneurs, Blank and Weilerstein emphasize an ecosystem approach. And just what exactly does this jargon mean? Learn about the whole system in which your idea will engage. Understand the elements. Figure out which levers are most important to the success of your idea and work to leverage those. And to create broader change and adoption, focus on the whole system.

Here’s an example from Weilerstein’s entrepreneurial work with NCIIA. The NCIIA focuses on promoting experiential learning at the educational level. That means not only focusing on the engineering and design chops to produce great “stuff.” To create the experiences that lead to “a-ha!” moments, NCIIA pushes changes deep within the lumbering bureaucratic behemoths that compose our university system. This is a crux of the approach to get ideas generated by students. Yet ideas can quickly die. The ecosystem requires networks and support groups for students with good ideas as well. And don’t forget, even with an inspired student and an awesome idea, some adventurous funder has to pony up the cash for the risky building of an organization to bring this stuff to market. NCIIA also has come to address this niche. All of this is done with the overarching goal of encouraging nascent entrepreneurs and helping them take big ideas to scale.

This is the dirty work of building an ecosystem. For NCIIA, the approach has paid off. To date, the organization has helped launch over 120 businesses that have collected over $300 million in private equity investment.

What it means for you 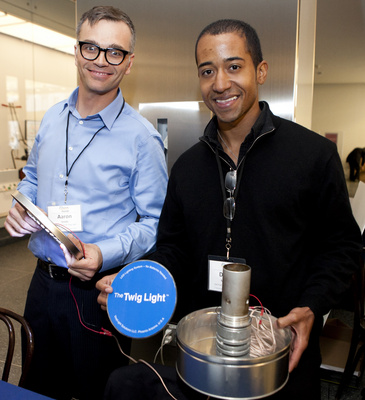 As our conversation progressed, we began to discuss how relevant these points were not just for students and entrepreneurs, but for anyone interested in tackling great solutions to big problems at scale. Here is what the NextBillion community can take away from these two leaders’ lifetime of bringing great ideas to fruition and to the masses:

1) Get out of the building. I think I might make Blank angry if I didn’t mention this. Don’t undervalue it for a second. This is where both NCIIA and Blank have focused the majority of their time: producing the interactions that shape great ideas on the ground. It’s no easy silver bullet to great innovation in your life. But nonetheless, think about how your corporate environment or office in New York might support this kind of learning. If you want to make something happen, get to the place where it’s going to take place and start trying something. Interviews with DripTech, Microvest, and Grassroots Business Fund for the BoP Career Paths series reiterate the value of this approach.

2) Start where you can make the most change, then work to influence the whole ecosystem. The factors that influence innovation are myriad. If you don’t understand your landscape and how you fit in, you’re missing the boat. It’s not just for entrepreneurs that this matters: think about your company’s efforts to engage BoP populations. How are you taking into account the whole ecosystem of your customers?

3) Making the technology work is hard. Getting it to the world is much harder. As Blank notes, “more startups fail from lack of customers than from a failure of product development.” For many of the persistent issues in international development, solutions to broad challenges in marketing, distribution, and people management are more valuable than new technological fixes. Both are important but if you’re not an engineer, we still need you to design the process-related tools that can get great services and products to people who need them. (Pictured above: Members of Arizona State team at Open Minds in 2011)

These points are basic. But coming from Blank and NCIIA with a combined 130+ enterprises launched between them, they carry some weight. If you aren’t taking these components into account, you’re probably not going to produce the best product you could for your customer.