From Darth Vader to Social Innovator: SalaUno’s formula for success

After several years of lucrative work in investment banking, Javier Okhuysen and Carlos Orellana wanted to make a bigger difference in the world. So they decided to apply what they’d learned in the world of high finance to a business of their own, one that combined their money-making acumen with a social mission: restoring people’s sight.

As Okhuysen puts it, “We put all the money that we earned working for Darth Vader in the investment banks into a social force. We like to think that we became Jedis, putting our savings into really trying to change the world.”

So far, the force is definitely with them. Since its founding in 2010, SalaUno has established itself as one of the most innovative social enterprises in Latin America. By combining lessons from companies ranging from Aravind Eye Care in India to low-cost airlines in the U.S., it achieved profitability within two months of opening. In 2012, Okhuysen and Orellana were named “Entrepreneurs of the Year” by CNN’s Expansion, a top Latin American business magazine. Their goal is to become the leading provider of low-cost specialized eye care in Latin America.

I spoke with Okhuysen about SalaUno’s unique business model, its surprising partners, and the challenges of being a social enterprise pioneer.

James Militzer: Why did you decide to run SalaUno as a business rather than a non-profit?

Javier Okhuysen: It’s much easier to scale a company than an NGO, because you can raise debt, raise equity, pay bonuses, etc. And if you want to bring in the best talent to things that can change the world, you need to be able to pay them well. I mean, people love to do good, but they also like to live well.

JM: Why did you focus on eye care?

Eye problems are the second-leading cause of disability in Mexico, and it’s a social and economic problem. Social, because the people who cannot see can’t interact with the world, they can’t work, they can’t enjoy life. And economic, because a person who has a visual disability can’t produce income for their family and for their country. A recent report from Harvard mentioned that on average, a person who has a cataract surgery can return the value of the surgery at least 12 times in a year, just from the economic value that they create. So it’s one of the surgeries that has the best return on capital, from a patient’s point of view.

Also, eye care has a very quick impact on people’s lives, and it’s something you can really see on a daily basis. It’s very difficult to sell, say, treatment for diabetes, where people can’t really see much of an improvement. And with oncology, for example, you know that no matter what you do, 30 percent of your patients will die. Whereas in cataract surgery, the success rate is very high, and it is something that people, from one day to the next, can see a 180-degree change in their life.

JM: Could you describe your business model?

JO: We use a hub and spokes model. The hubs are our surgical centers, and at the moment we just have one. Each surgical center will have the capacity to do about 12,000 surgeries a year. The spokes are centers that we built through partnerships with the government, NGOs and other companies, that allow us to have a small space where we can put an optometrist and diagnose patients. They’re not really doctors, so they can’t treat a lot of things. They just sell reading glasses, and diagnose and refer patients to a higher specialty or a surgical center if they have glaucoma, diabetic retinopathy, etc.

It’s very hard to get access to real estate, so we’ve done it through partnerships with people who understand our mission, and who have spare space in very high-density population areas, where we can see a lot of patients in a day – like inside hospitals or stores. For example, we did a partnership with an NGO whose business is the largest pawn shop in Mexico. So we’re going to open a few vision centers within their pawn shops, and part of the benefit that people get of being a client there is that they can get a free surgery, and the pawn shop will fund it. So these kind of innovative partnerships have really helped us to build our footprint, through a spoke system that has not been very costly for us, and that has channeled a lot of patients.

JM: How else do you keep prices down? 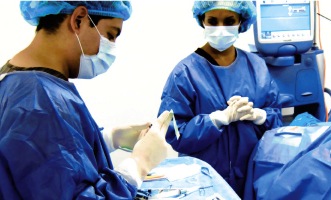 JO: We have introduced a surgery that was not done in Mexico before. It’s a surgery that was developed in the States, called small incision cataract surgery, And what this allows you to do is to avoid using very expensive consumables. So the price of our surgery is about 1/3 of the average market price, and half of the nearest competitor.

We also achieve low costs through economies of scale. It’s low cost but high quality, because the more patients doctors see and the more surgeries they do, the more proficient they become. And in our company, we have the same amount of engineers as we have doctors – so we work through different manufacturing and engineering techniques to lower costs and make efficiency and productivity higher.

JM: Do you use subsidies of some sort, or do you depend mainly on customer payments?

JO: About 40 percent of our surgeries are subsidized by a government program called Seguro Popular. We also have a subsidy from the NGO of Cinepolis, the largest cinema chain in Latin America, and they fund 100 free surgeries in our hospital per month. About 85 percent of our patients are at the very bottom of the pyramid, and these people would not be able to afford the surgery if it wasn’t for these subsidies. We also have a mix of paying patients, that help us to do cross-subsidies and cover the majority of our fixed costs, and that’s why we can offer very low subsidized prices.

JM: Do you have a sliding scale for prices, based on income?

JO: It’s much more than a sliding scale, it’s like a tiered service scale. So if you pay more, then you get to choose the date of your surgery, you get to recover in a separate room, you get some special treatment. If you pay less, then you just have to wait a little bit more. It’s still the same surgeon and the same consumables, it’s just on the service level that you change some things. And this is quite innovative as well. We took some ideas from the hotel industry, and from low-cost airlines – like where you can pay a bit more to be the first people to board the plane, or for flexibility in your tickets, etc. They have different packages, and we’ve taken this into health care, and it’s worked out quite well.

JM: SalaUno recently received $250,000 from the Inter-American Development Bank and technical support from IDB’s Opportunities for the Majority initative to strengthen capacity and start an expansion pilot – what do you plan to do with it?

JO: The grant is really helping us to reach scale. It can help us to have a bit more power in the market, to hire really good doctors, and to be able to scale without the need of many subsidies. Part of the grant is being used to open a new facility, in front of our current facility, to attend higher-income patients, and this will help us to bring in the cross-subsidies. We also developed a spoke network with vision centers in government facilities, and we have optometrists diagnosing cataracts in different government hospitals where they don’t have ophthalmic services. And we’re referring the patients to our hospitals to be operated, with the government scheme or other payment schemes to help them pay.

We also have some money to develop a teaching capacity. We’re the first hospital in Mexico that has started a subspecialty for nurses to train in ophthalmology. And some other things that we’re using the money for are marketing, really getting our model to be known in the States and universities in America, to help us increase our impact.

JM: You’ve had a lot of success getting grants and recruiting partners – what’s your secret? 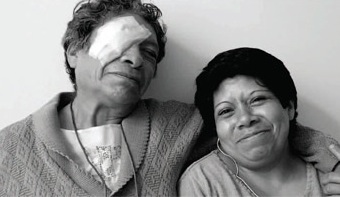 JO: One of the things that we learned in our previous careers was to be able to sell things well, and explain the story in the proper way. We firmly believe that people should get experience in things that can help them manage, scale and make profitable a social enterprise, before they actually start – things like consulting, or banking, or working for a fast-growing company. That also gives you credibility with people like the Inter-American Bank, who need to believe in the project – but also in the capacity of the management to scale and make the best use of the money.

Another thing is that we do something that is really beautiful – it’s a cause that people like to back. Depending on how appealing your mission is to other people, you will receive more or less support. We received a lot of support because the impact of those resources is something that’s very visible to everyone.

JM: So far, what have been your biggest challenges?

JO: The main challenge, I think, for a start-up is to hire and retain talent. And specifically, when you speak about health care, it’s very difficult to hire and retain doctors. These are people who have studied for many years, and they have very high expectations of their profession and income, and they’re very, very talented.

JM: Is it hard to deliver services to communities that perhaps don’t understand the nature of their eye problems, or don’t know that a solution exists?

JO: We do community outreach campaigns in all sorts of communities, and we did a recent survey that found that 68 percent of patients who were diagnosed with cataracts had no idea what a cataract was, or that they were blind because of that disease. So there’s really a big problem with information and education, and that’s something that we’re trying to tackle through partnerships as well, with radio and TV stations.

JM: Have you had trouble convincing your for-profit partners to essentially help you make money, even though there’s also a clear social benefit?

JO: Yeah, it’s a challenge, because people don’t really get the concept of social enterprise yet. But they’re starting to. And they’re starting to see that if they back a company that has strong management and good capabilities, this company could probably scale much quicker to change people’s lives.

We have been slammed by a few partners who say, “Look, you’re here to make money, I’m not going to support you.” But some other people just think about it and say, “I’d rather support you, because you’re going to make the best use of my money and time, rather than supporting an NGO that is under-managed, or has a lot of waste in the middle.”

JM: What are your plans for the short and long term – will you continue to focus exclusively on eye care?

JO: I think that if we’re able to scale the company as we hope to, there might be the possibility that Carlos and I set up a management for the eye care part of the company, and we start working on another sub-specialty. But really, we think that we’ve found a good business model, a good social model, and we don’t want to move away from eye care in the next few years. Because a big part of entrepreneurial failure is lack of focus, so we want to be very, very focused on what we do.

In the short term, we plan to build a few centers next year – spokes – and we also have plans for a couple of surgical centers. And hopefully things will continue to stay strong, and we’ll continue to grow.