From the Slums in Delhi to the Villages in Takeo: How Operation ASHA Scaled Up Across the Borders

Imagine a village of 1,000 people who don’t have the access to private clinic or a proper pharmacy. The nearest primary government health center is located 5-10 km away. Take 20 such adjacent villages that fall under the catchment area of the same health center with a combined population of 20,000. Assume one district would have 15 such aggregated areas with a total population of 300,000. Add the unpaved roads (>90 percent), non-existent public transport, low population density, daily per capita income of less than $1, lack of dedicated and skilled healthcare workforce plus low healthcare resources within the public sector – and this gives us a mass public health problem yet to be solved in most parts of the world; or at least in country like Cambodia where 80 percent of population is rural. For the infectious disease of tuberculosis (TB), this scenario presents many challenges to comprehensive diagnosis and effective provision of treatment.

Cambodia, a country of 14 million-plus people in South East Asia, went through a period of instability caused by war and genocide in 1970s, which continued till late 1980s. This instability dismantled much of the country’s health system. Hospitals were destroyed and the skilled healthcare workforce was wiped out or fled the country. Per capita government expenditure on health in 2009 in Cambodia was $28 (vs. $3,426 in US, 0.8 percent). Source: World Health Statistics 2011 – page 135. Treatment of tuberculosis in the public sector of such a country is definitely not an easy task considering it typically takes six months of daily treatment (DOTS).

(Left: A counselor speaks with a woman about TB treatment).

In December 2010, Operation ASHA (OpASHA) opened its first DOTS center in the capital city of Phnom Penh. After encouraging results in India, Cambodia was the first foreign country to test the model of providing DOTS to tuberculosis patients in urban slums and rural communities. The organization arrived in Cambodia with the aim to replicate its model used in India, but it struggled to replicate the success.

The DOTS model employed in high density urban slums of India involves setting up stationary centers within poor dwellings that are visited by the patients to receive their TB medications, per the plan of WHO-approved DOTS. The centers are strategically placed in accessible and centrally located areas surrounded by large populations. This set up, when applied in the Cambodian context, failed to reach enough patients as fewer patients lived in relative proximity to the centers. After the initial six months, OpASHA changed their approach and employed mobile counselors on motorbike. 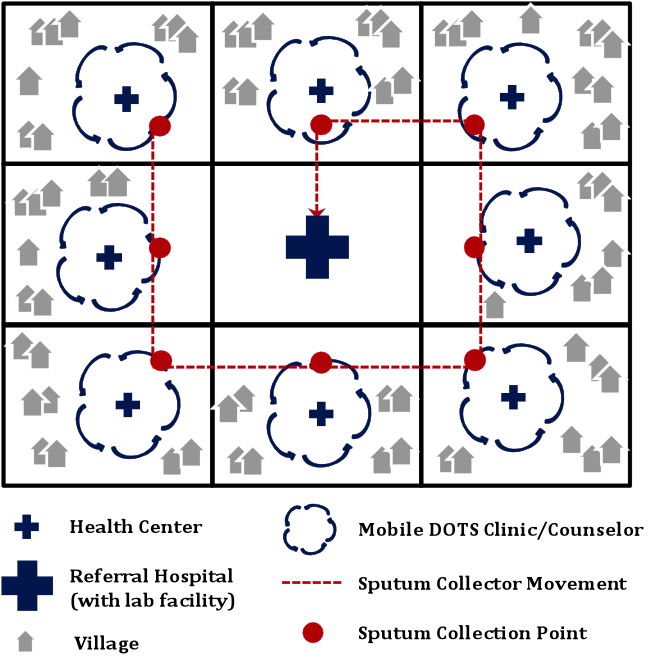 (Above a diagram of the Mobile DOTS Model).

The mobile DOTS model is designed to have counselors traveling from village to village on motorbikes, carrying anti-TB drugs & other supplies related to TB. The counselor dispenses medicines to patients at their homes, as per DOTS guidelines and spends substantial time each day identifying active TB cases within communities. Due to fewer resources for medical technology in Cambodia, smear microscopy tests for TB diagnosis can only be performed in the lab at referral hospitals (one in each district). Every day, the counselor also collects sputum samples from the suspects and carries it to a pre-assigned location, where another staff ‘Sputum Collector’, again on a motorbike, is waiting to take sputum samples to the government lab for diagnosis. (At right: A sputum collector)

The result is an effective, closely-knit and dedicated network of mobile healthcare workers bringing treatment to the doorsteps of people who otherwise don’t have ‘practical’ access to medical care.

Today, OpASHA has enrolled nearly 1,500 patients in 1,276 villages, covering a one million-plus population in four districts. More than 90 percent of these patients were enrolled after the mobile operations begin one year back. Moreover, 44 percent of tuberculosis patients being treated under public health sector of districts, where OpASHA works, have been enrolled through the organization.

This is not only the testament of the success of the model, but also an opportunity to study it further and change the way public health is delivered in the resource-constrained developing countries.