Since the Sustainable Development Goals (SDGs) were adopted in 2015, the pledge to achieve these goals has spurred aid and investment around the world. This is especially true in healthcare, which has seen a near-universal increase in national health spending, as well as a five-fold increase in Development Assistance for Health (DAH) compared to spending in 1990. While DAH has historically been the primary method used to support health spending in low- and middle-income countries (LMICs), there has been an increased interest in impact investing as a way to accelerate innovation and improvements in healthcare delivery.

Global health impact investing was a relatively nascent field until the early 2000s, when the Bill and Melinda Gates Foundation and the Global Health Investment Fund began devoting significant capital to the development of technologies targeting major issues in global health. These impact investments, alongside global health programs and public-private partnerships, have demonstrated overwhelming success by significantly reducing rates of global extreme poverty, child mortality, HIV, TB and malaria. However, these successes do not show us the true difference impact investments can make in the development of novel markets and industries within LMICs. By encouraging and strategically targeting these investments, investors, policymakers and companies can support the development of innovative products and opportunities, while supporting improvements in health globally.

Nearly 300,000 women and 2.5 million infant annual deaths are attributable to complications during pregnancy and/or childbirth, and nearly all occurred in low- and middle-income countries. Women in these countries often lack access to high quality antenatal care, emergency obstetrics care, skilled birth attendants and rights-based family planning, all of which are evidence-based services that reduce maternal and neonatal deaths. To address the high rates of maternal and neonatal mortality, the Saving Lives at Birth (SL@B) Grand Challenge for Development was launched in 2011 by several stakeholders including the Gates Foundation, US Agency for International Development (USAID), UK Department for International Development, Korean International Cooperation Agency, Norwegian Agency for Development Cooperation and Grand Challenges Canada. The SL@B program invested nearly $80 million dollars over the last decade to fund over 110 innovations addressing critical issues in maternal and neonatal health (MNH). As compared to other global health funding platforms that tend to fund more established interventions or innovations, SL@B remains unique in funding MNH innovations because the program was open to innovations at any stage of development, from concept to full-fledged enterprise, and any size of organization, from a small university startup to a large NGO.

Maternal and Neonatal Health Investments in Kenya and India

Of the countries that SL@B focuses on, India and Kenya have some of the highest absolute numbers of maternal and neonatal deaths in the world, and are also among the fastest-growing hubs of innovation in their respective regions. Our review presented here examines private and public investment targeting the maternal and neonatal health sector in the two countries, as they have the highest number of SL@B-funded innovations. Using data from Pitchbook, the research team identified the top 10 MNH investors, based on their number of unique investments through several time periods from 1990 until 2011, which was the year that SL@B was launched. For this analysis, investors consisted of venture capital, private equity and public sector players who invested in organizations focusing on MNH. The team compared these investment organizations with the top 10 investors from 2011 to 2019 with the same MNH focus. They then compared these investment numbers to the MNH funding within the United States, a representative high-income country, for the same time periods.

The analysis shows that the investment landscape for MNH in Kenya and India has dramatically changed since the launch of SL@B in early 2011, indicating increased attention on MNH issues and increased willingness to invest in these markets. Of note, while Kenya and India are among the top target countries for SL@B-funded solutions to MNH challenges, both are middle-income countries. Lower-income countries may not necessarily experience these burgeoning investment opportunities as readily until further development and infrastructure become available, as seen in India and Kenya in the last quarter of the 20th century. 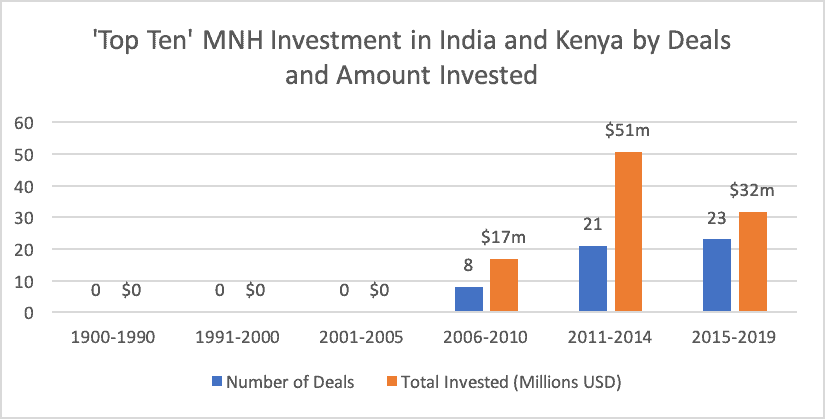 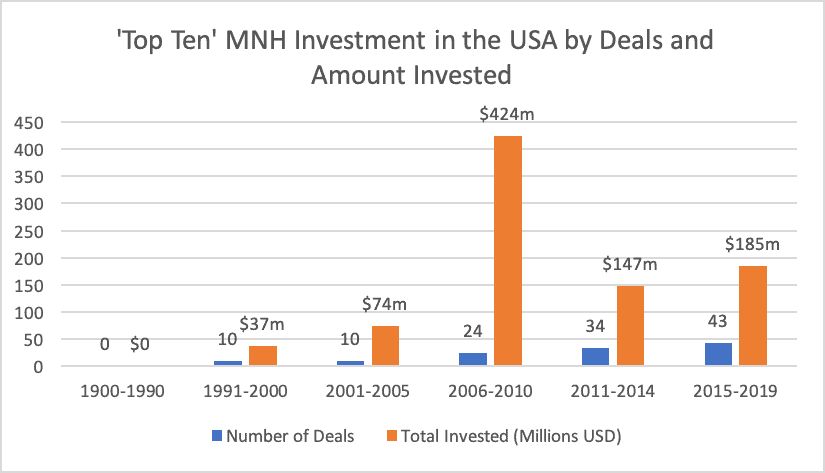 According to Pitchbook data, prior to 2011 there were only seven investors that made any deals in MNH enterprises within India or Kenya. This has increased by nearly tenfold, with over 70 investors that have made active deals as of 2019. From 2006-2010, the first time period in which any investment was made in MNH enterprises within India or Kenya, the top 10 investors were all privately held venture capital firms or merchant banks that collectively invested US $17 million in four distinct MNH-related companies, which were mainly hospitals, maternity services or genomic-related companies. After SL@B’s debut, in early 2011 through 2014 and from 2015 to the end of 2019, the top 10 list of investors included nonprofit venture capital funds, governments and accelerators/incubators that collectively invested more than $82 million in 22 MNH enterprises. These funded enterprises included social impact organizations, innovators based in LMICs and a greater inclusion of seed/early-stage innovations. The investors themselves in 2019, compared to pre-2011, were not limited to higher-income countries but also represented domestic investment firms that are based in India and Kenya.

Of note, the total amount invested from 2015 to 2019 in Kenya and India is lower than that invested from 2011 to 2014. Closer investigation reveals that the top 10 investors in the more recent time period included a greater percentage of accelerators and incubators, and higher angel, pre-seed and seed funding for early-stage companies. The investment size in this form of funding is often much smaller compared to later-stage funding rounds, which helps explain the difference in total amounts invested. Although private and public MNH investment in the United States is nearly 400% that of Kenya and India (as of 2019), this sector is still growing rapidly in both high-income countries and LMICs, and will likely continue to do so as more projects begin to mature and seek additional funding. These investments, along with a growing ecosystem supporting innovation in India and Kenya, have led to a significant increase in the number of maternal and newborn services and innovations.

An Opportunity for Future Healthcare Innovations

This explosion in both the diversity of the types of MNH-focused enterprises operating in India and Kenya, and the funding available for them, cannot be fully attributed to the SL@B Grand Challenge. But there is some evidence to support the belief that the introduction of philanthropic funding programs like SL@B can have ripple effects in related markets and industries. Prior to 2011, international support for scaled innovations as a whole, especially those from LMICs, was scarce – likely due to a lack of internal infrastructure and funding opportunities to grow innovations within these markets. As a Global Grand Challenge focused on MNH, SL@B brought attention to the ways supporting innovations can lead to improved health outcomes and infrastructure in lower-resource countries.

Since the expansion of programs with models similar to SL@B, India and Kenya have become regional hubs of innovations, drawing entrepreneurs from around the world to develop their ideas into viable businesses. For global investors and market analysts, this discussion of SL@B’s ripple effects highlights an important trend to monitor. As funding for global health and globally sourced innovations grows, countries such as India and Kenya present an opportunity for investors to shape markets in ways that help both innovators and shareholders build greater partnerships and launch more successful enterprises.

This work was funded by a grant from the Saving Lives At Birth Program from the United States Agency for International Development (USAID).