Gloria and 6-year-old son, John Lloyd, were sitting in a bustling health clinic in Gerona, a town of 80,000 a three-hour drive north of Manila. “Little John” – named for a TV star – to everyone’s amusement-was home from school with a stomach ache and they arrived here early, prepared to wait all day to see the doctor. As in many small clinics in developing countries, a wait for three or four hours was fairly routine.

But as soon as we had finished introductions, on this Monday, the busiest day of the week, Gloria was called to register John’s complaints with a nurse tapping quickly into a black laptop. Another 10 minutes and they were sitting in front of the pediatrician, in her air-cooled office as she scanned John’s wirelessly-transmitted health record. Gloria and other patients here remark continually on the new speed of service, a happy consequence of the Wireless Access for Health electronic record-keeping system. The system is installed here and other clinics in the region, was built in a series of enhancements to the open-source platform CHITS with funds and technical assistance from Qualcomm Wireless Reach, USAID and RTI.

(Above, a visit to Wireless Access for Health in Tarlac, Philippines. Video courtesy of the Center for Health Market Innovations.

While the wireless record-keeping system was launched with invaluable support from progressive local leaders including the 3G purveyor Smart Communications, the stamp of the Philippine government was apparent to us as we traveled through the country to learn about market-based health programs for the Center for Health Market Innovations. In IT development, national health insurance, and supportive policies for a low-priced generics drug market, the state’s stewardship of the health marketplace is visibly improving the quality of care for Filipinos. This is a reoccurring theme among many programs identified by CHMI’s Manila hub at the Philippine Institute of Development Studies. 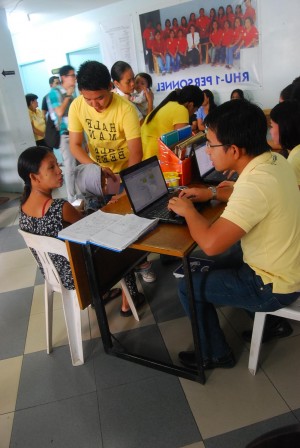 (Left: A pregnant mom and child registering with the nurse, a process which took a matter of minutes (5 or less) rather than hours before the Tarlac Wireless Access for Health program was initiated. She told us that in the old system, you arrived at 7 or 8 a.m. and your name was called for a consultation around lunch time or after lunch. Now, she said, they had just arrived and they are already up next. Image credit: Ida Marie Pantig/PIDS):

As in certain industrialized countries (ahem), out-of-pocket spending by consumers on health care is often a big problem in the developing world. The national health insurance program, PhilHealth, is constantly innovating with new ways to improve insurance coverage, striving toward a goal of national coverage by 2013. Currently, at least 60 million Filipinos are enrolled in insurance, around 60 percent of the population. Insurance plans through PhilHealth are now available to truck drivers, market vendors and others working in the informal sector through the KaSAPI program. To improve customer satisfaction and cost-effectiveness, PhilHealth recently launched a scheme in which these individual members can pay their premiums by text message. Still, 54 percent of health spending is made by consumers, out of pocket, but the movement toward universal health coverage is apparent.

For the majority of people participating in PhilHealth insurance, payments make up a significant proportion of revenue for accredited health facilities. For instance, La Union Medical Hospital, an incorporated hospital with many private patients, still gets the majority of its revenue from PhilHealth. Thus PhilHealth’s progressive Benchbook accreditation standards are hard to ignore. As with Medicare and private insurance in the United States, facilities that aren’t accredited give up a huge source of revenue, an untenable situation for most. 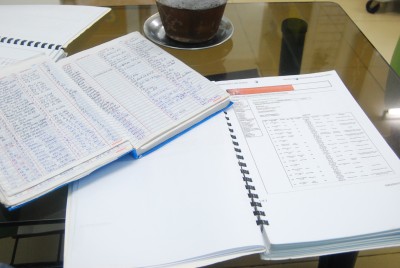 Indeed, the health clinic where Gloria and John Lloyd were treated advertises by its front door that it is PhilHealth-accredited. Private sector facilities, too, race to get up to code so patients can use their PhilHealth cards. Dr. Fernando Astom, La Union’s director, told us that the Benchbook has improved and standardized the quality of care in hospitals-and been a boon to advertising, since they can market a top-tier “Center of Excellence” rating to generate more business.

Gloria’s hometown, Gerona, is relatively prosperous by Philippine standards thanks to its proximity to the provincial capital, Tarlac, where locals point proudly to the new mall and Jollibee fast food chain as signs of their spending power. Yet 50 percent remain under the poverty line. Many residents farm the rice fields, mango groves and sugarcane fields we passed on the road.

The poor- actually, everyone – apparently have rallied to purchase their prescriptions at the Generics Pharmacy, tiny franchised storefronts emblazoned with a mortar and pestle logo, nearly as ubiquitous as the red Jollibee signs in many regions. Although many essential drugs must, since 2009, be sold at affordable prices by law, operational efficiencies allow generic drugs at the franchise network’s privately-operated 1,154 outlets to be sold at deep discounts.

According to members of an expert panel reviewing Health Market Innovations in the Philippines, at a recent summit organized by the Philippine Institute for Development Studies, the Generics Pharmacy’s model changed the whole pharmaceutical market when it adopted the franchise model to expand access to inexpensive medication. Another benefit of this model is that it provides entrepreneurial opportunities to the middle class, since the scheme enables the establishment of profitable rural pharmacies with low capital investments. Also addressing the cost of medication in the country, which was historically disproportionately high, Botika ng Bayan chains have practiced parallel importation of patented medications. 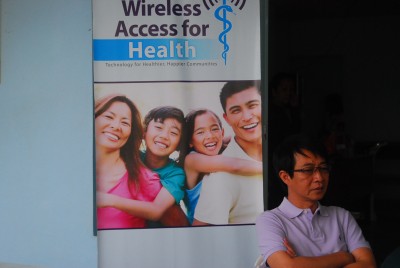 (Above: Mayor Dennis Go of Gerona, in Tarlac, speaking thoughtfully about the benefits of electronic medical records. He says he supports Wireless Access for Health because health information should move freely, openly and on time especially to decision makers at the provincial level (Tarlac) and at the national level to Manila. He is excited about the expansion to the barangay (village) level).

In Gerona, the developers running the Tarlac Wireless Access for Health pilot excitedly note that barangay (village) health workers will be the next to digitally sync their work, instantly reporting the health status of women and children in barangay where they work, using tablet computers and smartphones running on the Android operating system over Smart’s 3G network.

As with the health clinics, the data feeds will give instantaneous feedback to the health center and provincial head about the community’s health status, which speeds up the quality of care and helps check public health problems practically before they start.

The Philippines is proving to be a model for many developing countries working to improve quality and reduce health spending for the poor. For program managers, researchers, investors, donors and progressive policy makers: Watch this space.