As it has in the rest of the world, the COVID-19 pandemic has led to a significant rise in government fiscal spending in India. As of May 2021, the value of these stimulus packages was 8.6% of India’s GDP. But even this additional spending will not be enough for India to meet the United Nations’ Sustainable Development Goals (SDGs) by 2030. A 2019 Brookings India report indicates that India faces an annual financing gap of US $565 billion in achieving its SDG targets. Standard Chartered, in its Opportunity2030 report, estimated a potential investment opportunity of US $1.12 trillion for the private sector to help achieve just three of the 17 SDGs.

But while impact investment in India has been growing over the last few years, it is still nowhere near those levels, and the country’s social enterprises face substantial financing gaps of their own. According to a survey of Indian social enterprises by Brookings India, 57% identified access to debt and equity as a barrier to their growth and sustainability. As in most countries, it is difficult for the Indian government to address this financing gap. This increases the need for private investors to get involved and reduce the burden on the government to achieve the SDGs.

One way for the country to address this need is by setting up a social stock exchange (SSE). Below, we’ll discuss India’s ongoing efforts to establish an SSE, explore how it can benefit both social enterprises and impact investors – and highlight some key considerations the government should take into account to maximize its success.

The Advent of the Social Stock Exchange in India

The movement toward establishing an SSE began in July 2019, when India’s Finance Minister proposed it as a way to raise capital, through debt, equity or mutual funds, for enterprises working to advance social welfare. She suggested establishing the SSE under the authority of the Securities and Exchange Board of India – the regulatory body for the country’s securities and commodity market. Subsequently, a working group was operationalized, which released a report in June 2020 that outlined a holistic approach for setting up the SSE. On September 28 of this year, the board approved the creation of the SSE. The regulator is now coordinating with the government to set up the exchange, which will ultimately be privately run – though the timeline for launch remains unspecified.

Once established, the SSE will act as a trading platform to raise capital for social enterprises transparently and efficiently, making various fundraising instruments available under the regulatory guidelines for these enterprises. Eligible social enterprises can include both non-profit organizations and for-profit businesses with social intent and impact as their primary goals. They must be engaged in one of the 15 broad social activities approved by the Securities and Exchange Board of India.

The Social Stock Exchange will provide these enterprises with improved market access and visibility among investors using the SSE platform, giving them the opportunity to raise capital through impact investing, philanthropy, corporate social responsibility and government funding. The SSE will also establish minimum reporting standards and metrics for social impact assessment for all enterprises listed on the exchange, which are likely to improve market discipline and encourage healthy competition among social enterprises to achieve impact goals.

The SSE will also safeguard the interests of investors. It will reduce an information asymmetry that has held back the current impact investing market, by making investors aware of financially attractive and impactful social enterprises. The working group committee report also suggested that the SSE should offer tax exemptions and other benefits for investors, which hopefully will lead to greater investor participation.

Many details about the ultimate structure and management of the SSE remain undetermined, but it will likely be housed within one of India’s existing, high-turnover stock exchanges, such as the Bombay Stock Exchange or National Stock Exchange, in accordance with the working group’s recommendation. This will help the SSE leverage the existing infrastructure and client relationships of the exchange to onboard investors, donors and social enterprises. The report does not explicitly mention the source of the funding required to set up and manage the exchange. However, it can be assumed that the SSE will attempt to make money in the same way as other global stock exchanges, like the New York Stock Exchange in the U.S. or the National Stock Exchange in India – i.e., by charging fees to participants. The working group recommended setting up a US $13.4 million capacity-building fund for raising awareness of the SSE, promoting the adoption of this new stock exchange among social enterprises, philanthropists and donors – as well as enhancing the reporting capabilities of small enterprises to prepare them to engage successfully with investors on the exchange. The Securities and Exchange Board of India has already given indications that it will engage with other stock exchanges, and with regulators like NABARD and SIDBI, to create this fund.

The graphic below explains how the SSE will work. 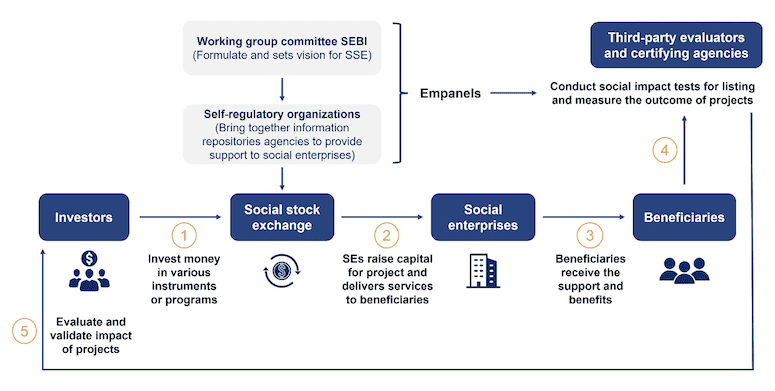 Learning from Social Stock Exchange Models in Other Countries

India has a huge advantage in setting up its exchange: It can learn from SSEs set up in various other countries over the years, including the U.K., U.S., Canada, Singapore, Brazil and South Africa.

While these countries’ SSEs are similar to India’s emerging platform in their fundamental motives and objectives, each of these models is distinctive and suited to the needs of the country’s development sector. The graphic below provides a snapshot of the key features of some of these models. 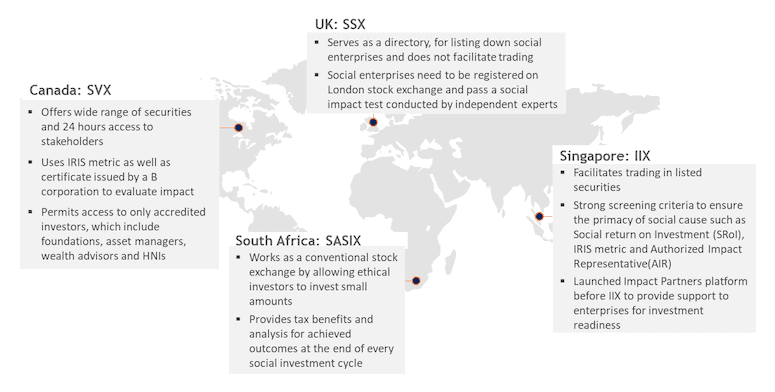 Though many of the SSE models launched in other countries have successfully raised capital for social enterprises, some have failed too. For instance, Impact Us was established in the U.S. with financial support from the Ford Foundation, the Kellogg Foundation, the MacArthur Foundation and the Open Road Alliance, and was supposed to be a game-changer in the global impact investment industry. The fact that it closed just a year after launching raised questions about this model, which have been echoed by similar closures of platforms like Mission Markets and Enable Impact. So, what went wrong with these efforts – and how can India’s SSE avoid their fate?

Think of it as a “chicken and egg” problem: SSE platforms need both investors and social enterprises for the arrangement to work. But a newly launched SSE platform may not create enough value to entice enterprises to sign up when there are no (or few) investors involved – and vice-versa. This highlights the need to build significant confidence among stakeholders on both sides, to persuade them of the eventual benefits, and to onboard them onto the SSE platform.

Building on the learnings from both successful and unsuccessful global SSEs – while also acknowledging the Indian context – here are some key considerations for setting up an effective SSE in India.

While the momentum behind the creation of an SSE represents a promising step towards building India’s impact investing ecosystem, it is just the beginning. The government must create an enabling regulatory environment for the SSE to accomplish the desired results. It should ensure minimal barriers for the on-boarding, reporting and overall functioning of social enterprises. There should be sufficient tax incentives for investors, and mechanisms to ensure a seamless flow of funds to social enterprises. Ultimately, if it is designed well, India’s SSE should be able to streamline public and private sources of capital for effective use by social enterprises – without reducing the benefits they deliver to customers at the bottom of the pyramid.

Manali Jain is working with MSC as an international development consultant in India, and Mohit Saini is an impact investing professional working with the Tufts University Investment Office in Boston.