India’s No. 1 problem is No. 2.: Tansa Clean tests ‘biodigester’ technology to improve sanitation

In an October 2013 article in India’s Outlook magazine, Uttam Sengupta wrote rather succinctly, “India’s no. 1 problem is no. 2.” This isn’t hyperbole. Run through the sanitation statistics in India and the scope of the problem comes sharply into focus. Nearly 800 million Indians with no access to toilets defecate in the open; 400,000 children under the age of 5 die each year from diarrhea-related causes (India Centre for Community Health Research, 2003).

Some $54 billion is lost from the Indian economy from health costs, lowered productivity, and absent tourism revenues, all of which originates in diarrhea.

This is not breaking news though. There is an army of organizations in India working to make sanitation accessible to every Indian. Sulabh International Academy of Environmental Sanitation and Public Health, Environmental Sanitation Institute, The Tata Foundation, Samagra Sanitation, Shramik Sanitation Systems, The Humanure Power Project, and the Bill and Melinda Gates Foundation are just a few working on long-term solutions. Each has a unique and innovative approach – from building sewer-connected in-home toilets, to entrepreneurs who operate mobile toilets, to incentivizing pay-for-use toilets. Their collective focus is to make toilet accessibility a reality for those many millions of Indians who currently do without.

This is vital and essential. Unfortunately, this isn’t the full picture. If you think of the toilet as the “user-interface,” then treating the material generated is the “backend” – so to speak. And it is here that gaps are equally evident. Currently, on average, only 31 percent of all wastewater in India sent to urban sewage treatment plants is processed, according to UNICEF/WHO. The remaining 69 percent is treated minimally or not at all and released into receiving waters. These treatment plants, therefore, clearly do not have the capacity to treat the additional waste that is generated by homes that, unconnected to the sewer system, empty to individual septic tanks.

These homes are increasingly using the services of vacuum tanker trucks that suction the waste out of tanks. But in the absence of adequate processing capacity and the disposal fee charged for drop off, these enterprising truck operators often make for the closest and most convenient stream, river, or storm drain.

This is, of course, a problem – waste from septic tanks (i.e. “septage”) now joins the stream of fecal pollution already entering India’s freshwater systems. But because this waste is on wheels, two entrepreneurs – Anisha Shankar from Seattle, Wash., and Mario Varon from Barranquilla, Colombia – see this as an opportunity. They want to divert these trucks from the nearest river to the nearest anaerobic biodigester.

Anaerobic biodigesters are airtight tanks that create just the right environment for bacteria to become active, breaking organic wastes down into methane-rich biogas and a nutrient-rich slurry. Shankar and Varon believe that biodigesters are a critical player in India’s and, indeed, the developing world’s sanitation woes. They’ve founded Tansa Clean, a company whose mission is to transform sanitation. (Full disclosure: Tansa Clean is one of the “fledglings” in the Fledgling Accelerator that I manage.) Says Shankar, “We want to change the perception that human waste needs to be treated and disposed into the reality that it is a saleable source of energy and nutrients.”

They’ve teamed with a biodigesters operator outside of Kolhapur city in Maharashtra state in India to test their model. They’ll partner with truck operators to make septage delivery to the digester, measure inputs and outputs, test for pathogen die-off, and determine pricing. They’ll tweak their assumptions and their model along the way, and at the end of their testing, they’ll be looking for additional biodigesters customers. Check out the infographic below (designed by KILLER Infographics) for an illustration of how Tansa approaches the market-based solution to sanitation.

Shankar and Varon are currently crowdfunding for their pilot. Their campaign on Indiegogo, which has raised over $12,000 of their $20,000 goal, ends on Nov. 14.

Michael “Luni” Libes is the founder and managing director of the accelerator Fledge, based in Seattle, where the Tansa Clean business plan was incubated in spring 2013. 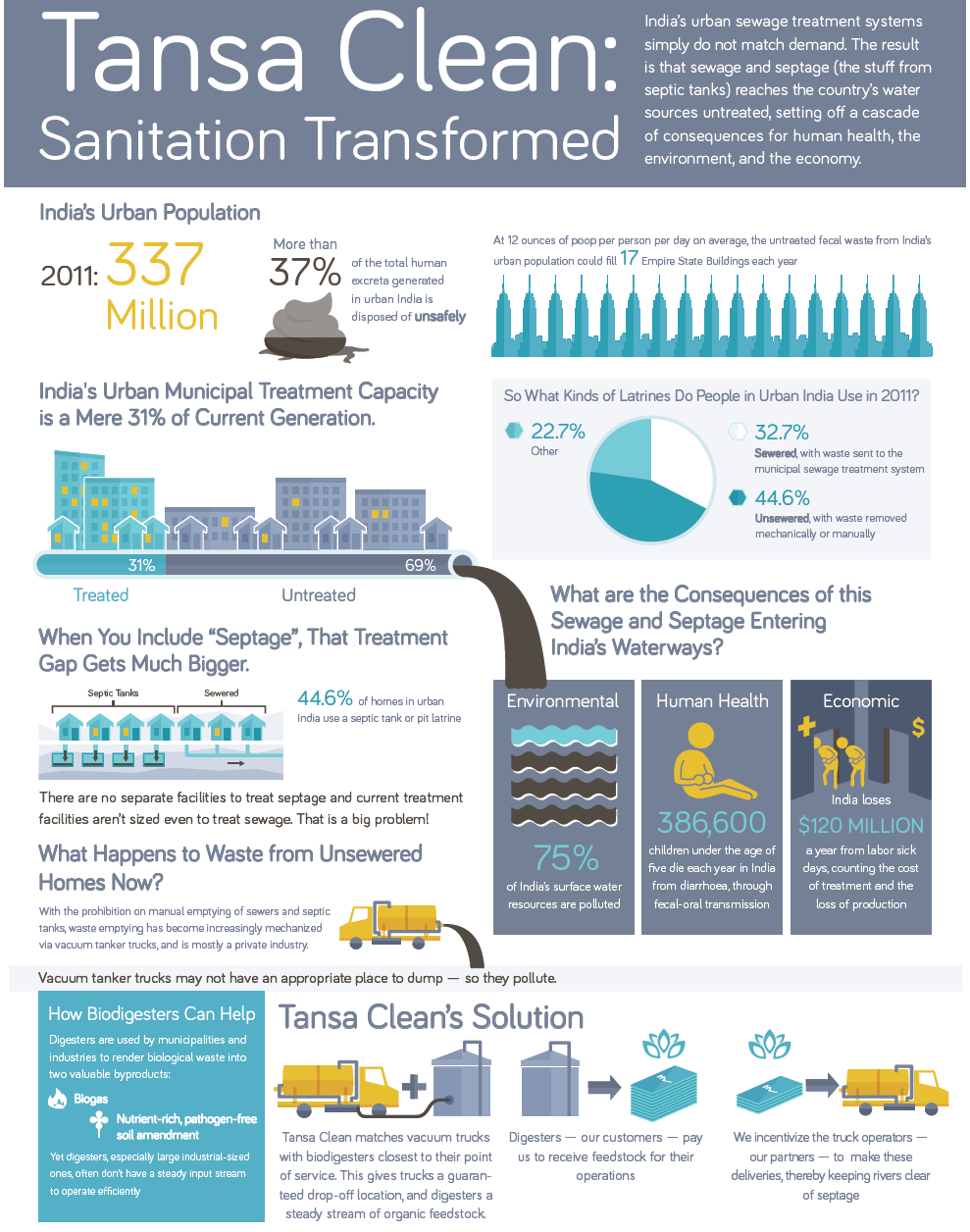