A lot of toolboxes, guidebooks, and protocols have been written about how BoP business models should look and how to best implement them. But as two scholars who have led many of those efforts recently summarized: “corporate interest … has dropped precipitously or migrated to the CSR (i.e., philanthropic) side of the business.” The new oikos UNDP Young Scholars Development Academy, set for September 2-6 in Istanbul, seeks to uncover some of the underlying dynamics with which managers overcome these challenges.

While the ‘BoP proposition’ sounded convincing and may ‘too good to be true’, the debate on how to best realise BoP business models is still wide open – on at least two fronts.

The first question concerns the overall organisational setup. Should BoP business be implemented by large and resourceful multinationals – an extreme position that many advocated when the concept was still in its early days. Or, should it best be left to careful NGOs and cooperatives with deep roots in the target markets? Should profit motives dominate, or social ones?

There are good arguments for both sides; business understands the business side of BoP, but often need to adapt their business models significantly. Meanwhile, NGOs understand poor communities – but are inexperienced in business issues. This is also an issue of attitudes: Managers might belittle BoP business models and be sceptical of poverty markets, while NGO leaders might resent private sector thinking and practices. (Although these barriers are coming down).

The second question concerns how the BoP exploration shall be organised with these existing institutional contexts. As it is a new and challenging proposition, the early BoP literature has advocated separation, such as multinationals launching operations in new country where no existing corporate subsidiary could stifle the innovation (as suggested by London and Hart). This is mirrored by existing experiences of companies that have found lacking commitment to BoP in core departments a challenge, and later moved projects to more remote and marginal places in the organisation, a phenomenon observed by Olsen and Boxenbaum.

Similar issues can occur in NGOs. Organisations whose dominant logic is fundraising and the provision of goods and services for free or a nominal fee can find it difficult to ‘switch’, in particular if the beneficiaries have formed their expectations around ‘free’, as was observed by Kistruck and Beamish. While the existing networks in poor communities can be important assets in starting BoP businesses, the existing loyalties also can be a hindrance.

The open discussion and divergent experiences show that the solution probably lies on a different, more micro level, i.e. how do BoP managers understand their ‘profession’ and their position in the company? How do they balance the different expectations towards their work, both in private companies and NGOs, which may be irreconcilable on the surface? How do managers operate in hybrid settings manage these issues? 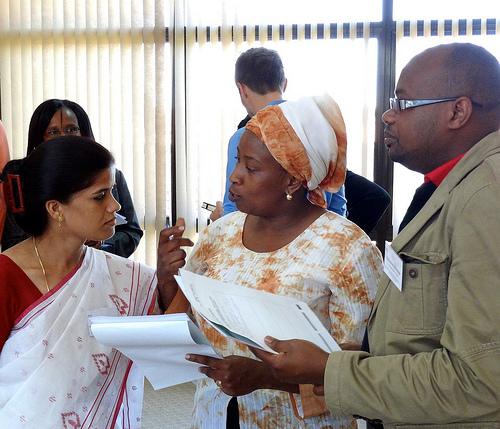 These questions are amongst those that PhD students and young scholars will focus on during the one-week oikos UNDP Young Scholars Development Academy 2013, which this year focuses on “organising and governing inclusive business.”

For the fifth time now, oikos and UNDP join forces to invite PhD students and young scholars to a one-week intense discussion on their research projects. After Switzerland, Costa Rica, India and Kenya, the academy this year will be headed to Istanbul, the seat of UNDP’s new Istanbul International Center for Private Sector in Development (IICPSD).

The abstract submission deadline is June 24. To keep discussions productive, the academy is limited to 15 participant. The participation fee of 400 CHF (about USD $415) covers local accommodation, food, and transport for all activities during the academy.

More information on the academy can be found on the oikos website.

Quotes on the opening section are from Simanis, Erik , and Mark Milstein. 2012. “Back to Business Fundamentals: Making “Bottom of the Pyramid” Relevant to Core Business”. Field Actions Science Reports 4:82-8.

Tags
Base of the Pyramid, education, events and competitions