Investment = Inclusion: Can Fintech, With a Boost from Investors, Level the Playing Field for the Unbanked in Africa?

Editor’s note: Throughout 2017, NextBillion is organizing content around a monthly theme, dedicating special attention to a specific sector alongside our broader coverage. This post is part of our focus on digital finance for the month of December.

Financial technology (or fintech) is transforming the financial services market for legacy institutions in an unprecedented way. In a nutshell, fintech describes the evolving intersection of financial services and technology by startups, tech companies or even the legacy financial institutions themselves. Fintechs operate in a number of sectors ranging from lending to personal finance, digital mobile payments, and virtual currencies. These sectors are poised to have a particular impact on the unbanked in Africa by leapfrogging traditional financial services and delivery constraints in favor of cheaper and more efficient alternatives.

At the root of this trend is the astonishing growth of mobile access. Sub-Saharan Africa is projected to have 535 million cell phone subscribers by 2020, according to the GSMA. Just over half of the 282 mobile money services operating worldwide are located in sub-Saharan Africa. In 2016, there were already 277 million registered mobile money accounts across the region, about as much as the rest of the world put together. Though just 100 million of those accounts are active, that number still far exceeds customer adoption in South Asia (the second biggest region for mobile money) in terms of market share, which has 40 million active accounts. And there are no signs of this momentum slowing down. In most cases, where the unbanked or underbanked in Africa do not have access to formal or semi-formal banking opportunities, their phone is their wallet. 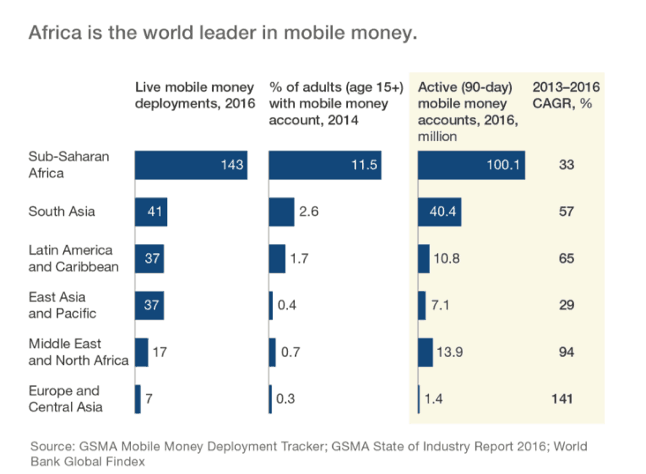 Yet despite Africa’s impressive mobile money penetration, much of the continent’s population remains unbanked or underbanked. In sub-Saharan Africa, only 34 percent of adults had an account in 2014, and the rural poor are at a particular disadvantage. That’s why it’s so encouraging to see another trend developing in tandem with Africans’ embrace of fintech: namely, investors’ embrace of African fintech companies.

Financial innovation in Africa has become a prime example of the emerging capital market continuum. As countries ascend the continuum, they avail themselves of a lower cost of capital which makes them more competitive globally, and thus more competitive in their own domestic markets. Africa’s reputation for innovation as the global leader in mobile money is a key driver behind the continent’s burgeoning fintech investment scene, particularly in sub-Saharan Africa. A recent Finnovating for Africa report on the continent’s fintech startup space released by Disrupt Africa highlighted that 57 African fintech startups raised over $92 million in funding between the beginning of 2015 and the end of May 2017, with the amount of investment coming into the space expected to rise exponentially in the coming years. Payments and remittances startups account for the majority of Africa’s over 300 fintech startups, and the report found that African blockchain startups were the most successful in terms of accessing finance, with 39 percent securing funding.

Meanwhile, total African fintech investment is estimated to have increased by a compound annual growth rate of over 58 percent between 2014 and 2016, to $800 million (from $200 million), according to the PWC Nigeria Fintech Survey 2017. It could be valued at $3 billion by 2020, with Nigeria and South Africa garnering a major portion of these investments.

More investment means more digital financial inclusion. For just one of many possible examples, look to Nigeria: Out of the country’s 180 million population, only 25 million people hold a bank account, and most of them have very low balances. Yet payment firm Paga, founded in 2009, is rapidly bringing millions of unbanked Nigerians into the banking fold. Paga’s six million customers can make payments through options ranging from smartphone-supported apps to simple codes punched into basic phones, or through Paga’s nationwide network of 11,000 agents which is set to double within a year. As it becomes increasingly vital to delivering access to financial services in Nigeria, the company has seen growing investor interest, raising $13 million in financing in 2015 with participation from Omidyar Network and Acumen Fund, to name a few.

What does this mean to the end user? Fintech has largely been seen by most analysts as a facilitator of economic growth in Africa. It has lowered barriers to entry for customers, reduced the cost of transactions, and improved the quality of financial services, thereby helping to reduce financial exclusion. But perhaps the most exciting aspect of fintech is the ability of user data to facilitate lending without requiring a lot of paperwork – as well as to enable better individual sizing and pricing of loans. Several players in the fintech space are exploring new credit-scoring approaches, as well as predictive mechanisms to best assess customer needs and deliver financial services. Also, since traditional financial services are mostly concentrated in urban areas, fintech can tackle the problem of rural access as well as the provider cost and customer fees associated with lending. Disruptive innovations in mobile financial technologies, such as digital wallets, peer-to-peer payments, distributive ledger technology and others can help enable instant access to money, enhance financial capability and leverage big data for better risk management – thereby reshaping financial services.

Some Reasons for Caution

Although Africa is fertile ground for new fintech innovations, the law is not always able to keep pace, as regulators must carefully assess the impact of this new technology on the financial system. Concerns over regulation, data protection, cyber security, etc. remain present and must be closely monitored. There is also a danger of saturation, especially in segments such as payments and remittances. The market will likely see more consolidations and acquisitions going forward.

It’s also not clear if fintech can take over the full value of intermediation. Banks still have a role to play, even though banking has historically been one of the sectors most resistant to change. And though some have struggled to adapt to the digital transformation, banks are increasingly entering into this space and collaborating with fintechs, telecoms and IT companies, either directly or through investment. This collaboration is blurring the lines that once defined players in the financial services, banking and technology industries.

Regardless of who carries it forward, financial inclusion will be a key component for promoting strong and stable economic growth in Africa, and fintech will play an important role in its success. Growing investor interest in the sector is a trend that’s worth watching.

Iftin Fatah is an investment officer at the Overseas Private Investment Corporation (OPIC) and a financial and private sector development specialist.

Photo by Olu Eletu on Unsplash