I am familiar with the burgeoning tech scene in Africa and the over 100 tech hubs that have sprouted up across the continent in recent years. However, before arriving in Kigali earlier this month, innovation and entrepreneurship honestly were not the first associations that came to mind when I thought of Rwanda. I knew, of course, that the country had made great strides in recent years in the fight against poverty, but with a population of only 11.2 million people where 85 percent of the country works in rural agriculture I did not see Rwanda as the next “start-up nation” in Africa.

True, it is not quite there yet, but it’s definitely moving in that direction with government support and lightning-fast Internet access (Rwanda benefits from a nationwide fiber-optic network and a country-wide 4G network is on its way), incredible ease of doing business (it takes less than six hours to register a business) and low corruption (ranked least corrupt country in East Africa). The conditions are definitely in place for an innovation boom in this emerging tech and service centre, which is actively positioning itself as an easy entry point into East Africa and its 150 million inhabitants.

Earlier this month, I was exposed to some of Rwanda’s aspiring young entrepreneurs at a series of innovation workshops hosted at kLab, Kigali’s thriving tech hub. The workshops where run by an innovative Israeli startup called nFrnds in partnership with the Pears Innovation for International Development Program. nFrnds has created a USSD-based mobile platform, “Connecting the Unconnected,” on even the most basic phones. The company’s products currently include chat, email, Wikipedia and mobile agriculture solutions, but as we would learn throughout the workshop, the possibilities for this technology are virtually limitless.

During the two-day workshops, participants learned systematic innovative thinking methodologies and rapid prototyping techniques to create working prototypes of innovative mobile services, without any programming background. Services created ranged from receiving advice on agriculture inputs, to managing doctors’ appointments, booking public transportation and a micro-savings device based on mobile money. With partners such as MTN and Tigo, each of which sponsored a workshop, as well as Microsoft 4Afrika, think and kLab, representatives from various respected outfits all offered their encouragement and support to the young entrepreneurs. The message, time and time again, was clear: There is huge potential for converting some of these services into viable businesses, especially as nFrnds is launched in Rwanda in the coming weeks. 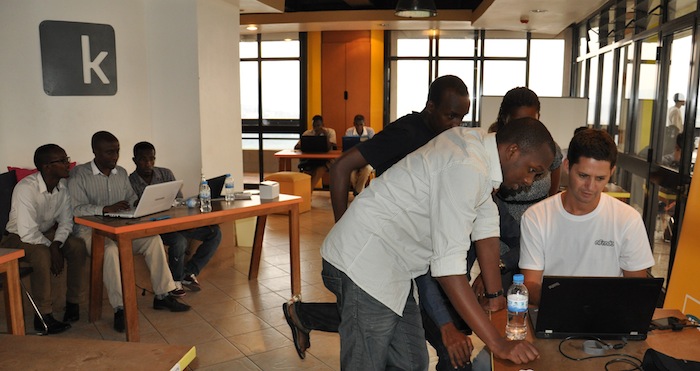 These workshops offered a great example of the power of connecting Israeli technology and innovation with the ingenuity and entrepreneurial spirit that is flourishing across the African continent. Israel has the second highest concentration of start-up companies after Silicon Valley, is undeniably a world leader in R&D and has the highest patent-to-population ratio of all the nations of the world. Yet, until recently, most of this entrepreneurial energy has been focused on cutting-edge technologies for Western markets. But this is changing. Slowly, there is an emergence of visionary start-ups like nFrnds, along with other such as Mobile OCT (mobile device to detect cervical cancer), PrePex (device for male circumcision) or LivingBox (winner of the Pears Challenge for their “farm in a box” for inner-city agriculture in developing countries) that have begun to lead the way for Israeli innovators. As this happens, more Israel entrepreneurs have started looking at opportunities for solving some of the most pressing challenges in emerging markets. With Israel’s vast expertise in renewable energy, health, water, education and agricultural technologies, there is huge potential for more Africa-orientated start-ups coming out of Israel. Of course, they cannot do it alone; Israelis need African counterparts who are familiar with the local context and can better identify opportunities on the ground for applying these technologies.

The nFrnds workshop was an excellent example of the power of merging Israeli innovation and African entrepreneurship, and we are excited to continue to explore further opportunities for collaborations that bridge the established Israeli entrepreneurial ecosystem and the new generation of entrepreneurs coming out of Africa.

Caylee Talpert is the deputy director of the Pears Innovation for International Development Program based at Tel Aviv University. The Pears Program works to connect Israeli innovation with challenges in developing countries. For more information contact cayleeta@post.tau.ac.il