Making it Rain: Solar-Powered Irrigation and the ‘Household Productivity Ladder’

Solar energy can be put to any number of constructive uses in emerging market households. But our North Star at SunCulture is increased household productivity. Whether that’s making more money, being able to do more work or having time to go to school, we align our efforts to provide solar-powered irrigation with helping people become more productive.

So why do we start by helping people move water? Because it has the greatest impact on the most number of people’s productivity. Let’s break it down. Here’s a story to help put this into context.

A few weeks ago, I visited one of our customers, Christine Wajiru. She’s 66 years old and, in many ways, she’s like a lot of our customers. Wajiru lives on her 1 acre farm, off-grid in a rural area of Kenya, and has a hand-dug well. To get water, she had to lower a 20 liter bucket to the bottom of her 70 meter well, using a pulley system to bring it to the surface. It’s not an easy feat – I tried it. (For reference, 20 liters of water weighs 20 kilograms). Every day, she would pull the bucket up 10 times. She used this 200 liters of water to meet her domestic needs, and she gave the rest to her cows. If her husband came home late from work and was too tired to pull more water to the surface, their cows wouldn’t get enough water to produce much milk. Because selling milk is her main source of income, this was problematic. 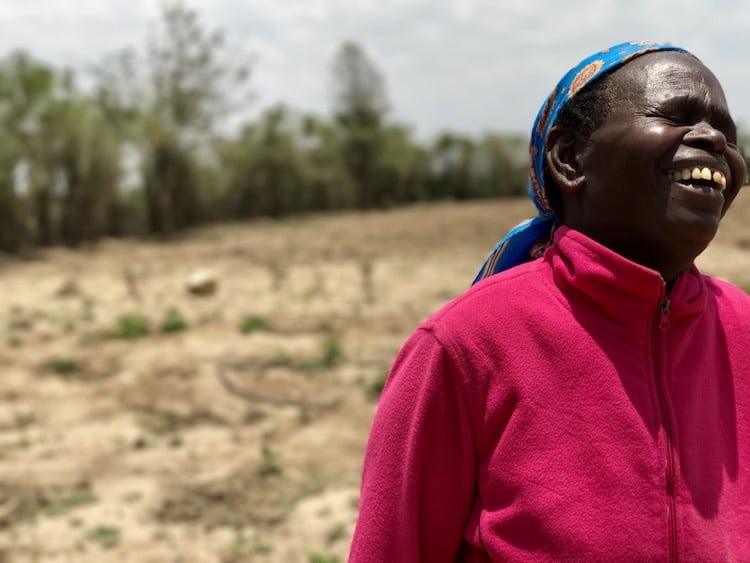 Christine Wajiru, a smallholder farmer in Kenya, has seen a marked increase in productivity on her farm since buying an irrigation kit from SunCulture.

This is an important story because the largest client segment by livelihood of those living on less than $2 a day are people living in smallholder farming households, similar to Wajiru. These 2.5 billion people not only need water to meet their domestic needs, but they also need water to grow crops or feed livestock in order to make a living.

Wajiru became a SunCulture customer in August. She received our new low-cost solar water pump, the RainMaker, under our Pay-As-You-Grow financing program. She now gets 4,000 liters of water per day, which she uses for her domestic needs, to give to her two cows, and to farm a quarter acre of land. Her cows have doubled their milk production, earning her $7.60/day, and her quarter acre of local vegetables will give her an additional $1,500/year.

While we’re really proud of Wajiru’s success so far, our job is far from done. We want farmers like her to continue to become more and more productive instead of just raising their glass ceiling. At SunCulture, we think of our work with farmers as bringing them up the smallholder farming household productivity ladder, or “the ladder.”

The question we ask ourselves when thinking about the ladder is, “How can we increase farming household productivity in the most affordable way with the least amount of behavior change?” The answer to that, or the first step on the ladder, is irrigation. Irrigation increases crop yields by two to five times – which is important because without increased food production, farmers do not have much room to become more productive, i.e. going up the ladder.

By making water available at a price and specification suitable for smallholder farming households, we not only allow these households to use water for their primary needs, but we also allow them to start irrigating with little behavior change, like in Wajiru’s case. Wajiru wasn’t growing crops before she bought the RainMaker, but she put her extra water to use on her farm.

When Wajiru’s ready next year, we’ll refinance her to help her purchase a SunCulture drip irrigation kit, which she’ll use to increase crop yields and expand the area she has under irrigation. Later, we’ll help her acquire other productive assets, such as post-harvest processing machinery or cold storage. We don’t believe in short-term relationships with our customers. Our intention is to continue to work with our customers, like Wajiru, to develop solutions that continually meet their productivity needs so that they can live a healthier, more dignified and more prosperous life.

So why do we start by helping people move water? Because it gets people on the ladder.

Samir Ibrahim is the CEO and a co-founder of SunCulture, headquartered in Kenya. SunCulture sells affordable solar-powered irrigation solutions to smallholder farmers in East Africa.