NexThought Monday – Test Tubers: Why potatoes in Bangladesh are turning heads in the Andes

My bedside reading doesn’t normally include the Bangladesh-based agricultural journal Plant Tissue Culture and Biotechnology, so I’d likely have missed this article from the journal’s December issue were it not for my colleagues at BRAC in Dhaka. It turns out that BRAC’s experiments on potato cultivation have drawn attention as far away as Peru.

Led by biotechnology scientist Javier Zapata, BRAC researchers in 2009 set out to see if they could alter prevailing methods of in vitro micro-propagation techniques for potatoes – that is, the methods commonly used for growing cloned plantlets in laboratory test tubes – in order to dramatically reduce costs for small farmers in Bangladesh, Uganda and elsewhere. It was thought this might be difficult to do while keeping the plants free of disease.

The results, so far, are promising. In short, the researchers have found a way to reduce costs but keep quality high. The experiment, and the thinking behind it, offers a window into the ways that small (and sometimes counterintuitive) changes to existing production methods, especially for basic supply chain commodities like potato plantlets, can be hugely beneficial to micro-entrepreneurs.

If you’re a subsistence farmer of potatoes, cassava or bananas, you’ll often sow your crops by taking cuttings from other plants – say, from a neighbor, from the wild or from your own old stock. This traditional cloning method might be smart and cost-effective in the short term, but it leads to a build-up of disease, driving yields down over time and often incurring devastating losses. One 2005 infestation of banana bacterial wilt in Uganda led to an estimated loss of $35 million. Poor farmers bear the brunt of these crop failures.

An alternative method of in vitro micro-propagation involves cloning plantlets in a laboratory setting. This can lead to dramatic gains in crop yields, but only if the plantlets remain disease-free over several generations. So far, the only known way to do that is by maintaining a carefully controlled environment, with costly air conditioning, lighting and humidification. 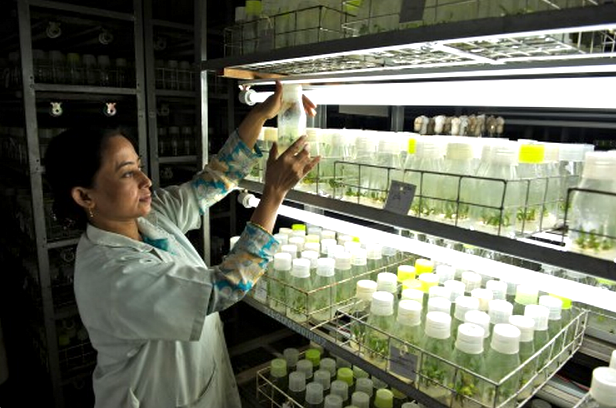 Here’s where Zapata and his researchers came in. They saw that plantlets produced under such conditions were prohibitively expensive for smallholder farmers. The cost of one test tube banana plant in Kenya is about $1.30, or five times the cost of a traditional cutting. “One hectare of banana crop will need an initial investment of $1,000,” Zapata told me. “As a consequence, good quality in vitro crops remain out of reach of many poor farmers.”

Small farmers produce about 80 percent of the food consumed in Asia and sub-Saharan Africa, according to the International Fund for Agricultural Development. For most of them, the AC bill alone is a deal breaker, leaving aside the ever-present problem of frequent power outtages.

Zapata replaced the conventional method of temperature, light and humidity control with ambient lighting and air, building a greenhouse – a sort of open-air lab – out of corrugated plastic that allows partial passage of natural light. The bill for electricity, the highest single cost after staffing, dropped 75 percent in a lab that produced 300,000 plantlets. After four years of testing, covering summer, rainy and winter seasons, Zapata and his team found virtually no difference in yields or disease levels between his plants and those grown under highly controlled conditions.

This has ramifications for more than just potatoes. BRAC achieved similar results in banana, strawberry, turmeric and gerbera. The potential for this method is especially high for nutrient-rich crops like orange-fleshed sweet potatoes.

I spoke to William Roca of the International Potato Center in Lima, Peru, who had already reviewed Zapata’s findings with interest. Family communities in the Andes are interested in pursuing these low-cost micro-propagation methods in simple labs, but they’ve needed assurance that quality can be maintained over multiple harvests. “Farmers have a lot of enthusiasm and wish to do it, but they need a sort of pilot – a simple-technology, low-cost, low-input pilot,” Roca said.

Is achieving affordability really as simple as shutting the power off and removing it as a cost factor? It frankly made me wonder why nobody had thought of this before.

One reason might just be habit. Existing techniques for micro-propagation were initially developed for larger industrial producers in the West. “Scientists in developing countries, including me, tend to want laboratories similar to the ones in which they were trained in the U.S. or Europe,” says Zapata. “In these countries, it is necessary to use artificial light and controlled temperature because during the winter season, the number of hours of natural light is short and the temperature is low. In South and Southeast Asia, Latin America and sub-Saharan Africa, you have plenty of light and the temperature doesn’t go that low.”

He added, “There is a perception that in vitro technology is very complicated and requires highly trained staff at the master’s level. During my research at BRAC, I trained two women with high school levels of education into excellent lab technicians. I valued their contributions throughout my tenure enough to name them co-authors of this paper.”

Gathering long-term data on the productivity and cost-effectiveness of the Gazipur plantlets will take several more years, so it’s a little early to say if this is a game changer. The plantlets have not yet been marketed to farmers.

Even so, there are important lessons here. To start: Don’t take it as a given that the best source of productivity gains is the introduction of new technology. If anything, Zapata and his colleagues solved the problem by literally pulling the plug on technology.

It’s also a good reminder that many of the market mechanisms we currently have in place – and this is true in health, education, finance and other fields – were originally designed for people of relative means. BRAC’s experience in supply chains shows it’s possible to run supply chain businesses sustainably while redressing this imbalance.

Though a nonprofit, a majority of BRAC’s spending in Bangladesh is covered by revenue from its own activities; a seed enterprise, for instance, generated $1 million in surplus on $20.5 million revenue in 2013. The organization is exploring revenue-generating models in the 10 countries in which it operates outside Bangladesh.

Whether this technique gains traction or not, the work reminds us that even for something as basic as the potato, there’s a lot we still don’t know about making markets work for the poor.

Scott MacMillan is a former freelance journalist who now works as a writer and communications specialist covering poverty and development issues for BRAC and BRAC USA, the organization’s affiliate in the U.S.

Photo courtesy of Sara A. Fajardo for CIP.