Last week at Social Business Forum Asia 2011, organized by The Grameen Creative Lab, Fukuoka, Japan was named a “Social Business City.” Fukuoka is the second city to receive that moniker, Wiesbaden, Germany being the first when Grameen Creative Lab first created the designation in November 2010. In the case of Wiesbaden, the initiative is supported by many academia, media, politics and society who have agreed to officially partner with Gramee Creative Lab in establishing the city as a pilot for social business. The effort is largely built upon the network of these key local stakeholders committed to incubating and creating social businesses.

Last week’s event was organized by GCL@Kyushu University (a social business incubator created jointly by The Grameen Creative Lab in Germany and Kyushu University in Fukuoka). The purpose of the forum, which gathered participants from government, NGOs/NPOs, and companies was to facilitate development of self-sustainable social business projects for the survivors of the East Japan Earthquake of March 2011, known as Japan’s “3-11.”

The “social business city” model follows the vision of Nobel Laureate and Grameen Bank founder Muhammad Yunus to evolve the these towns into a global pilots for social businesses. OK, but what exactly does being a Social Business City mean? I put that question to Daniel Nowack, who is the project lead for Social Business City Wiesbaden (pictured below). Via email, he provided plenty of evidence that this is more than just a nice city moniker.

NextBillion.net: So what have been the tangible impacts for Wiesban, Germany since it was named a ’Social Business City’? 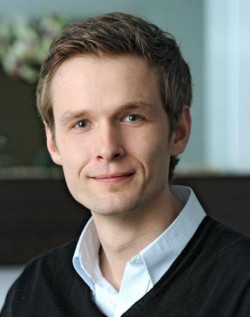 Nowack: Some achievements so far have been:

• Social Business Women (initiated by BerufsWege für Frauen) The Social Business Women project provides coaching, mentoring and financial support to women entrepreneurs that either have a socially challenging background or bring forward a social business concept. The initial investment amount of the fund provides 100,000 EUR to approximately 10 to 15 women entrepreneurs. The microfinance concept is based on the Grameen concept and supports women in designing their business plans, coaching them on their personal strengths and preparing them for their role as entrepreneurs. After receiving their loans, women engage in so-called “success teams”, that allow them to share experiences and knowledge with other women entrepreneurs and all women receive coaching and mentoring during the first five years of their business operations. The first six women entered the program and two have already received their loans.

The Grameen Creative Lab The two social business labs in Wiesbaden excited almost 200 people about the idea and developed eight social business concepts. Three of these concepts are currently further developed by The Grameen Creative Lab to be implemented in Wiesbaden. In addition to the Social Business Women Fund, an all-gender social business fund is currently in development. All legal forms are finalized and all partners are hoping to implement the fund within 2011. In strong recognition of the efforts in Wiesbaden, a delegation from Luxemburg including Prince Guillaume of Luxemburg, the Luxemburg Minister for Solidarity Economy and the mayors of three cities in Luxemburg visited Wiesbaden in May 2011 to learn more about the concept of Social Business Cities.

NextBillion.net: How will you measure success for Fukuoka?

NextBillion.net: Will there be a focus on social business there that can directly benefit the earthquake reconstruction and recovery efforts?

Nowack: Fukuoka is definitely committed to support the people affected by the earthquake and almost the entire agenda of the Social Business Forum Asia was focused on this topic. A great number of ideas have been generated that will now have to be carefully assessed in terms of feasibility and impact on the disaster-stricken region. The work of the coming weeks and months will be focused on this topic.