NexThought Monday: Dealing With the Reality of Non-Fundable Zones

Editor’s Note: This post was co-written by Rob Katz.

Last year, we were privy to an email discussion among Peter Deitz at SocialFinance.ca, Kevin Jones from SOCAP, Nathaniel Whittemore of AssetMap (and the well-known voice who made Change.org’s social entrepreneurship track what it is today) and Ellie Skeele, founder of social enterprise Himalayan Wild Fibers. It was an eclectic group indeed, formed ad hoc to discuss what appears to be the surfacing of “gaps within the gap,” or what have been informally dubbed Non-Fundable Zones.

The missing middle is a sector with limited funding, and organizations that provide vital services or products to it, often choose to limit their focus to specific geographies. This makes sense, as it’s hard to maintain a strong on-the-ground presence everywhere, all at once. But from the perspective of an enterprise outside the circle, it can be a major problem. Social entrepreneurs already face the challenge of not being social or financial enough to fit within existing philanthropic or commercial funding schemes

While the onset of Non-Fundable Zones is difficult to quantify, given the limited funding data of social enterprises, the discussion raised some points we’d like to pose to the community to reflect and comment on. First of all: Which dollars skew which way, to whom and to where?”

In the U.S. and Canada, we see a proclivity towards the young and well educated, with high-profile organizations like Echoing Green and the Unreasonable Institute selecting or otherwise crowdsourcing the best and the brightest – but is that at the expense of more indigenous or non-traditional (read: older) entrepreneurs?

A common source of start up capital are business plan competitions and challenges, which are potentially lucrative, but are open exclusively for students and/or students that have graduated within 2 years (See MIT’s $100,000 Global Challenge entrepreneurship competition, UC Berkley’s Global Social Venture Competition).

Internationally, the partiality seems to differ. Whereas the non-funding zone in the West seems driven by age or membership in an elite network, in the developing world, a preference for certain geographies seems to be trending – possibly driven by the attraction to being part of a cluster of funding organizations. This close proximity, characteristic of the social venture fund industry emerging in India, allows for tacit knowledge sharing and the ability to more easily syndicate deals. In addition, it can be presumed that because of the level of political risk, corruption and instability, the cost of doing business in a country presumably holds a bearing on the decision of where to fund.

Both domestically and internationally, some sectors inevitably get left out. In Canada, the Michael Lee-Chin Family Institute for Corporate Citizenship is in the process of conceptualizing a social venture fund for mental health patients turned entrepreneurs. These niche avenues for funding, however, are the exception and not the rule.

Meanwhile, Skeele’s enterprise brings job prosperity to families in Nepal by selling fibers from plants grown in the Himalayas to international markets – however, finding funding to scale her operations has been a challenge. The enterprise, she finds, does not fit neatly into the usual healthcare, water, agriculture, housing or hunger sectors. Since most social venture firms do not accept unsolicited proposals, this adds further stress to a stressful search. While programs such as Ashoka’s Changemakers takes an open-source/crowd-sourcing approach to funding social ventures, fitting into the development flavor of the month is still a prerequisite.

Or, perhaps this is a chicken and egg issue. Does available funding stimulate opportunity or does funding gravitate towards opportunity? In a 2009 research reportreleased by the Global Entrepreneurship Monitor, 49 countries were surveyed on the level of social entrepreneurship activity in the country. The GEM distinguishes between three types of economies:

3. Innovation-driven economies are characterized by their production of new and unique goods and services that are created via sophisticated and often pioneering methods (e.g. U.S., UK, Germany)

Generally, as countries develop economically, they tend to shift from one phase to another. This certainly has an impact on the level of entrepreneurial activity, and according to the study, slightly impacted social entrepreneurship activity. 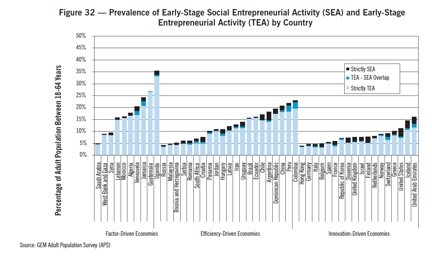 More men than women were found to start social enterprises, and tended to be active at younger ages in comparison to business entrepreneurs. Further, better-educated individuals were more likely to be social entrepreneurs. This indicates that Non-Funding Zones may be due to a country’s unique social, cultural and economic factors – and leading funders to where social entrepreneurship opportunities are concentrated. 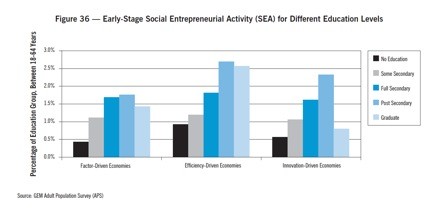 But let’s not be facetious here – the idea is not that all social enterprises should be funded either. As Nathaniel put it, part of the maturation of an industry is finding a standard of quality within a crowd mustered by excitement. A capital market for socially oriented ventures should be competitive. However, the problem lies when the situation goes well beyond simple competition. This requires identifying a clear intersection where opportunity and funding meet.

Just because you are in Nepal or another NFZ does not mean you are an unworthy enterprise. It simply means you may be stuck in a Non-Funding Zone.