One Laptop Per Child … But What “Laptop”?

The convergence between PCs, which are growing more mobile, and mobile phones, which are becoming more like PCs, is well under way. It’s hard to believe that transformation began in earnest just three years ago when Apple announced the iPhone. It was really the first complete integration between both a mobile phone and a PC platform that was Internet and multi-media enabled. The iPad tablet was the next device announced by Apple in that new category of devices called Mobile Internet Devices (MIDs).

It’s no secret this is where the innovation in IT is be heading. A recent IBM survey (2,000 information-technology professionals in 87 countries) found that more than half believe that within the next five years, more developers will be working on mobile applications and cloud-based architecture than traditional computing platforms for enterprise. Ninety-one percent of IT professionals surveyed said cloud computing will overtake on-premise computing as the main way that businesses access data within the next five years.

“The cell phone is no longer a gadget – it’s what IT is going to become,” said Jim Corgel, an IBM general manager of independent software vendors and developer relations told the Wall Street Journal. 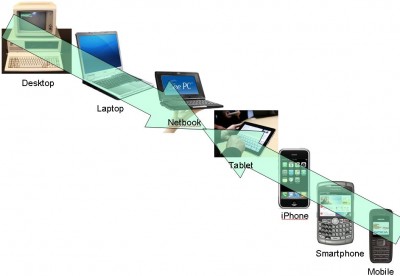 (Above: The merger of PC and MID. Graphic by Michel Bézy)

These new mobile devices will become the user access devices of choice in the next five years. Today, already one in three devices is a smartphone, a MID, or a netbook. Just as fixed, hard-wired systems will be replaced by cloud infrastructure, these new devices that bring Internet access to mobile phones will help Africa bypass the need for computers when linking into networks to access applications. Africans are turning their late adoption of technology to their advantage by leapfrogging landlines and personal computers to mobile phones.

It is therefore important that schools in Africa that want to develop ICT awareness with their young students use these new mobile Internet devices. In doing so, the children will get familiar with this new category of devices that will be in use by the majority of people in Africa in the coming years. And, if the technology continues its steady march, they will experience mobile access to information and better understand the new innovations that such mobility makes possible.

This should also benefit schools, as these devices are much less expensive than the traditional PCs. A traditional laptop PC still costs around 500-800 USD. The One Laptop Per Child (OLPC) PC’s price is 100USD. It is really more a netbook than a laptop because of its small size, its light weight and its 12 hours battery life. 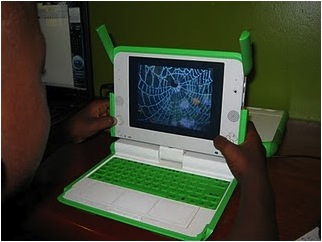 (Above: A child using the OLPC Laptop at Kigali’s airport where wireless Internet access is free. Image by Michel Bézy).

This OLPC PC, in my opinion, is one of the most admirable technical achievements when you look at all the technical challenges they addressed, not speaking about the “political” challenges. But even more, the OLPC team didn’t rest on their laurels, and they are preparing a new tablet MID. Although there has been a slight delay in the rollout, OLPC’s XO-3 “crazy-thin tablet” will be priced at just 75USD!

The iPod Touch, a portable device that can access Internet using wireless connection are now available for a starting price of 140USD. At the Culbreth middle school in Chapel Hill, North Carolina, students can carry iPod touches throughout their school day. They are allowed to bring their iPod touches from home and use these during the day as long as each student and parent(s) agrees to adhere to the restrictions explained in the use agreement. Students who do not bring an iPod touch can use iPods provided by the school for free. Those iPods cannot be taken back home, but are assigned to individual students and used throughout the school day. Students can then use these iPods from anywhere in the school and access Internet using a wireless network. They can use them to search for information relevant to their courses or to use applications performing the tasks required by their class assignments. The school is basically teaching them to become “mobile knowledge workers” that are capable of finding information needed to perform their tasks. But more than that, they can also collaborate with their fellow students through the social networks.

So in addition to providing children with the next generation information access mobile devices, the school’s cost can be dramatically reduced by using those versus expensive older laptops or they can serve more children for the same cost, which has implications for schools in emerging markets. Obviously, in Africa schools should still accept donations of the older laptops when offered, nothing beats free! And it’s certainly better than no PC at all.