Part 1: From Local to Global: Unite for Sight’s Expanding Impact

Jennifer Staple-Clark was a sophomore at Yale when she founded Unite for Sight as a student organization in 2000. She started with modest goals, aiming to help underserved people in her local community overcome barriers to eye care that resulted in severe vision loss. But over the next twelve years, Unite for Sight would grow from a dorm room-based student group to a world-renowned non-profit, serving 1,500,000 patients and facilitating over 63,000 sight-restoring surgeries.

Unite for Sight’s impact has garnered regular coverage on CNN and in the New York Times, and it has helped make Staple-Clark an internationally recognized leader in the realms of global health and social entrepreneurship. The organization’s annual Global Health & Innovation Conference, which convenes 2,200 participants from dozens of countries, has become the world’s largest global health and social entrepreneurship conference. And Staple-Clark has earned accolades ranging from the American Institute of Public Service’s National Jefferson Award For Public Service to the John F. Kennedy New Frontier Award.

I spoke with Staple-Clark about Unite for Sight and its related projects. In Part 1 of our discussion, she explains its unique model, and how she built a small student organization into an acclaimed global NGO. (Read Part 2 here, to learn about Unite for Sight’s innovative revenue-generating programs, and how the organization harnesses its volunteer, research and fundraising efforts to support its mission.)

James Militzer: How did you evolve from a local group into an international one?

Jennifer Staple-Clark: Unite for Sight continued as exclusively a local student organization until May of 2003. And it was actually as I was graduating from college that I thought that this model was working very well for eliminating barriers to care within New Haven, and I wondered if I could expand it to other university campuses throughout the U.S. and Canada. So I established a model for chapters, so that new chapters could be established at various universities throughout North America. And that’s how it started growing and expanding exponentially. We had about 25 chapters that were established just in the summer of 2003.

And as that next academic year progressed, there was a lot of awareness of Unite for Sight and the work that we were doing, and that’s when we started receiving inquiries about bringing Unite for Sight’s model of eliminating barriers to care to developing countries. Ghana was the first country – we had a pilot program in the summer of 2004, where we worked with a local eye clinic and a local ophthalmologist to eliminate barriers to care in just one village within the country.

JM: Did you adapt your chapter model to make it work abroad? 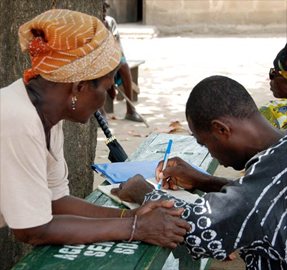 JSC: After the organization grew, we established separate program divisions. The chapters continued as student organizations that work locally to remove barriers to care within their communities. But we also added a fundraising component to those chapters, so they are fundraising for our international programs and contributing to eliminating preventable blindness for the patients that Unite for Sight is working with abroad.

Our health care delivery programs internationally – currently we’re working with five eye clinic partners in Ghana, three in India, and one in Honduras – and all of those programs are direct partnerships with local eye clinics. We work with local ophthalmologists and their local ophthalmic nurses and optometrists – daily, year-round programs that are constantly providing eye care for patients living in extreme poverty in villages. So everything is locally led and managed by those local ophthalmologists, with a lot of support in the form of human and financial resources from Unite for Sight.

So as an example, we provide as-needed funding for them to coordinate a vehicle to bring ophthalmic nurses and optometrists into a village each day, to provide care in that village. And also to hire additional ophthalmic nurses and optometrists, so that they can focus every day throughout the year on these outreach programs. So each day, the eye clinics are seeing anywhere from about 100 to 300 patients, sometimes more. And similarly, we provide financial resources in the form of funding for the surgeries themselves, as patients in the villages are identified as needing cataract surgery, or pterigium surgery, or various forms of advanced care. They’re not able to afford that, so we provide funding so that the eye clinic bills Unite for Sight for those surgeries.

And in terms of human resources, each year we recruit and train about 250 volunteers – we call them Global Impact Fellows – and they volunteer abroad. Many of them are students, but they range in age from 18 to senior citizens. They don’t need to have any particular skill set or interest in eye care. It’s very much a global health immersion experience, where they are learning from local eye doctors about barriers to care, and strategies to eliminate barriers to care. And they also support and assist those local eye doctors in the field, with things like visual acuity testing, patient intake, and distributing the glasses and medication that are prescribed by those doctors.

JM: So the incentive for clinics to work with you is that they get more patients who are subsidized through you, along with the benefit of your expertise and the volunteers that you place with them?

JSC: Exactly. And we work with for-profit eye clinics, so there’s actually two divisions that are occurring at any one time with each of those clinics. Before we partner with a clinic, we require that they be self-sustaining. So they need to have their own set of private, paying patients: those who don’t really have barriers to care, who are entirely separate from Unite for Sight. And everything that goes into running an eye clinic is funded by these for-profit arms.

JM: Is there any reason you haven’t allowed a profit motive to come into the equation as an incentive for partner clinics?

JM: So when a clinic sees a dramatically increased patient volume thanks to the outreach that you do – but isn’t making any additional profit from this extra work – is that always seen as a positive? 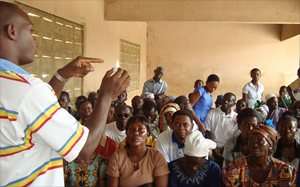 JSC: We work with really remarkable, genuinely dedicated local ophthalmologists and their staff. And they work many, many more hours, because they’re providing so many more surgeries for those patients. But their motivation is really their genuine dedication to wanting to make the lives of their patients and their families and communities much better.

We have nine partners currently, and with all of our partners, we never went to them. They’ve always come to us and said that they want to be involved with providing care for patients living in extreme poverty. And they had tried their best, on a very small scale with whatever resources they had, to provide surgeries for free. But they really wanted to generate an entire outreach division so that they could be providing care for many more patients.

And we build up the local capacity of each of those clinic partners. So as an example, one of our partners in Ghana, Dr. James Clark, did 229 surgeries during our first year working with him in 2005. In 2011, he did 2,954 sight-restoring surgeries for village patients. This was not including those patients who don’t have barriers – that for-profit division which is separate from Unite for Sight – this is exclusively patients that came through the Unite for Sight outreach division. Sometimes he works until midnight to provide the patients with surgeries, because they’re coming in from the villages. And the quality of the surgeries is remarkable. So he’s really driven by ability and genuine dedication to restoring sight for the patients. And he, and all of our partners, are indeed working much harder, and many more hours. But they say that they love every moment and that it really is their passion.

JM: Is sustainability a concern, with doctors performing that much work?

JSC: Well, the partners that we work with, as I mentioned, are just so genuinely dedicated, and we never have a quota. So we don’t say, “You need to do 4,000 surgeries” – it’s always how much they are willing and able to do, and how many patients they’re able to reach. And they are working constantly to build up their capacity locally, and adding additional outreaches. Dr. James Clark, for example, started with one outreach team, and then after several years, decided that he could really build even more by having two outreach teams. And that idea came entirely from his eye clinic. So we never push them – we just help to support the work that they are very passionate about doing.

Check out Unite for Sight’s Facebook page “Dispatches from Crystal Eye Clinic’s Unite for Sight Outreaches” for daily updates and photos from their work in one local clinic in Ghana.