A Renewable Proposition (Part 2): Why the sun is shining on West Africa and solar microgrids

Editor’s note: This is the second of a two-part article on Persistent Energy Partners (PEP) and its first acquisition in Ghana. In part one, Christopher Aidun, PEP’s managing partner, discussed the strategy behind the fund (formerly E+Co) and its focus on off-grid solar technologies. In this post, we take a closer look at PEP’s first acquisition and its position in the pay-as-you-go solar sector for low-income markets.

“Solar technology already exists to solve the energy problems of every off-grid customer in the world, but the challenge is in getting those solutions to customers in a profitable manner,” said Hugh Whalan, who founded Impact Energies Ghana (now Persistent Energy Ghana).

Whalan should know. He has a background in microfinance, crowdfunding, solar energy products and the nexus between the three. He’s seen the respective business models evolve. In 2009, Whalan co-founded Energy In Common, a crowdfunding Web portal through which donors could provide energy loans to people in Ghana, Tanzania and Nigeria for solar products and cookstoves. The website attracted lenders from 35 countries who reached 10,000 villagers with their energy loans, he said.

But it became clear to Whalan that for solar energy to reach more customers, a more hands-on approach was necessary. In 2011, Whalan moved on to found Impact Energies, which not only sold solar systems and solar lanterns, but also built a network of 100 repair technicians to maintain them. Funded with a grant from National Geographic, the enterprise focused on building an entire supply chain, using microfinance institutions as the distribution hub for plug and play systems. Nate Heller, whom some readers may know for his work with iuMap, joined in 2012 and serves as chief operating officer.

Late last year, Persistent Energy Partners (the for-profit entity that emerged from the nonprofit investment fund E+Co) purchased Impact Energies Ghana, and renamed it Persistent Energy Ghana. At that time, the company had reached 30,000 villagers across Ghana, but, as Whalan says, “we were still in the peewee leagues. We had nowhere near enough resources or support to reach the millions of customers we wanted to get to.

“That’s where Persistent Energy Partners was a really good fit for us. They had the resources to allow us to make a lot of mistakes early on so we could position ourselves well for growth,” Whalan said of the purchase. 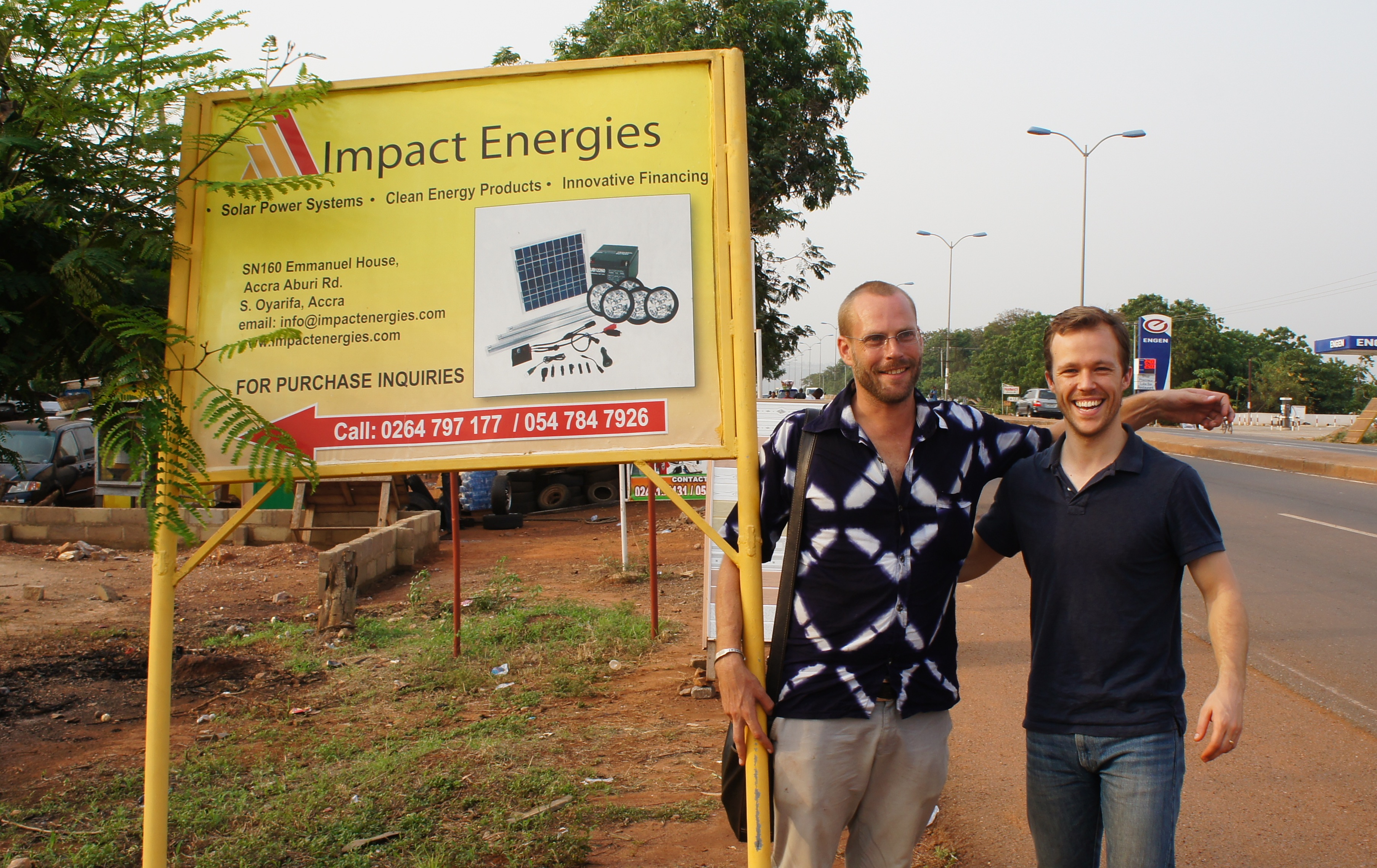 Nate Heller (left) is the chief operating officer of Persistent Energy Ghana, with Hugh Whalan, founder of the company, which is focusing on off-grid solar in Ghana. (Image credit: Hugh Whalan).

Whalan says his team is now focused on the distributed energy services company, or DESCO, model, where businesses install solar home systems or solar microgrids and sell the energy services to residential customers and small businesses. Under a DESCO model, customers would pay $6-$8 per month for access to energy provided by a solar home system or solar microgrid that is installed and owned by Persistent Energy Ghana. “We focus on basic energy needs such as lights, cell phone charging, radios and small, energy-efficient TVs.”

They have solar micro-grids operating in three villages in the Afram Plains. They also have standalone solar home leasing systems operating in seven villages a few hours outside of Accra (Ghana’s capital). Both approaches use meter technology that automatically locks and unlocks access to energy depending on whether a customer has prepaid for the service.

“There are not a lot of competitors operating in West Africa and there are more potential customers here than in East Africa,” Whalan said. “Our main game is taking proven technologies and flowing them into West Africa where we need to figure out things like distribution logistics, agent network building and pricing models, but we don’t have to work out technology kinks.”

“The challenge for a successful DESCO is managing the cost of solar energy assets invested per customer against the average recurring revenue that customers will pay for the DESCO’s energy services,” Aidun says. “Whalan and team are approaching the market exactly like this. We are confident they will get it right.”

They don’t expect to be alone in that regard. Aidun reckons that it would take an investment of about $30 billion in the energy services sector for DESCOs to reach the 100 million households currently living off the grid in sub-Saharan Africa.

Persistent Energy Partners, meanwhile, plans to continue raising capital and, partly depending on the outcome of the projects in West Africa, entering new territories.

“The winners are going to be the companies that figure out distribution,” Aidun said.