(Above: The Andean Páramo, the region between the treeline and the snowline, is an important source of drinking water. Image credit: Mariana Gonzalez.)

Colombia is a cradle of biodiversity and natural resources, home to the Andean Mountains, the Amazon Rainforest and Chocó ecoregion, and the Pacific and Atlantic coastal geographies. It also is home to a mix of cultural heritages and a growing population. With improved internal security, an improved business environment, and increased prominence as a major player in the global economy, the business landscape is also changing. And with it, there is a growing culture of social and environmental entrepreneurship.

But with deforestation rates of 0.16 percent per year, 70 million metric tons of CO2 emissions per year from energy use, and more than 50 percent of the population living below the poverty line, problems still loom in the Colombian landscape.

Growing SMEs, hosted by the Universidad de los Andes School of Management, New Ventures, CREAME, BiD Network, and the Ministry of Commerce, Industry, and Tourism, will showcase Colombian small and medium enterprises (SMEs) later this month. These companies are creating solutions to the social and environmental challenges in Colombia while creating a profit.

Companies like Biodiversa, supported by New Ventures Colombia, are halting deforestation and poverty trends. Biodiversa trades fairtrade and fairmined gold to jewelers in the United States and Europe while providing artisanal and small-scale miners a premium for the metals. The Afro-Colombia communities that inhabit this region and practice artisanal mining have an incentive to protect the land they collectively own, rather than rent it out – where it may succumb to deforestation and grazing. The gold is mined by hand and on a small scale, avoiding the use of toxic chemicals and environmental degradation. Biodiversa estimates that 4,500 hectares of the Chocó region were conserved in 2010 thanks to its efforts. 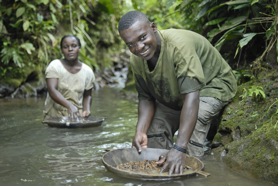 Yet another case of a non-profit organization turned for-profit is Biodiversa. The venture originated from four groups involved in Oro Verde (green gold): Asocasan, Cocomacoiro, Fundamadojarras, and Amichoco, an organization that supports the local communities that inhabit the Chocó ecoregion of Colombia. Maria Luisa Villa and Ingrid Lozada, the two women leading this venture, believe becoming a for-profit organization is the best move to increase the benefits to the miners they support. And while Biodiversa plans to eventually expand to include other products that protect the biodiversity of the Chocó region, in the meantime they are focusing on gold. In an interview with New Ventures, Villa advised environmental entrepreneurs: “Instead of solving everyone’s problems, focus on something that has commercial value and also social impact. The ripples of it will have bigger impact than trying to create a very ambitious enterprise.”

Away from the coast and forest and tucked away in the city of Dosquebradas, Resival is also reducing toxic waste and energy consumption while tackling social issues, though not through forest and biodiversity conservation.

Resival, which is short for Residuos Valorizados, recuperates hazardous paint waste and develops new paint products. It exemplifies the growing trend of recycling-focused environmental entrepreneurs in Colombia. Resival collects the waste from industrial metalworking clients that must comply with Decree 4741, passed in 2005, that requires hazardous waste to be managed by an authorized collector. Ninety-nine percent of the paint waste is recycled back into industrial paint products, closing the loop and reducing the production of new hazardous materials and energy consumption from production.

Entrepreneurs Gloria Castaño Londoño and Mauricio Muriel Arcila launched Resival soon after travelling to Brazil in 2007 to learn from Resicor, a company that also treats hazardous waste. Londoño and Arcila transferred the technology and adopted the business model to Colombia. But they also took the business one step further by using the paint residue to create new paint products. Resival also plans to expand and treat other industrial wastes to create more recycled products, but in the meantime, New Ventures Colombia mentoring has helped Resival stay focused, prepare for growth, and create a global vision.

In addition to avoiding 41 tonnes of waste in 2010, Resival works with the Organización Internacional para las Migraciones (International Organization for Migration) to employ people previously involved in internal conflict in Colombia.

With no shortage of paint waste in the world, Resival’s recycling work sustainably manages industrial waste and promotes sustainable development. Its “closed loop” and sustainably designed products set an example for other entrepreneurs and companies in the region and beyond.