Sankalp Forum Expansion to Africa: View from the Ground

Editor’s note: This is the first in a series of articles on this growing connection in advance of the Sankalp Africa conference in February. NextBillion is serving as a media partner for the conference.

In 2013, we at Intellecap expanded the Sankalp Forum program to Africa. There are many compelling reasons for “why Africa”; and we wrote about some of them in our first article in this series. In our second article we share a ‘view from the ground’ on how the social enterprise ecosystem appeared to us, where the sector seems headed, and key challenges and constraints to the growth of this sector.

One of the things that struck us early on about the African market is that the idea of a “social enterprise” as distinct from a mainstream enterprise has little resonance. As a result, at first look it can appear that the “social enterprise ecosystem” is absent or nascent. But broaden the lens to start-ups and SMEs, and you find a fast-growing and ambitious ecosystem. Incubators, accelerators, entrepreneur networks, hackathons and co-working spaces are mushrooming in hubs like Nairobi, Lagos, Dar es Salaam, Kigali, Cape Town, Cairo and Accra. About 30-60 percent of the start-ups being supported, celebrated and funded by these organizations are “social” enterprises – or businesses with a strong social impact/mandate. This blurring of lines between social and mainstream is the sign of an evolved approach to inclusive development, and is something that we have only observed in India in just the last few years. 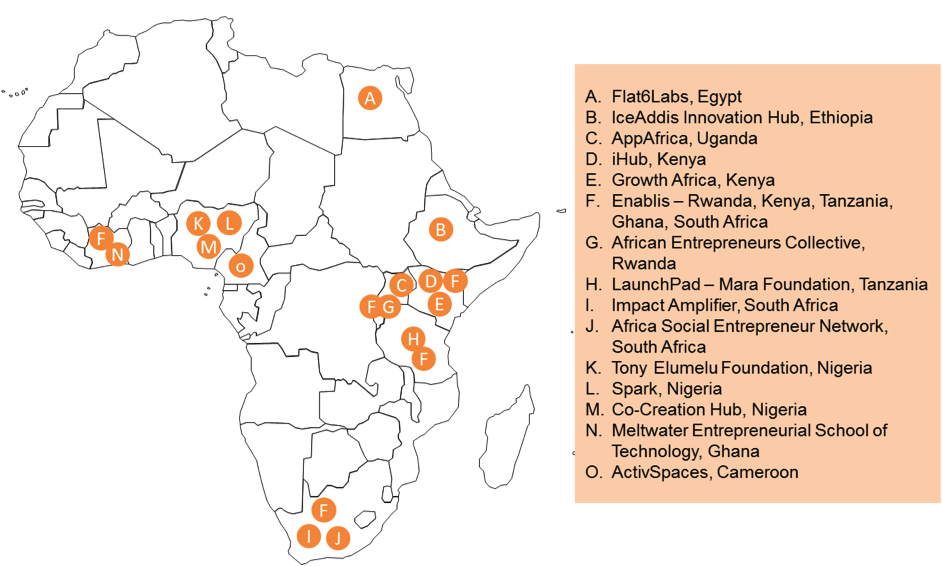 Image: We’ve highlighted some of the start-up networking and co-working spaces that support social enterprises in Africa.

Another encouraging sign is the sheer number of young entrepreneurs in Africa. Of the 100+ applications we received from 12 countries for Sankalp Awards Africa, more than 70 percent were from entrepreneurs between the ages of 25 and 35. Most were very early stage ventures with an average turnover of US$ 100,000. Agriculture, livelihoods and clean energy sectors alone accounted for 50 percent of the applications; with the rest being spread across education, financial inclusion, health, water, sanitation and technology for development.

Governments across several countries in Africa have taken note of the potential of small businesses to drive job creation and economic growth; and are now investing heavily in funding and incubating ICT startups as well as in improved curriculums and robust systems in schools and universities. A great example of forward-thinking support is the Ghana Venture Capital Trust Fund (GVCTF), set up by a government mandate to invest in SMEs. Since its launch in 2004, GVCTF has deployed US$ 17 million in 48 SMEs through five intermediary funds.

The African diaspora is also recognizing the potential within the continent and playing an active role in enterprise growth. With US$40 billion in annual remittances into Africa, this group can greatly influence economic growth in the region. Many like Dr. Moka Lantum of Microclinic Technologies (a Sankalp Africa Awards Finalist) are quitting lucrative jobs in countries like USA to start their own ventures in Africa. Others like Pule Taukobong of Africa Angels Network are channelling foreign investments into promising startups. There is growing interest among corporates and global investors in riding the upcoming Africa wave. The region has over US$ 5 billion in private equity dry powder – if tapped it will play a catalytic role in the continent’s growth.

Need for a Cohesive Agenda

With so much promise and potential, the African startup ecosystem seems poised for exponential growth in the next 4-5 years. However, for this potential to be realized, the ecosystem needs to become much more cohesive. Its current form is vibrant but highly fragmented and disjointed across the different regions of the continent. Different actors like SMEs, investors, donors, corporates and governments are largely working in silos today; and need to come together around a shared agenda. Another challenge we heard repeatedly from investors and entrepreneurs alike is that despite large amounts of capital being committed towards development in Africa, the enterprises are at very early stages of their growth and do not have the appetite to absorb significant investments. There is a need to make the capital available in instruments that are easily accessible and more suitable to the enterprise growth stage. At the same time, capital cannot be “too easily” accessible either and there are growing concerns that too much grant funding can distort markets.

From our experience in India, we have seen that a common action platform like Sankalp Forum can create incentives and opportunities for diverse stakeholders to collaborate. Sankalp has rallied together stakeholders in India and influenced the rise of ecosystem-building initiatives like the Indian Impact Investors Council and India’s first impact-focused angel network I3N. The forum has successfully facilitated and showcased successful impact investments every year. By 2013, more than 40 such investments exceeding US$ 120 million had been channelled into Sankalp enterprises – establishing the credibility of the growing social enterprise industry in India. As we expand Sankalp into Africa, we’re hoping to replicate many of these successes over the next few years. And we are not alone in this journey. In our next article, we profile some Africa-India expansions to watch out for in 2014.

Kanika Kumar works with the Sankalp Forum Team at Intellecap. In her role, she has been responsible for building collaborative communities to support entrepreneurs in India and Africa.

Dipika Prasad works with the Consulting Team at Intellecap where she focuses on incubation of early stage ventures. She is also part of Intellecap’s Africa expansion team and is working on a South-South knowledge corridor in inclusive development.