Editor’s note: We can’t possibly cover all the great panels and conversations at the four-day Social Capital Markets Conference (SOCAP14) in San Francisco. So we’re trying something a little different this year: Seen and Heard at SOCAP14. Each day we’ll assemble some of the key points and quotes from the conference. Here are a few tidbits from Day 3. Read about Day 2 here, and Day 1 here.

“The talent is equally distributed, but the opportunity is not,” said Leila Janah, founder and CEO Samasource, in describing the tech scene in Kenya and indeed across Africa.

That’s a rallying cry for Samasource, which since launching six years ago has helped provide outsourced digital work for low-income people – employing 6,000 and helping bring 25,000 people out of poverty, she said.

Janah helped kick off Thursday (Day 3) of SOCAP14 on an inspirational note, sharing the story of a Samasource employee who lives in Kenya’s vast Mathare slum. His first job was fishing out bits of metal from an open sewer, which he sold for about $1.25 a day. After going to secondary school and graduating from a computer training program in Kenya he linked up with Samasource and has been able to support his immediate and extended families.

“Our work is a lifeline,” Janah said.

That work is based on large data projects, broken into small units or “micro work.” But that micro work is going macro. The Rockefeller Foundation’s $80 million infusion into Digital Jobs Africa indirectly validated Samasource’s model and gave credence to what’s largely known as “impact sourcing.”

Samasource later launched Sama USA, an 80-hour boot camp that trains low-income students in computers. The pilot program last year showed students gained an additional $2,000 in supplemental income. In a conversation with SOCAP14 Co-founder Kevin Jones, Janah said the pilot for Sama USA had to show that the costs of training would be offset by income gains for the students who go through the project. That’s proven to be the case, she said.

Still, while Samasource has enjoyed growth it’s clear that the low-margin projects will not bring in enough revenue to offset other, potentially loss-leading business units or fund large-scale expansion. Janah hinted at a new business line the team is working on that would focus on luxury/beauty goods, sourced from raw ingredients

“We see evidence of success, but we’re really pretty hungry for more,” she said.

Her advice for aspiring social entrepreneurs: “Clarify your core values and why you’re doing what you’re doing … and embrace it with grace, grit and optimism.”

Meet the Winners and Finalists for the Gratitude Awards

Nine finalists of the Gratitude Awards were selected from 500 applicants through a four-month judging process.

One winner was selected in each of the three categories – Education, Community Development and Health – as well as one winner selected by SOCAP attendees. The winners will receive a full year of mentoring from members of the Gratitude Network, ImpactHub and other groups. 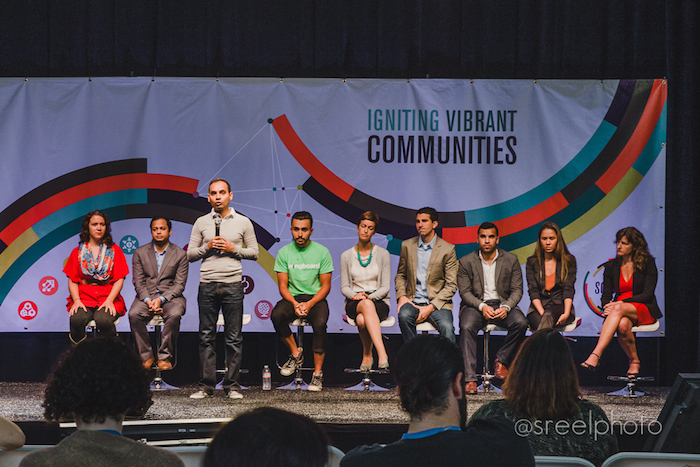 Picture this: A shipment of coffee steams into San Francisco Bay. A professional taster from a major coffee retailer takes a sip. The coffee isn’t up to her standards. As fast as it would take to send back a wrong order at Starbucks, the taster rejects the coffee shipment and back to Nicaragua (or who knows where?) it goes.

This is not what you’d call an efficient supply chain, for neither the farmer whose sweat grew the beans, nor for retailer who now has to reorder beans or find another supplier altogether.

At the session entitled Sustainable Supply Chains and Agricultural Finance in the Developing World, Jorge Cuevas said this is not a hypothetical. It’s common industry practice.

“It dents the trust of the marketplace,” said the director of risk management and product development at Sustainable Harvest Coffee Importers.

Cuevas said the coffee importer teamed with retailer Peet’s Coffee and smallholder grower Las Hermanas in Nicaragua to avoid just this sort of “send it back” scenario. The initiative took three parts. First, Sustainable Harvest trained tasters in Nicaragua (usually the sons and daughters of the farmers) to ensure the coffee produced and roasted was up to Peet’s quality. Second, the importer convinced Peet’s to brand Las Hermanas coffee, roasted by Peet’s. Third, Peet’s signed a three-year contract with Las Hermanas and, with that business locked in, the smallholder farmers have been able to get additional financing to grow, Cuevas said.

Reducing the Expense of Poverty

The adage “it’s expensive to be poor” is one that drives Dan Schulman, group president, Enterprise Growth, at American Express. “That couldn’t be more true than in the financial services arena,” he said.

The numbers seem to bear that out:

Some 2.5 billion people are financially excluded. The FDIC estimates that 70 million American adults are either unbanked or under-banked (meaning they rely on pawn shop and check-cashing services in addition to, say, a basic savings account). At the same time, Americans paid $89 billion in fees and interest, and $30 billion on bounced checks, last year. Without a checking account, low wage earners rely on money orders, which could cost them $11 to pay a $50 cable bill.

Schulman is tasked with coming up with new products and services that meet the needs of those trapped in the web of fees.

“We can dramatically reduce the cost, simplify the experience and create alternatives to what traditional banking is, and do so profitability,” Schulman said.

Unsurprisingly, most of the innovations are being geared toward smartphones or standard feature phones. After all, bank branches continue to close – particularly in neighborhoods where the median income is below the national average, Schulman said.

“The great thing is we don’t need bank branches anymore … you can do all of this now in the palm of your hand.”

American Express is asking academia to submit research for a newly launched financial inclusion lab. The credit card giant also is setting up a $100 million venture arm in Silicon Valley to invest in financial inclusion companies, Schulman said. Its first investment was a series B round, led by Omidyar Network and announced Thursday, in a company called Cignifi, which has developed a new solution for assessing creditworthiness.

The Shell Foundation, one of the bigger players in philanthropic capital, increasingly wants to deploy that money in a smarter way. Call it a “smart subsidy,” Simon Desjardins said. The aim is to provide money to companies in a way that doesn’t distort the end product or service. A few examples include adding talent, expanding into new markets and/or testing products in new geographies, or building prototypes.

Desjardins said he thinks in five to 10 years the worlds of social enterprise and traditional businesses will be increasingly indistinguishable.

“We hope that the impact investing world will not be needed in years to come,” said Desjardins, who runs Shell Foundation’s Access to Energy Programme, which has the goal of helping to provide access to modern energy services for the poor.

Sandhya Hegde, general partner at the Khosla Impact Fund, meanwhile thought there’s going to be plenty of need for debt financing for working capital – which was a big theme at this year’s conference.

But there are two big challenges for providing debt. One, in places where off-grid technology is most in need, the end consumer has no credit history. And two, young companies trying to provide it have no track record of profitability. Debt, she said, will still need impact investors for the foreseeable future.

Hegde said SunFunder, which offers debt to up to 20 companies in the solar space, is one good example.

’Data is a Wonderful Servant but a Terrible Master’

It is important to use data to guide decisions. “The most potent data is data that can be useful, presentable and user friendly so people get it quickly and use it,” said Aga Khan Development Network’s CEO Mirza Jahani.

Notre Dame Global Adaptation Index (ND-GAIN) measures risk and resilience of 177 countries and provides free and open source data for decisionmakers. However, Joyce Coffee of ND-GAIN reminded the audience that there can be a real danger in making decisions on an index; rather, the goal of indices are to raise awareness and allow people to ask more questions.

Eric Cesal of Architecture for Humanity agreed by reciting a favorite quote of his: “Data is a wonderful servant but a terrible master.” Jahani also agreed with Coffee’s sentiments that we often forget to look at why the trends are occurring and pointed out there is a tendency to look more at quantitative than qualitative data.

Collecting impact data has tended to focus largely on reporting success. Jahani says they are increasingly finding that this type of data collection is limiting in two ways: 1) it doesn’t allow Aga Khan to make changes as quickly as they’d like to or need to in conflict situations and 2) they are not capturing data on how people on the front line, such as farmers, are adapting their practices or what their most successful local staff is doing differently than the rest of their staff.

Cesal warned of what he calls “clipboard fatigue” in collecting data – when organizations repeat efforts and collect the same metrics from the same people. Too often a farmer is asked by six different groups over the course of a year whether he has a tin roof or not – all while not being provided with any valuable information such as which fertilizer to use. Cesal said such cases are almost a “criminal waste of resources” and not only is it frustrating and humiliating to the people on the other side of the questions but it also blocks the ability of people to make decisions if such data isn’t shared.

Each panelist was asked where they’d like their data collection to be in 10 years. Cesal said he would like Architecture for Humanity to get “much better about establishing the benefits of what we do. We haven’t always been chasing the right metrics. I know that these projects are making a difference because I go to these communities and see the difference.” Jahani said he wants Aga Khan to use data to help replicate some of the great things individuals on the their team do – in particular he wants to capture what they do and how they do it. Coffee’s aspiration was for her group to conduct more localized assessments and for all players to enhance data visualization. And Manasee Desai of Innovations for Poverty Action would like to see more creative ways to measure things like empowerment.